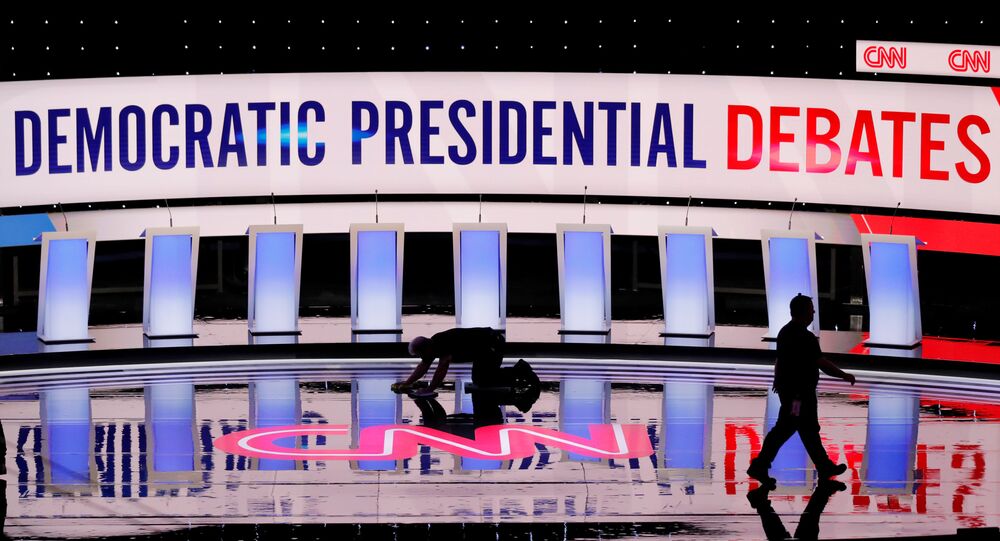 Ten Democratic candidates are expected to hit the stage in September for the third Democratic National Convention-sanctioned debate in Houston, Texas, following the committee deadline. However, the DNC is receiving pushback from the public and politicians for its inner workings and seemingly shady requirements for eligibility.

Wednesday marked the deadline for Democratic presidential candidates to meet the DNC’s qualifications for the third debate. In addition to having 130,000 unique donors, with at least 400 unique donors in 20 states, candidates were required to have at least 2% support in four or more DNC-approved polls between June 28 and August 28.

While there are several candidates with an array of viewpoints, the DNC is being critiqued by both the public and politicians for its handling of climate change and its shady debate requirements - particularly concerning how the committee “approves” polls.

Dave Lindorff, an investigative reporter and columnist for CounterPunch, joined Radio Sputnik’s Loud and Clear on Wednesday to discuss the results of the deadline and unpack the DNC’s motives.

“The party lost control of the primaries and they’re taking it back - they did in the case of Hillary [Clinton],” Lindorff told hosts Brian Becker and John Kiriakou. “That was where they really did steal the primaries from Sanders - and then they lost the [2016 presidential] election.”

The reporter went on to assert that DNC Chair Tom Perez, who he calls the “chosen hitman,” does the DNC’s “dirty work.”

Back in June, Perez published a Medium post in which the chair asserted that he was “unwavering” in his “commitment to tackling climate change” and the issue would be “discussed early and often” amongst the candidates in the primary debates.

However, several sentences later in the same piece, the chair says that it would be unfair to make the issue of climate change the basis of a debate because one candidate - Washington Governor Jay Inslee - had made it his signature issue.

More recently, Perez introduced the nine-point “Resolution Recommitting the Democratic Party to the Work of Combating Climate Change and Creating Jobs by Growing our Clean Energy Economy” proposal, which appeared to environmental activists to be yet another insider tactic to avoid having a climate change-centered debate.

Whereas Democratic candidates are proposing real solutions to the crisis; and whereas a forum is not the same as a debate, therefore be it resolved that Tom Perez needs to stop looking for excuses to not hold a climate debate.

“The DNC does not want to be the party that tackles capitalism and its relationship to climate change - which is what Sanders is doing,” Lindorff explained. “For the youth, climate change is the number one issue, not healthcare.”

Lindorff also pointed out that the listed requirements for making the stage of the third debate were part of how the DNC and arms industry shut down anti-interventionist politician Rep. Tulsi Gabbard.

Just as the DNC fears the loss of potential funds and power if the coal and oil industries feel targeted by increased pressure to address climate change, there is also a glaring desire to not disrupt the US’ military-industrial complex.

In the case of Gabbard, she fell short of meeting the 2% or more in four DNC-approved polls between June 28 and August 28.

“Rep. Gabbard has exceeded 2% support in 26 national and early state polls, but only two of them are on the DNC’s ‘certified’ list,” Gabbard’s team told the Washington Examiner in a statement, “including those conducted by highly reputable organizations such as The Economist and the Boston Globe.”

Speaking to Fox News Wednesday night, Gabbard said that the DNC lacks “transparency” and said that there are deep seated issues within the party that need to be addressed rather than just serving personal interests. She also clarified that she does not intend on letting her failure to qualify for the third debate end her campaign.