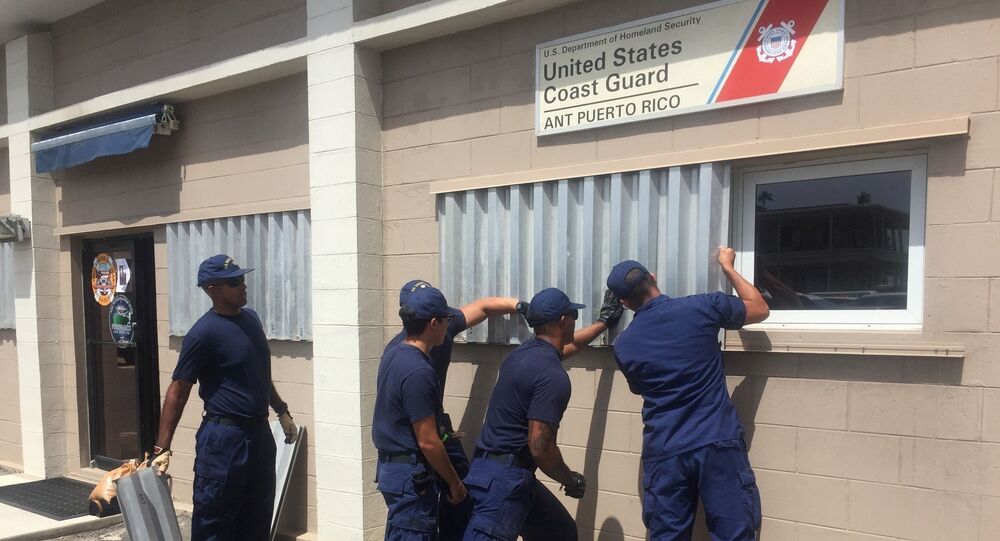 With the memory of Hurricane Maria still fresh in the minds of Puerto Ricans, the Trump’s administration's latest decision to transfer federal emergency funds to other projects has residents looking to their own survival needs, Aurora Santiago-Ortiz, Research Enhancement and Leadership (REAL) Fellow, told Radio Sputnik’s Loud & Clear Wednesday.

The Trump administration on Tuesday announced its plans to transfer $271 million from agencies under the control of the US Department of Homeland Security, including the Federal Emergency Management Agency (FEMA), to fund more Immigrations Customs Enforcement (ICE) detention beds. The announcement came as a powerful new storm that is now Hurricane Dorian began moving toward Puerto Rico.

Following the storm reaching hurricane status Wednesday as it passed just east of Puerto Rico, the US state of Florida declared a state of emergency in anticipation of the hurricane striking later this week.

In his usual fashion, US President Donald Trump called Puerto Rico “one of the most corrupt places on Earth,” on Twitter Wednesday, also noting that Congress “approved billions of dollars last time” a hurricane struck the island but that it was all sent to “crooked politicians.” Just a day prior, Trump tweeted that Congress approved $92 billion for Puerto Rico last year after Hurricane Maria, a category 4 storm, devastated the island.

​“Well, I think there’s a number of things going on there,” Santiago-Ortiz told hosts John Kiriakou and Brian Becker, noting “the inaccuracy of the amount of money that supposedly was allocated toward disaster relief in Puerto Rico.”

“It’s been disproved a number of times. We’ve actually received $14 billion. We have been approved for $42 billion but that has not been dispersed to this point; it has only been $14 billion. And also, Puerto Ricans, you know, have been very grateful for the aid and support for those who have worked to restore power and for the organizations that came and assisted in the recovery efforts to Maria by showing … by thanking people for coming, by cooking meals for those that have assisted,” Santiago-Ortiz said.

“On the other hand, we are aware of the reaction that Trump has had toward Puerto Rico so we are not particularly grateful about the words that he has said about Puerto Ricans,” she said.

Seized by the United States in 1898 during the Spanish-American War, Puerto Rico has been a US colony ever since, although it’s been extended a degree of political autonomy from Washington. However, in 2016, its financial autonomy was effectively revoked by the US Congress amid spiraling debt problems.

Puerto Rico’s existing power system is about 28 years older than the average US grid. When hurricanes Maria and Irma unleashed their wrath on Puerto Rico last September, the majority of the island was left without power for months. Puerto Ricans were fearful that Hurricane Dorian could have similar effects on the island’s electric grid, Santiago-Ortiz explained. Fortunately, only the island’s northeastern corner experienced tropical storm-force winds.

“FEMA has not given [Puerto Rico] all the aid that it [was] supposed to. So people are obviously living with the trauma of … Maria, which is completely understandable. At this point, there are still hundreds of families that are living with blue tarps that FEMA has denied assistance to for various technicalities, such as, ‘You were not in your home during Maria, so we will not give you aid.’ But, of course, people had to protect their own lives and evacuate their homes,” Santiago-Ortiz noted.

“So, I don't think that the assistance for Maria what it is supposed to be,” she said. “I don’t think it’s going to be given in the proper way in this case. Actually, as we speak, the tropical storm has already made landfall in two of the island’s municipalities … which have been left in a vulnerable state after Maria and which are still recovering. More than half of their generators are not functioning.”

“So, as we see, the whole archipelago is in a very vulnerable state right now … We have already had power outages, at least in the northern central part of Puerto Rico. The power has been restored but it is not consistent,” Santiago-Ortiz continued.

“People [in Puerto Rico] have been getting ready for the past few days for the storm. So, people are still kind of traumatized. Water has run out of [some] supermarkets … so people are still very much marked by the experience of Maria … I heard other people talking about not being able to get gasoline because it had run out. So I think people are on high alert. People are worried about things like power, things about not having [access to] ATM machines to get cash. It’s not so much the nature of the environmental effects but the aftermath of what happens and seeing the lack of response from the local and federal government has people in self-organizing mode,” Santiago-Ortiz explained.

Florida Governor Ron DeSantis on Wednesday issued a state of emergency for 26 counties regarding the projected arrival of Hurricane Dorian on the state's eastern coast later this weekend. Weather reports suggest the cyclone could reach Category 3 strength by the time it reaches the state on Sunday, according to the National Hurricane Center.