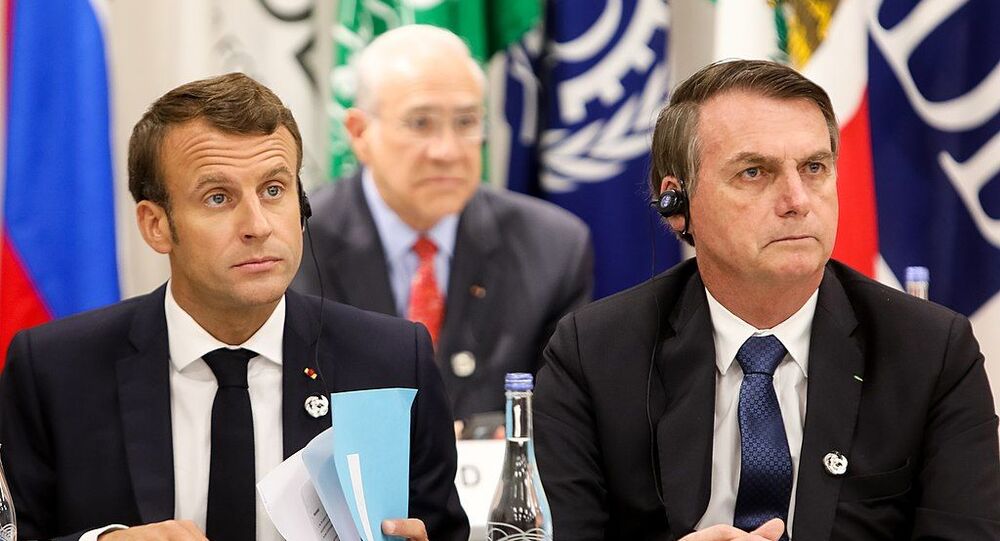 Brazilian President Jair Bolsonaro on Tuesday rejected $20 million in aid offered by the G7 countries to curb the raging wildfires in the Amazon after French President Emmanuel Macron called him a liar and is using the dispute to stem his flagging political support at home.

With Macron now demanding an apology, it seems as though the politicians are just grandstanding while the Amazon burns away, Aline Piva, a journalist and a member of Brazilians for Democracy and Social Justice, told Radio Sputnik’s Loud and Clear on Tuesday.

After initially rejecting a $20 million offer from the world’s seven largest economies to tackle the fires in the Amazon rainforest Tuesday, Bolsonaro adopted a less harsh stance a few hours later.

"Did I say that? Did I?" Bolsonaro told reporters in Brasilia.

"First of all, Macron has to withdraw his insults. He called me a liar. Before we talk or accept anything from France ... he must withdraw these words, then we can talk,” Bolsonaro added.

Last week, the French president told reporters that Bolsonaro was a liar for promising to fight global warming during the G20 summit in Osaka, Japan, in June. Bolsonaro retaliated by claiming the French president was meddling in Brazil’s domestic issues, accusing Macron of “colonialist and imperialist practices,” Vice reported.

“Don’t humiliate the guy. Ha ha,” a reply from Bolsonaro’s account read under the meme.

"He had [made] extremely disrespectful comments towards my wife," Macron said at the G7 summit in Biarritz, France, on Monday.

The Amazon, responsible for producing 20% of the world’s oxygen, has been on fire for the last three weeks, prompting widespread global concern among environmental experts over the Bolsonaro administration’s anti-climate policies that have promoted land clearance.

Piva told host John Kiriakou that Bolsonaro is “using the international response backlash to, first of all, try to get more traction with his base. Yesterday, a poll came out showing that his rejection [by Brazilians] has escalated from 19% to 39% of the population, so he’s not doing very well and needs to hold to the 20% of his core base to stay in power and continue to have some support within the country.”

“So, what he is doing is using the international response to gather his base together … He’s rolling back and dismantling environmental protection that we had on the Amazon,” Piva added.

“Just yesterday, they [the Bolsonaro government] announced that they were willing to receive Israeli troops that were coming here to help [contain] this spreading of the fires, but nothing concrete has taken place so far. The Bolivian government has done far more; they have [deployed] firefighters and also planes that help to stop the spreading of the fire, but the Brazilian government has done very little,” Piva explained, saying the leaders of the Brazilian government “are using this more as a political fight … than anything else.”

While the world has been focused on the Amazon wildfires in Brazil, many of neighboring Bolivia’s tropical forests are also currently ablaze.

Bolivian President Evo Morales announced Monday that 4,000 state employees and volunteers are currently trying to put out the fires in Bolivia. Although Bolsonaro declared Friday that he would be sending 43,000 troops to put out the Amazon fires, Brasilia hasn’t done much else to quell them.

Morales also set out to rent a Boeing 747-400 supertanker, used to fight wildfires, from Colorado-based Global Supertanker. The giant jet was spotted dumping its 19,000-gallon load on blazes in the highland country on August 23.

Photos also emerged Tuesday of Morales with firefighting brigades in Chiquitania, a region of tropical savannas in eastern Bolivia, fighting the blazes himself.

​“Probably he [Bolsonaro] would accept [aid] if it comes from the US or Israel, which are the preferred allies right now. Other aids might come with some backlash. For example, today he said he would only accept the G7 aid if Macron would apologize to him. He’s using this to leverage his politics,” Piva added.