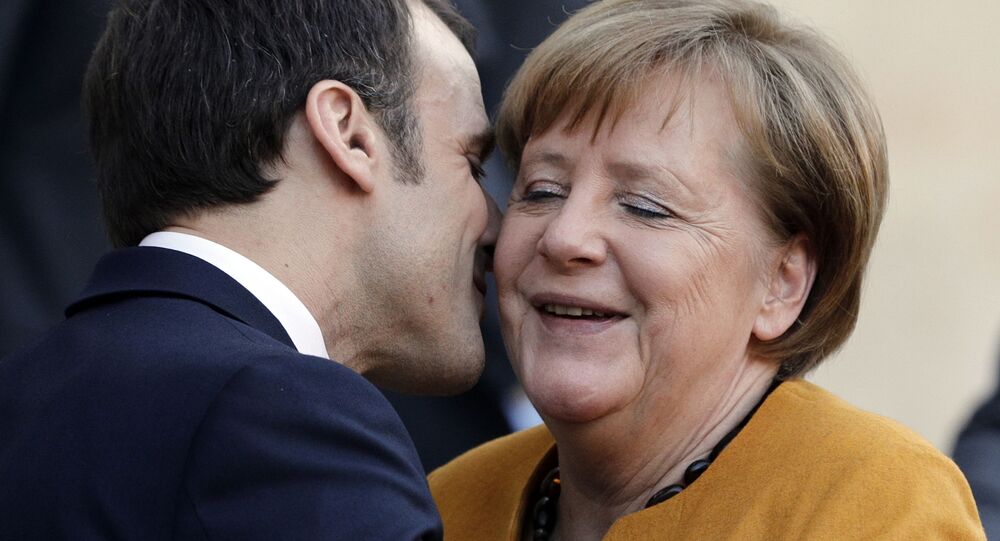 Merkel-Macron EU Leadership Contest: What do the Western Balkans Have to do With it?

German Chancellor Angela Merkel's statement on EU enlargement saying that European unity won’t be complete without the Western Balkans nations joining the bloc was first and foremost a message to French President Emanuel Macron, not the Western Balkans. And the message was that even if Merkel herself is leaving politics this does not mean that Germany is giving up its leadership role and its vision of the EU to France.

On 19 August, speaking at the 30th anniversary of the Pan-European Picnic in Hungary, Merkel said: "If you look at things geostrategically and also look at the map then there will only be a truly united Europe with the states of the Western Balkans”.

Even though Merkel’s remark is an optimistic sign for Serbs and revives their almost dying hopes of EU membership, her rhetoric indicates the depth of the crisis that Brussels is going through.

Political analyst Sasa Adamovic believes that the German chancellor’s statement has only highlighted the deep divisions in the bloc over the future of the EU itself. He also noted that after Britain leaves the European Union, key roles in Brussels will be split between Germany and France, whose leaders have contradicting views on EU Balkan enlargement.

“From their statements it is clear that they have very different positions when it comes to the future of the EU, given that Germany continues to insist on enlargement, primarily to include the Western Balkan states, while Macron suggests waiting to accept new members until the bloc handles its own issues, that is, until the direction in which the EU is heading is determined”, Adamovic said.

The political analyst emphasised that at the same time Belgrade should not misinterpret Merkel’s statement in their favour since Berlin’s position on Serbia’s accession to the EU is known and hasn’t changed recently. It implies that Serbia should recognise Kosovo and as a highly desirable condition suggests a unified and centralised government in BiH (Bosnia and Herzegovina) to the point of abolishing Republika Srpska*.

According to the expert, in both cases, Serbian national interests would be irreparably damaged and Serbia would lose rather than win from joining the EU under such conditions.

In the meantime, Adamovic noted that Belgrade should closely watch the situation within the EU:

“At the moment, perhaps, we could do some kind of EU monitoring to observe in which direction it is heading. Taking into account that in the last five years the Brussels elite has plunged the EU into a deep crisis, and the fact that there have been no significant changes in the EU leadership, it can be assumed that in the next five years the situation in the bloc will only get worse”, the Serbian expert warned.

To the question of whose vision of the EU’s future will prevail in this fight for leadership - Macron or Merkel’s, Adamovic said that this is rather difficult to determine because there is also a third view. According to him, the idea of a centralised, united Europe, requiring member states to sacrifice their national sovereignty in favour of Brussels is opposed by Italian Deputy Prime Minister Matteo Salvini, who insists on returning national sovereignty to EU member states and protecting EU borders.

“In any case, there is an interesting and rather intense struggle within the EU itself between three different concepts for its future, and if I had to choose one of them, I would prefer sovereignty, because it is in line with our idea of ​​protecting state and national interests. First of all, this concerns Kosovo and Metohija and Republika Srpska”, Adamovic concluded.

*Republika Srpska - Serb Republic, is one of Bosnia and Herzegovina’s two autonomous regions or “entities”, established under the Dayton peace agreement that ended the 1992-1995 Bosnian War. Republika Srpska's President Milorad Dodik has repeatedly said that Serbs' long-term goal is secession from the rest of Bosnia.

The views expressed in this article do not necessarily reflect the official position of Sputnik.