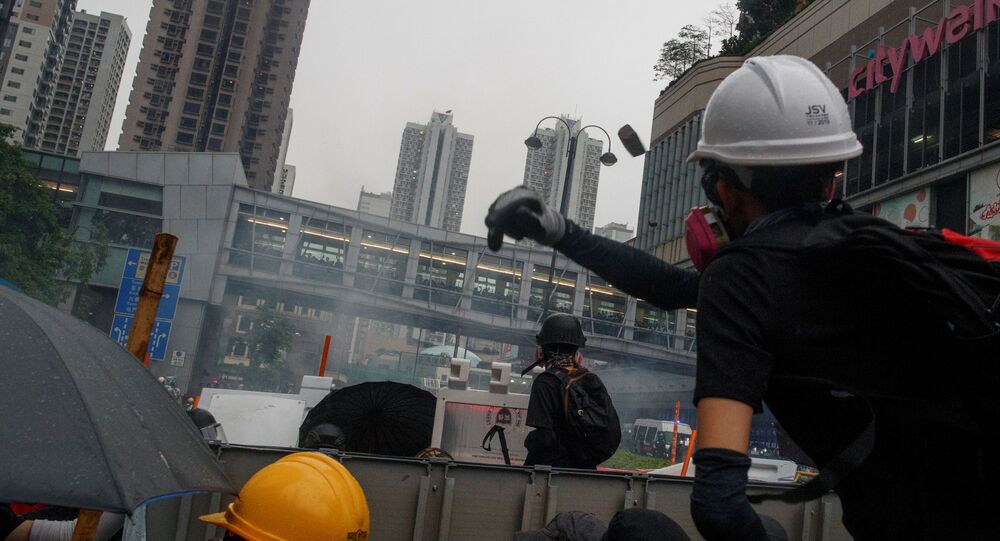 Hong Kong police have shown “great restraint” amid increasingly violent attacks by anti-Beijing demonstrators, an antiwar activist told Sputnik. The increase in protester violence despite that restraint, and its similarity to other pro-US movements, belies deeper manipulation by Washington.

Mike Wong, the outreach coordinator for the San Francisco chapter of antiwar organization Veterans for Peace, told Radio Sputnik’s Loud and Clear Monday that “the story being pushed by the mainstream media in both the United States and other Western countries” wasn’t “a fair or realistic presentation” of the situation.

The Hong Kong protests took a turn for the worse over the weekend, growing increasingly violent. As protests turned into riots, police deployed new crowd dispersal weapons such as water cannons.

In the city’s far northwestern Tsuen Wan district, the confrontation between anti-Beijing protesters and Hong Kong police reached its climax, with police deploying tear gas to disperse the crowd and being met with bricks and Molotov cocktails.

​Police also brought up large water cannon trucks for the first time, using two trucks to encourage protesters to disperse. Footage shows the cannons being used to break through barricades and fired at the ground near protesters as a warning shot, but not directly into the mass of people.

In one dramatic incident, a large mob of stick-wielding protesters chased a small group of police down the street until one drew his pistol and fired it into the air as a warning, causing the demonstrators to stop in their tracks and beat a quick retreat.

In mainstream media coverage of the incident, only the gun-drawn police are given attention, with the New York Times’ reporter in Hong Kong, Austin Ramzy, tweeting he was “frightened just looking at” a photo of the armed cops.

​Presenting the issue in this one-sided format is common among Western media, which often flattens the issue into one of police suppressing so-called “pro-democracy” protesters, even though the protests were sparked by an extradition proposal for holding violent criminals accountable and not any kind of democratic or even free speech function.

“In order to extradite somebody, a crime has to be a crime both in Hong Kong and the receiving jurisdiction,” Wong told Sputnik. “It has to be serious enough to be punishable by at least seven years in prison, and political crimes, such as speaking out or any free speech action, is completely exempt.”

“This has been a problem ever since the [1997] handover, actually,” he noted. Hong Kong was a British colony from 1840 to 1997, when it was returned to Beijing’s control 157 years after being seized as a prize in the First Opium War.

However, the violence hasn’t just been focused on the police - it’s been turned on everyday Hongkongers as well, with several episodes of brutality shown by protesters against people merely suspected of being pro-Beijing. In one incident, an old woman was violently thrown from a Mass Transit Railway car.

Woman forcefully evicted from MTR car suspected of being a police officer - was ugly pic.twitter.com/zsrMOAoNE6

Hong Kong protesters attacked a shop because they claimed it’s owned by Triad...pic.twitter.com/BsXJGlJOfF

​Protesters have also attacked pro-Beijing demonstrations, which do not confront the anti-Beijing crowds.

So this is how the pro-Beijing taxi protest was received: "pro-democracy" "peaceful" demonstrators attacked them, shining those damn lasers in the drivers' eyes & took their flags: https://t.co/KtEPLs5l4b

​Another clash in Kowloon Bay saw 29 protesters arrested amid the setting of fires and building of barricades in the streets of the neighborhood.

“Police, for a long time, acted with great restraint,” Wong said, despite having their personal information published online by protesters, who then attacked the officers’ homes and families. “Initially, when demonstrators went into the legislative building of Hong Kong and trashed the place and put graffiti all over and destroyed things, the police actually pulled back and were not even physically present during that time.”

Wong noted that the CIA-funded National Endowment for Democracy (NED) has been instrumental in building a base of anti-Chinese sentiment among Hongkongers for decades, especially playing up fears that the extradition law might result in the suppression of freedoms enjoyed in the semi-autonomous city, which exists as a Special Administrative Region separate from the People’s Republic of China.

Wong called attention to the fact that other US-backed “color revolutions,” such as in Nicaragua, had played out the exact same way as in Hong Kong.

The activist told hosts Brian Becker and John Kiriakou that the protesters’ increasing violence was “bait” for the police that the Chinese police and People’s Liberation Army were “so far not taking.” While PLA forces have drilled in nearby Guangdong Province on riot suppression and their vehicles have been spotted in the adjacent city of Shenzhen, so far, suppression of the protests has been left purely to the Hong Kong police.

“If this had happened in the United States, they would’ve been using lethal force long ago. If necessary the National Guard would have come in; they would’ve been out there with armored vehicles. There’s just no comparison,” Wong said.