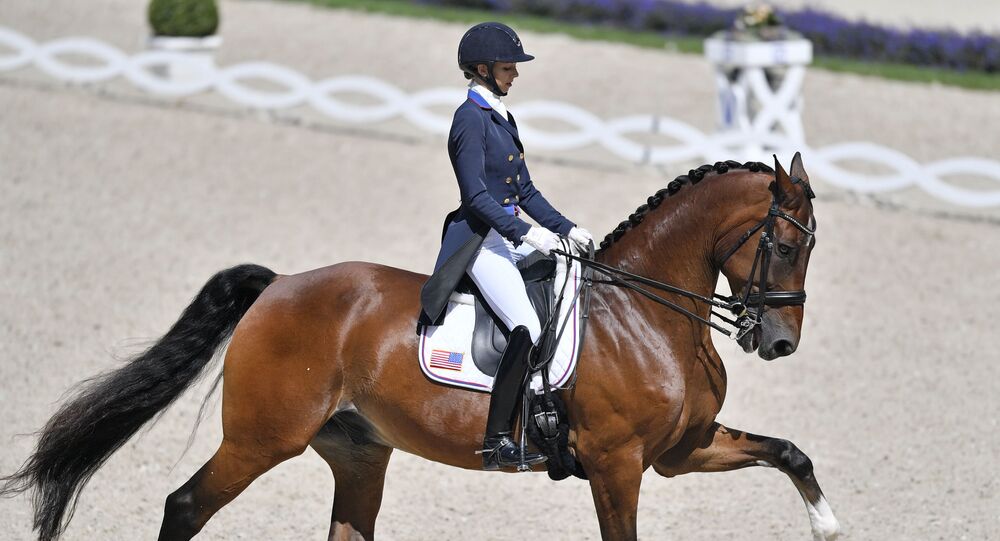 The 12-21 July 2019 equestrian competitions in Aachen, Germany, have yet again demonstrated that pleas from the public, animal rights activists, and veterinarians have 'fallen on deaf ears' of riders and show organisers, say longtime horse trainers Carel Eijkenaar and Hector Carmona Jr.

WDR's Quarks carried out an independent investigation and found that most of the competing horses were subjected to the rough and unhealthy riding practice known as "Rollkur", i.e. hyperflexion of the horse's neck, which was banned by the International Federation of Equestrian Sports (FEI) in 2010.

To ease sentiments, the organisers of the event, the Aachen-Laurensberger Rennverein e.V. (ALRV), and the German Equestrian Federation (FN) announced ahead of the CHIO Aachen 2019 event that they would deploy special "info stewards" in order to make the sport "more transparent".

According to Carmona and Eijkenaar, the good news is that info stewards Thies Kaspareit and Wolfgang Egbers were indeed dispatched to the event, but the bad news is that non-horse-friendly riding and Rollkur have yet again been noted by spectators at the equestrian competitions. The trainers complained that no one was held responsible for the reported animal abuse.

"Photos and videos surfaced once again clearly showing abusive training is the accepted norm and in order to succeed this norm of conduct must be followed", Hector Carmona points out.

According to the trainer, the situation at the recent CHIO festival evoked strong memories of the 2010 FEI conference that outlawed Rollkur but permitted the friendlier sounding "Long, Deep and Round" (LDR) technique to demonstrate that they were taking appropriate action. In reality, LDR does not differ from Rollkur and is equally damaging to horses' health, argues Carmona.

Why Riders Were Warming Up in Indoor Arena

The trainers drew attention to yet another controversial episode during the German festival in July: some riders were warming-up in an indoor arena, hidden from the view of the general public in an apparent attempt to avoid scrutiny.

According to the FEI-approved document, the indoor arena could be used "only in case of bad weather", i.e. rain, wind, heat, etc. Still, it was fine, dry and mild weather in Aachen between 12 and 22 July, spectators and Facebook users say, raising questions as to why the event organisers allowed equestrians to warm up indoors.

"The question is who in their right mind would prepare their horse in the stifling atmosphere of an indoor arena where there is no air when there is more than ample enough room outdoors and fresh air?" Carmona asks rhetorically.

The trainer notes that it is not the first time that warm-up arenas were hidden from view: during the 2012 Olympic Games, a pink fence was erected around practice areas to keep the public and accredited journalists away. Likewise, cameras were prohibited at warm-up arenas at the 2013 European Championships, he adds.

Another problem, according to the trainers, is that sometimes stewards prefer to stay quiet about horse abuse fearing backlash from famous riders. Carmona and Eijkenaar refer to the case of Leif Tornblad, a Danish five-star judge, who was temporarily suspended in 2017 after discussing the training methods of celebrated Dutch trainer Sjef Janssen, an advocate of Rollkur, in an interview with The Horse Magazine. Tornblad was accused of not being "neutral" towards the Dutch team's style of riding while mentioning that some of their horses were "tense".

The FEI and European national clubs remain mostly "hush-hush" on the non-horse-friendly riding problem, the trainers say. Eijkenaar, who is a member of the International Dressage Trainers Club, lamented the fact that the July 2019 Global Dressage Foundation Meeting had failed to draw public attention to instances of Rollkur practised by European riders.

Yesterday, we had the pleasure to discuss a milestone in #animalhealth: innovative #stem #cell therapy to treat #lameness in #horses at a #press conference @CHIO_Aachen. #future #equine #chioaachen pic.twitter.com/uS2FlUpinK

He also expressed dissatisfaction about the fact that although two info stewards were present, the FN failed to publish questions asked by the audience.
"I had expected that there would be, let's say, two days later, or a week later, for example, a publication of all kinds of questions that had been put forward by interested people; by the audience, and by trainers, but none of that was published either", Eijkenaar notes. "So we have no idea what questions were being asked, and how the National Federation of Germany dealt with them".​

While Longines FEI European Championships are taking place in Rotterdam, the Netherlands, between 19 and 25 August, Carmona and Eijkenaar highlighted the importance of the harmonious development of a horse as per "Training Pyramid" and consisting of six fundamental principles: rhythm, relaxation, connection, impulsion, straightness and collection.

The roots of the concept originated in the German military doctrine outlined in the early 1900s, to ensure that horse riding traditions were adhered to by all generations of riders. It was later adopted by dressage judges to evaluate the basics demonstrated in dressage tests. However, some modern riders have broken away from tradition.

"[Currently], lots of horses are in a state of 'hyper-tension' created by forceful riding. There is a pyramid of training, a logical programme to build-up a horse," says Eijkenaar, emphasising the importance of a horse's "inner relaxation" without which neither communication between rider and horse nor training can be carried out.

"The training is education," echoes Carmona. "Anyone who values his/her horse would never resort to Rollkur/LDR and hyperflexion, but since this is not the case, it explains why horses today are barely 'held together' with the help of veterinarian's needles".

Hector Carmona Jr is a horse trainer and clinician who was a member of the International Federation for Equestrian Sports (FEI) up until the mid-1990s as a competitor. Carmona was born in 1957 in Chile. He is known for training the high-scoring gaining horses Santana, Lillen, Jasmine and others in the US. In Europe, Carmona has been retraining Rollkur/LDR horses for students over the last several years. He is a son of Major Hector Carmona (1925-1987), a retired Chilean cavalry officer, who founded the Los Alamos Dressage Centre in the US in 1966, took part in the South American Games, Pan American Games and the Olympic Games. Major Carmona coached the United States Equestrian Team's dressage riders and trained five Grand Prix horses.

Carel Eijkenaar is an FEI Dressage Trainer & Instructor and an FNRS and FEI international dressage judge. He was born in The Netherlands in 1946 and was in charge of running the stables at the Dutch Cavalierly between 1966 and 1968. Eijkenaar owned and managed the 'Osterbeeks Ruiter Centrum' Riding School and Dressage Training Centre in The Netherlands between 1976 and 1990. In 1996, Carel became a member of the International Dressage Trainers Club. He has worked as a freelance dressage trainer in Israel since 1990, in Cyprus since 1994, and in Greece since 1995. Eijkenaar has been an Honourary Member of the Israeli Equestrian Federation (IEF) since 1985. He has worked as a coach and trainer for upper-level riders including at the Grand Prix, since 2006, in the United States.