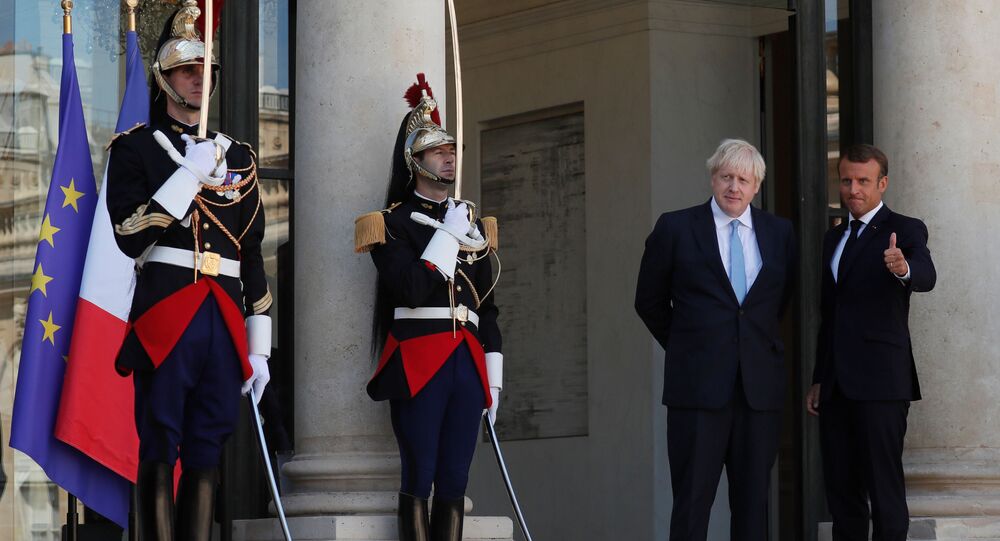 UK Prime Minister Boris Johnson has held talks with German Chancellor Angela Merkel and French President Emmanuel Macron this week. One of the main topics on Johnson's agenda was Brexit as the UK has only two months left before it is scheduled to leave the EU.

Donnacha Ó Beacháin, Associate Professor at the School of Law and Government, Dublin City University (DCU), reflects on the reasons behind Johnson's visit to Germany and France and on the prospects for the UK's withdrawal from the EU.

Why is Boris Johnson meeting Angela Merkel and Emmanuel Macron this week? The answer is quite simple. Having failed to make any headway with the EU institutions, the British PM is trying to circumvent them by appealing directly to individual governments to see if he can identify cracks in the EU’s position. That he has chosen to speak with Merkel and Macron first also chimes with the notion that Germany, France and the UK, as natural peers in terms of power and prestige, can thrash out a deal, irrespective of what other, smaller, members of the EU might think. Theresa May also employed (unsuccessfully) this “divide and rule” tactic and it’s highly unlikely that it will bear dividends for Johnson. Ultimately, it’s a strategy designed more to impress domestic opinion back home than in the EU.

Macron and Merkel are singing from the same hymn sheet. They have been polite but resolute when receiving their British guest. Many pro-government outlets in the English media today have – it can only be assumed deliberately – inflated Merkel’s comments when welcoming the British premier. The Daily Mail today, for example, runs with a headline stating that Johnson received a ‘boost’ from Angela Merkel as she said a deal could be done and the backstop ‘ditched’ within 30 days if the UK came up with an alternative. There is absolutely nothing new in this. The Chancellor simply said that if the British Government could provide a solution to the conundrum, reconciling its wish to leave the Single Market and Customs Union, with maintaining the status quo in Ireland, then a breakthrough could be achieved, even in 30 days. This has been the EU position all along. Macron and Merkel have communicated that they will do what they can to help the British deal with their internal political crisis but that the EU is not going to change its rules, its character, or its aspirations, to satisfy the whims of Brexiteer ultras.

In terms of the likelihood of a breakthrough, there is little space for accommodation and the timeline is extremely tight. This is completely the fault of the British Government, which prematurely started the clock ticking by triggering Article 50 when they had no plan for how to withdraw, and then wasted most of the extension they requested earlier this year by indulging in a Tory party leadership contest and a parliamentary summer recess. As Britain’s nearest neighbour, Ireland is the most vulnerable to Brexit, deal or no-deal. As the Irish Times recently editorialised, in Boris Johnson the EU is facing a negotiating partner who is threatening to set himself on fire unless he gets what he wants. Unfortunately, the paper concluded, Ireland is locked in an enclosed space with this irrational actor.

When Boris Johnson came to office a month ago he said he would not meet EU leaders until they agreed to change their position on the so-called “Irish backstop”. It says much about how little credibility Johnson enjoys that this unexplained U-turn – for he meets them now without any such concession - has largely escaped comment. But while he is travelling geographically to other countries, Johnson’s mindset doesn’t seem to have shifted at all. Johnson's approach reminds me of when one occasionally sees his compatriots in a foreign country trying unsuccessfully to communicate in English and they think that if they simply speak more slowly and louder than their point will be understood, and their request granted, when in fact the problem is that they are speaking completely different languages.

The British Government has continually misunderstood the asymmetry of the UK-EU relationship and that the Anglo-Irish dynamic has also fundamentally changed as a result. This week Johnson suggested that Dublin and London could come to some private arrangement regarding the border and the backstop or that Ireland might diverge from EU regulations in order to converge with those of the UK. The Irish Government has rejected both suggestions. It pointed out that the EU negotiates on all matters relating to the Single Market and Customs Union and that there can be no bilateral deal on the subject between Dublin and London. The fact that the proposal was made at all says much of the British Government’s approach and assumptions. It is as if Ireland, as a smaller country, is not permitted to have national interests if they collide with those of the UK.

It will be interesting to see how Boris Johnson and Donald Trump enter negotiations when the UK is very much the weaker party. Only yesterday, when dealing with Denmark, President Trump provided ample evidence that he is an unpredictable and self-interested character who very much believes in projecting power over weaker allies. This is a lesson that should not be lost on the British government. Moreover, the Johnson "plan" is to ditch the backstop in order to get a US trade deal. But all evidence suggests that if Johnson reneges on the backstop there will be no US trade deal. Richard Neal, who heads the US Congressional Committee on Trade, along with House Speaker Nanci Pelosi, pointed out that Congress writes trade agreements, not the President, and that the legislature will not approve any deal with the UK if it undermines the Good Friday Agreement.

Ireland and the Backstop

One of Johnson’s central arguments is that the so-called “Irish backstop” is undemocratic. His only rationale seems to be that it prevents the achievement of the type Brexit his administration is seeking. However, the vast majority of people in Ireland, north and south, approve of the backstop. The importance of maintaining an invisible frictionless border is about trade, interpersonal relationships and, most importantly, the peace process. There are roughly 300 official border crossing on the island of Ireland, substantially more than the 137 that border the EU’s eastern flank from the Baltic Sea to Turkey. Joint membership of the Customs Union and Single Market greatly encouraged the normalisation of cross-border relationships throughout Ireland and protecting these gains has become a major focus of EU policy.

The most obvious way around this impasse is to create the border in the Irish Sea. This is how Theresa May initially tried to square the circle of Britain leaving the Single Market and Customs Union while maintaining the status quo in Ireland. But this is unacceptable to the Democratic Unionist Party who, though a minority opinion in Northern Ireland on Brexit, Johnson needs to prop up his government. All signs are that he is preparing the ground for a general election, in part to liberate himself from these truculent (and temporary) allies.

The backstop was agreed to by the British Government less than two years ago when Boris Johnson was foreign secretary, as were the issues of Britain’s financial obligations and the rights of EU citizens in the UK. The position of the Johnson administration now is that they are no longer bound by these solemn commitments and that everything is again up for negotiation. But when the British premier wrote to Donald Tusk earlier this week his main argument was that the withdrawal agreement and the backstop should be ditched in favour of “trust” and “goodwill”, currencies which are at this stage in conspicuously short supply. In refusing to honour solemn international pacts – including the Good Friday Agreement that cemented the peace process in Northern Ireland - Britain is becoming something of a rogue state in international relations.