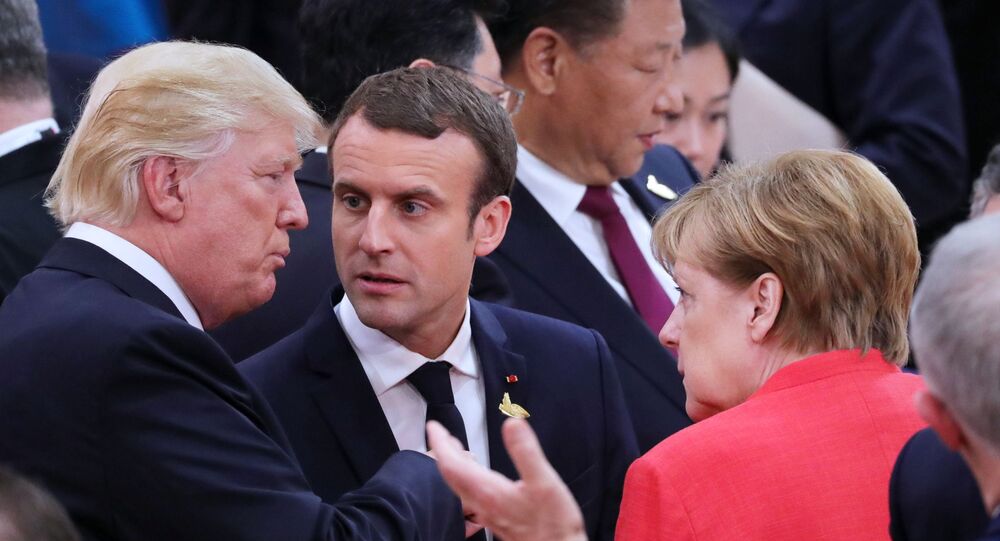 Donald Trump has again spoken out in support of Russia's readmission to the Group of Seven. American researcher and author Dr George Szamuely discussed what impact the US president's words could have on the rest of the G7.

On Tuesday, US President Donald Trump again endorsed the idea of Russia's re-joining the G8 group of industrialised countries ahead of the group's 45th summit which is due to take place on 24-26 August 2019, in Biarritz, France.

"I think it's much more appropriate to have Russia in," Trump told reporters during his meeting with President Klaus Iohannis of Romania, adding that he would back the idea of Moscow's readmission to the group if “someone” proposed it. "It should be in the G8 because a lot of the things we talk about have to do with Russia," he added.

It was reported later that Donald Trump made the statement after talks with his French counterpart Emmanuel Macron, on August 20 when both agreed that they wanted to see Russia at the 2020 G7 meeting despite a statement from the French side that Russia’s return to the G8 depends on a successful resolution to the crisis in Ukraine.

Dr George Szamuely, author and senior research fellow at the Global Policy Institute, a Washington, DC-based think tank, says that Trump would support Russia's readmission if someone else proposed it, but cautioned that no one “other than the US [was] pushing for this.”

"I don't think it's very likely that Trump's statement will have much of an impact on the G7," says Szamuely.

The question then arises as to who else among the G7 member states could spearhead Moscow's readmission. According to the professor, Italy is the most probable Russia backer.

"Of the current members of the G-7, only Italy – particularly if Salvini were to become prime minister – would support Russia's return," Szamuely added.

Commenting on France's stance, Szamuely suggests that despite Macron's positive rhetoric during his phone call with Trump and the French president's courteous attitude towards Russian President Vladimir Putin during their recent meeting, the Élysée Palace would not support Russia's return at this juncture.

"[Macron] made it conditional on what he termed the 'resolution of the conflict in Ukraine,'" Szamuely says. "Now, should circumstances change and relations between Moscow and Kiev improve dramatically then Macron might well support Russia's return even before the end of all conflict in the Donbass,"

As for Germany, UK and Canada, they are "definite 'no's", he believes. According to him, although the Council of Europe voted to return Russia's voting rights in late June, antipathy towards Russia is still strong among European elites, driven by Russophobic propaganda.

"Relations between the EU and Russia have improved, as evidenced by Russia's return to the Council of Europe, however, the anti-Russian propaganda barrage is so great that it's unlikely that any substantial change in Russia-EU relations is likely for a number of years," he says.

Russia was expelled from the Group of Seven – comprising Canada, France, Germany, Italy, Japan, the United Kingdom, and the United States – in 2014, after Crimea's reunification with Russia following a referendum backed by roughly 97 percent of the peninsula's residents.