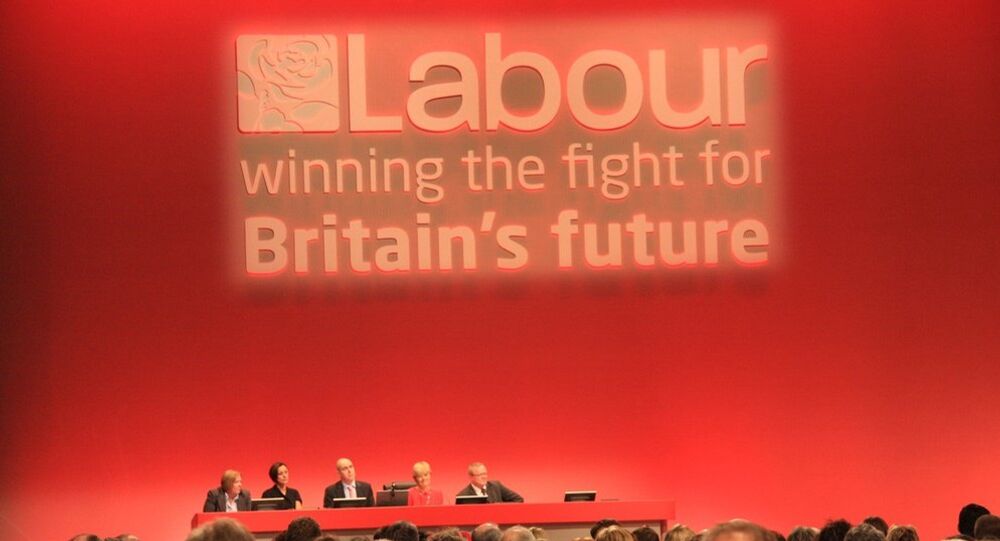 On Tuesday, the British Labour Party revoked Asa Winstanley’s press pass to report on the upcoming party conference without supplying a reason. The journalist told Sputnik he thinks it’s “part of a long-running witch hunt” against figures on the left who support Palestinian rights.

Winstanley, an investigative journalist and associate editor with The Electronic Intifada, told Radio Sputnik’s By Any Means Necessary Tuesday he was all set to cover the Labour Party’s annual conference, which is being held in Brighton from September 21 to September 25. Then, just days after a report critical of his outlet’s anti-Zionist reporting was published by a major pro-Israeli lobbying group, his pass was mysteriously revoked.

“For the Labour Party itself, the conference is supposed to be its supreme democratic decision-making body. It’s supposed to set policy, which the party leadership and its MPs should then follow. That’s supposed to be, in theory, how it works,” Winstanley explained, noting that under Tony Blair, the party conference had lost much of its real power, although since Jeremy Corbyn’s rise to party leader in 2015, participation had dramatically increased.

Winstanley said attending the event is especially important for him, a Labour Party member, as it gives him the time to report on the many Palestine-related events associated with the conference.

“There are pro-Palestinian organizations, Palestine solidarity groups - the Palestine Solidarity Campaign quite regularly goes to conference and tries to lobby Labour Party MPs to express more solidarity with Palestinians,” he explained, noting that pro-Israeli groups do the same thing.

“Now, with this ban on my attendance, it seems I’m not going to be able to do that from within the conference itself this year,” he said.

Winstanley told hosts Eugene Puryear and Sean Blackmon that the press pass revocation was “part of a long-running witch hunt against people in the Labour Party, on the left, and who support Palestinian rights, to smear them as anti-Semitic. This is something pro-Israel groups have been doing since they came into existence, really, and it’s something that’s really been targeted against the leadership of Jeremy Corbyn and the popular movement behind him, because Corbyn, for many years, was a very active part of the Palestine solidarity movement in this country. And it has been, really, the most successful attack vector against him, in my view.”

Winstanley was himself the target of an internal party investigation in March concerning several tweets he’d made that were critical of Zionism - an investigation he was himself unaware of before reading about it in the staunchly anti-Palestinian outlet The Jewish Chronicle. EI reported at the time that it was unclear how the investigation would affect Winstanley’s press pass application, noting that “if a press pass were not issued then the investigation into Winstanley would in effect be a form of censorship of a journalist with a long record of meticulously accurate and widely read reporting on the party.”

EI editor Ali Abuminah speculated at the time that the investigation might be part of an attempt to retaliate against Winstanley and the outlet “for reporting on the manufactured anti-Semitism crisis and the activities of Israel lobby groups.”

Other anti-Zionist campaigns in Britain have come under attack as well, including the Boycott, Divestment and Sanctions (BDS) campaign, an international movement inspired by the anti-Apartheid campaign in the 1980s, which aims at forcing Israel to comply with its obligations under international law to respect the rights of Palestinians. Allegations of anti-Semitism against BDS and the myriad groups that support it are common among pro-Israeli figures, and several counties, provinces, states and muncipalities have passed measures declaring it to be so.

In March, a document from the Office of the US Trade Representative (USTR) that laid out plans for a post-Brexit relationship with the United Kingdom listed London taking a most hostile stance toward BDS as one of its “negotiating objectives,” the Middle East Monitor reported at the time.

In the document, USTR said it hopes to “discourage actions that directly or indirectly prejudice or otherwise discourage commercial activity solely between the United States and Israel” and that the US seeks “the elimination of politically motivated nontariff barriers on Israeli goods, services, or other commerce imposed on Israel; and the elimination of state-sponsored unsanctioned foreign boycotts of Israel, or compliance with the Arab League Boycott of Israel.”

The United States’ Democratic Party has been similarly rent over the question of Palestine solidarity versus support for Israel.

Winstanley noted that with such high-profile figures at the conferences, security regarding who’s allowed in is fairly strict. Since he’d clearly assuaged all the party’s concerns regarding safety and was approved, he concluded there’d been “some sort of political decision by part of the Labour Party’s bureaucracy somewhere to revoke my press credentials.”

The journalist said no explanation was supplied - the email simply said, “Your application has not been approved,” despite a July email that stated the opposite in no uncertain terms.

“I can confirm that your application has been successful. Your pass will be dispatched in early September,” the July 22 email from Labour Party Conference Services said.

Winstanley noted the revocation came a few days after the publishing of a report by the pro-Israeli and anti-Palestinian lobbying group Community Security Trust that labeled EI as “the single most popular website” for reporting on the issue of alleged Labour anti-Semitism.

“I do think that it may have been the proximate cause of it,” he said, noting the group, which is technically a charity and funded partly by the British government, was “quite obsessed with denouncing Palestinians, smearing them as anti-Semites and Palestine solidarity activists as anti-Semites.”

“They can’t stop our reporting, so instead they seem to be determined to kind of do some sort of backroom deal or to kind of try and stop me from getting into the Labour Party conference in some way,” Winstanley said.

“These efforts are going to fail, because I’m not going to stop writing and reporting what I do.”