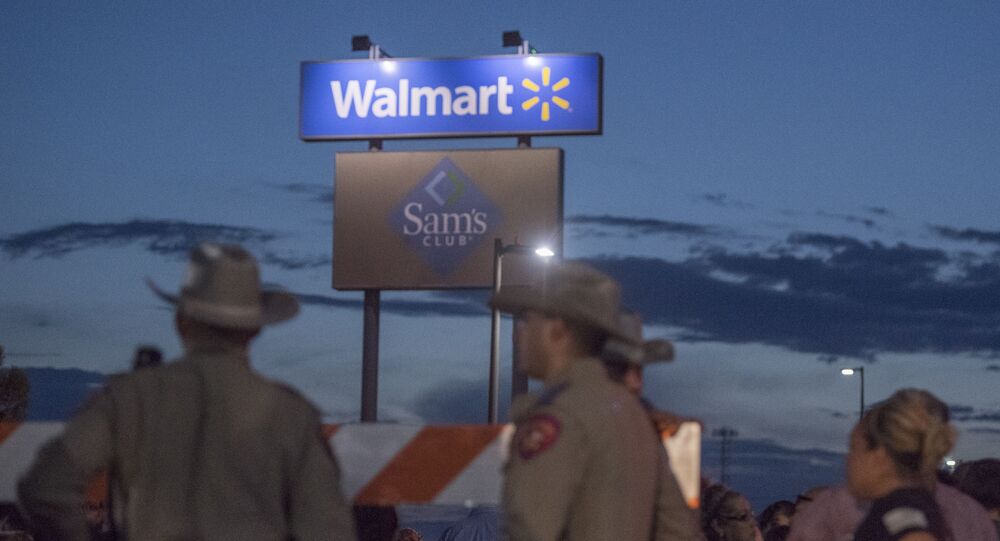 Long before the past weekend, when the US was shaken by yet another double-header mass shooting, President Donald Trump had voiced an opinion that’s worth contemplating in the current conjuncture: what if there’s a chance to stop a bad guy with a gun by simply having a good guy with a gun on the other side of the barricades?

US President Donald Trump called for “very meaningful background checks” for gun buyers last week in response to the weekend shootings in Ohio and Texas.

“Mental illness and hatred pulls the trigger, not the gun”, he clarified.

The backbone of his philosophy is that potential mass shooters will always acquire guns illegally, while draconian regulations would only render law-abiding citizens helpless.

​Three recent shootings in the United States revealed that three different gunmen had picked places, which some might describe as gun-free zones – Gilroy Garlic Festival in California, or a Walmart in a Texas shopping mall, or a bar area in Ohio. All these places are arguably soft targets as most perpetrators want to make sure that they can kill more people if they open fire at a venue where victims can’t shoot back.

While Trump’s stance has widely been criticised by Democrats, who occasionally use incidents of mass public homicides to push their gun control agenda, here are some instances somewhat proving that “a good guy with a gun” scenario is working – even in the United States.

In the aftermath of a massacre at Marjory Stoneman Douglas High School in Parkland, Florida, that killed 17 people in February 2018, President Trump suggested looking at the possibility of giving concealed guns to teachers with relevant training experience to protect students in case a “savage sicko” goes on a shooting rampage.

In a series of tweets, the commander-in-chief argued that a “gun-free” school is a “magnet for bad people”, and while his words were, as usual, met with much criticism, the idea is working perfectly well for America’s “greatest ally” in the Middle East – Israel.

I never said “give teachers guns” like was stated on Fake News @CNN & @NBC. What I said was to look at the possibility of giving “concealed guns to gun adept teachers with military or special training experience - only the best. 20% of teachers, a lot, would now be able to

....immediately fire back if a savage sicko came to a school with bad intentions. Highly trained teachers would also serve as a deterrent to the cowards that do this. Far more assets at much less cost than guards. A “gun free” school is a magnet for bad people. ATTACKS WOULD END!

​A school shooting is something virtually unheard of there: every such institution with at least 100 students has armed guards stationed outside the main entrance, with the security personnel being obliged to undergo training every four months.

By the end of the year 2018, POTUS’ federal commission on school safety released a report suggesting that educational institutions consider arming themselves and published certain guidelines for schools that may decide to hire trained personnel to protect students – the recommendations were evidently ignored.

Trump’s pro-gun initiatives did not end there: after a gunman killed 11 people at the Tree of Life Synagogue in Pittsburgh, Pennsylvania, in October 2018, the 45th made the following assumption: the “results would have been far better” if there was an armed guard.

Certainly, the idea did not receive a warm welcome from the wider public, but in April 2019, an armed off-duty border patrol agent, who “recently discovered his Jewish roots”, managed to stop the shooting at Chabad of Poway synagogue in California during Passover services. The gunman did kill one person and wounded three others, but he fled the building immediately after the officer opened fire and gave pursuit.

On top of this, it emerged last month that some US synagogues were running active gunman drills during services to train congregants how to act in the event of a real shooting. Some congregations have actually encouraged members to carry guns at services, while over 20 synagogues in the New York City area have taken self-defence courses to learn how to fight back against a gunman.

“If there was one gun being carried by one person from the other side, it very well could have been a whole different result”, President Trump told an Indianapolis crowd at a National Rifle Association (NRA) convention in April 2019.

He was addressing a series of terror attacks that sent shockwaves through Paris in November 2015, and argued that if even a “tiny percentage” of concert-goers at the Bataclan theatre had been armed, the carnage could have been prevented “because the cowards would have known there were people and they’re having guns”.

And there are, indeed, multiple underreported incidents when mass shootings in the United States have been stopped by a concealed handgun permit-holder. The FBI has documented no fewer than 19 times in a five-year-span (from 2014 to 2018) when active shooters were stopped by armed citizens.

For instance, just a few days before the Pittsburgh massacre last October, a man with a permit to carry a concealed weapon stopped a killer who was shooting black people at a grocery store in Louisville, Kentucky.

“In virtually all cases as soon as the murderer was met with gunfire, the murders ceased, the perpetrator either surrendering, committing suicide, or being killed by defensive gunfire. As soon as they come under fire, the mass murderers are thinking more about their own survival than killing more innocent victims. The armed rescuers have an excellent record of neutralising mass murderers”, Massad Ayoob, US firearms and self-defence instructor, says.

Views and opinions expressed in this article are solely those of the author and do not necessarily reflect the official position of Sputnik.