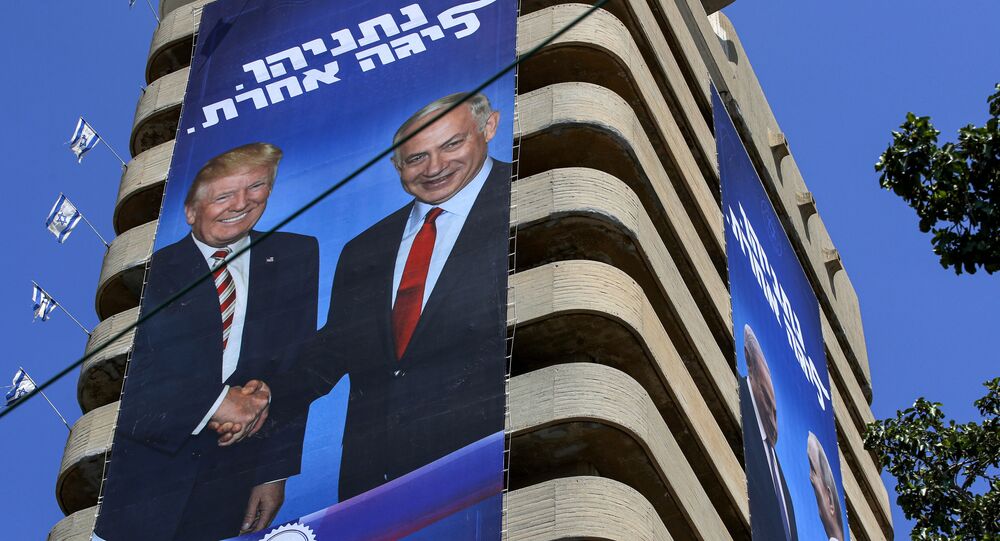 Israeli Prime Minister Benjamin Netanyahu is taking steps to receive official backing from US President Donald Trump for Israel’s claims on territories that it controls in the West Bank ahead of the upcoming elections, scheduled for September, The Times of Israel reported, citing an anonymous source in the prime minister’s office.

Professor Gabriel Ben-Dor, head of the National Security Studies programme at the University of Haifa, questions the probability of a public declaration from Donald Trump on the recognition of Jewish settlements in the West Bank and doubts whether such a declaration, if made, would have an impact on the Israeli vote.

Sputnik: According to the Times of Israel, Benjamin Netanyahu is seeking a public declaration from Donald Trump recognising Jewish settlements in the West Bank ahead of the September elections. How realistic are his expectations?

Gabriel Ben-Dor: Not very. This is a very different issue from the other two issues - Jerusalem and Golan - on which the two have cooperated so far. This is a much bigger issue, involves a great many risks and many changes, compared to what Trump is trying to accomplish in his famous "deal of the century" project. So I don't think he’s going to jeopardise and put at risk all the things that can be accomplished because of this.

Sputnik: How could such a statement impact the outcome of the Israeli elections, in your view?

Gabriel Ben-Dor: Well the Israeli elections are a very tough matter at the moment… so everybody is looking for some kind of an advantage and so to be any kind of diplomatic support from the major powers, like the US, has to be taken very seriously. But at the same time, I don’t think it’s going to be a decisive matter, because the issues are domestic, involving leadership, involving corruption charges, involving various difficulties within the parties and ideological issues, such as religion and such. So I think that while a very sympathetic populist statement by Trump might make some difference, it alone will not win the elections.

Sputnik: If the Trump administration goes ahead with this move, what reaction could we expect from the US allies in the Middle East?

Gabriel Ben-Dor: They will be very unhappy, obviously. I think the US will have to take into account the reactions from Egypt, Jordan, Saudi Arabia, and the UAE, all of whom will be very unhappy with this. So that’s another major factor which will prevent the Trump administration from making this kind of step unilaterally any time before the elections. So I don’t think that this is a realistic expectation. You’re quoting this "Times of Israel" piece, but of course anybody who follows Israeli politics know that there are a lot of other sources which think otherwise, and they don’t really take this possibility very seriously or realistically.

Sputnik: Earlier, US Special Envoy to the Middle East Jason Greenblatt said that Israel should not move ahead with plans to annex parts of the West Bank, at least before the Trump administration’s peace plan comes out…

Gabriel Ben-Dor: That’s a very good sign and I don’t think anything like that will actually happen.

Sputnik: What steps will the Trump administration take after unveiling the plan?

Gabriel Ben-Dor: At the moment the peace plan is not going anywhere, because we’ve had only economic part made public, which is something which is going to take a lot of time to make impact. The political parts of the plan are not clear at all. So the administration will have to come up some kind of political guidelines as to a future possible peace settlement and we haven’t seen any of this yet. In order for this to have a chance to succeed, the US needs cooperation from the various Arab parties concerned, and I think a unilateral declaration recognising Israeli sovereignty in the West Bank would frighten away these people, so I don't think it’s going to happen.

The views and opinions, expressed in the article are those of Gabriel Ben-Dor and do not necessarily reflect those of Sputnik.