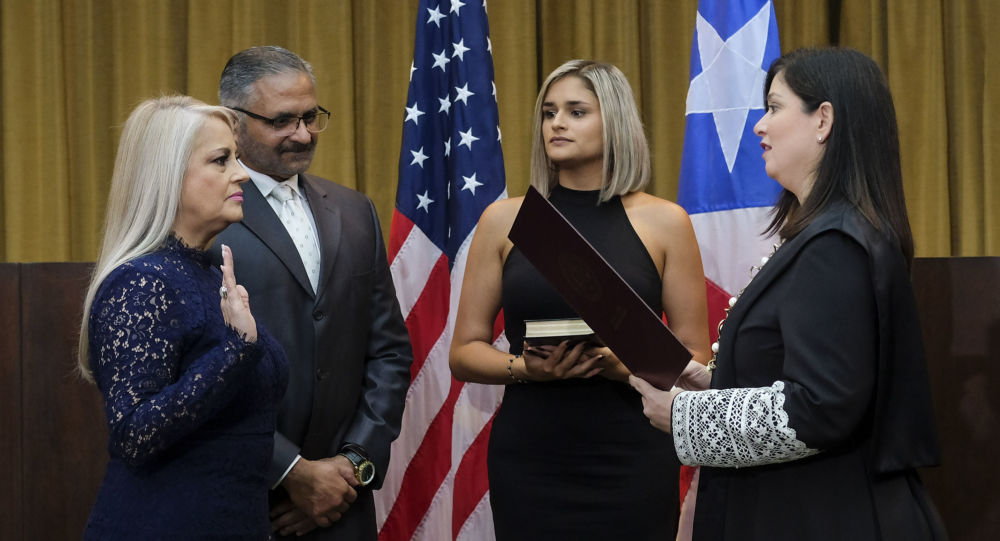 Wanda Vázquez Has ‘No Right, No Legitimacy’ to Be Governor Puerto Rico Needs

Vázquez’s rise to La Fortaleza follows the Supreme Court’s declaration on Wednesday that the swearing in of her predecessor, Pedro Pierluisi, was unconstitutional. He had only become governor five days earlier, on August 2, after being nominated for secretary of state by outgoing Puerto Rican Governor Ricardo Rosselló - an act that ensured Pierluisi would succeed him.

“[It is a] momentous, historic occasion to have the third governor in [that] many weeks here in Puerto Rico. I think there’s a lot of things still in movement, and it’s not clear yet if this is the stopping point or if there is going to be a fourth governor we will see in the coming weeks,” Garriga-López told host Brian Becker.

“Vázquez is a kind of a non-entity, politically speaking,” she said. “She, herself, admits that she is not a politician, and she claims that she has never wanted to be a politician. She was somebody who was appointed first to [Puerto Rico’s] Office of Women’s Affairs … [she was] not particularly a feminist, not somebody who was known for her involvement in feminist issues or women’s causes. In fact, she was a rather conservative figure, and she was placed there to neutralize the Women’s Affairs Office. And she was effective in doing that, because she didn’t really do much at all in that position for seven years.”

After Rosselló came into office, he “found her useful and placed her in the position of secretary of justice for the same reason: because she was somebody Rosselló could count on to follow orders and not really stir the pot too much. Ironically, now she is in the position of governor, which I'm sure is something that her party never anticipated,” Garriga-López explained.

“[Vázquez] is in a very difficult position politically, because the president of the Senate [Thomas Rivera Schatz] and her have had sort of dueling investigations of each other for ethical violations. Of course, both of them have had their hands dirty in various kinds of ways. Vázquez looked scared when she took the oath yesterday. On her face you could see she was uncomfortable. It’s really a shame that she is Puerto Rico’s second female governor and she is coming in under these circumstances and is so unprepared to be the political leader Puerto Rico needs right now,” Garriga-López continued.

Last week, Pierluisi, the former resident commissioner of the island, was named as acting secretary of state by Rosselló, after Luis Rivera Marín resigned from that post last month.

When the Puerto Rican Senate challenged Pierluisi’s swearing in with a lawsuit, the Supreme Court “stopped it because it was patently unconstitutional that someone could be appointed without confirmation as secretary of state in order for them to become governor, and Pierluisi did that without even submitting financial records - he was trying to pull a [US President Donald] Trump … He was trying to claim that financial documents were his personal documents, and he didn’t need to release them. He had no intention of going through a full confirmation process as secretary of state because he never intended to be secretary of state,” Garriga-López explained.

Starting in July, thousands of people rallied in the streets of San Juan urged for the eradication of the “junta,” the unelected Fiscal Oversight Management Board established by the US Congress under the watch of then-US President Barack Obama in 2016 to restructure Puerto Rico’s $72 billion debt. The board’s budget cuts have led to public school closures and a faltering healthcare system on the island.

“[Pierluisi’s] unity of purpose was not on behalf of the people of Puerto Rico. His unity of purpose was to the fulfillment of the demand that the Puerto Rican people be enslaved for the next 45 years to paying a debt that is itself unconstitutional and should be considered illegal and null and void, [to] the continuing capture of Puerto Rican public resources by Wall Street and by US financial interests, and so he had no legitimacy,” Garriga-López told Sputnik.

“He came in with a paternalistic discourse, very condescending discourse, talking about how we [Puerto Rico] need calm and stability. But underneath that calm and stability, what was happening was an incredible theft of wealth, of the tax base of public resources, of natural resources in Puerto Rico,” she said. “This was a false call to unity and a false call to calm. Pierluisi himself has made a lot of money, millions of dollars, from his contracts with the fiscal control board. His wife is also a lawyer and a lobbyist, and she has made a ton of money off the particular configuration of consulting and lawyer’s fees and lobbyist fees.”

“People have paid for this … illegal debt with their lives in Puerto Rico. That debt hasn’t been audited … The fiscal control board refuses to audit this debt, and this is a fundamental demand of the Puerto Rican people … the debt was incurred under a situation of colonial imposition, and it was speculated on Wall Street,” Garriga-López continued.

“We’re glad he’s [Pierluisi’s’] out. We’re going to get [Vázquez] out. She has no right, no legitimacy in the governor’s chair either. I hope she’s packing her bags, because she is not going to be there very long,” Garriga-López concluded.

Are Changes in Puerto Rico a Light at the End of the Tunnel or an Oncoming Train?