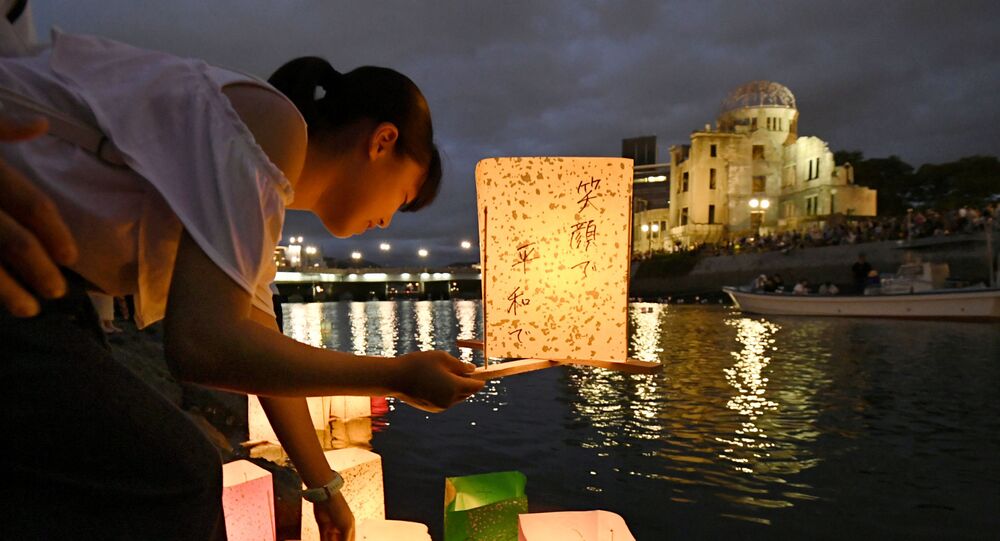 The tragic anniversary of the United States’ detonation of two nuclear weapons over Japan's Hiroshima and Nagasaki is an annual reminder of the short-sighted bombing orders and the normalization of dehumanization. Despite lessons and warnings throughout history, the reliance on and proliferation of nuclear weapons continues to trump diplomacy.

Kevin Kamps, the radioactive waste watchdog at the organization Beyond Nuclear, joined Radio Sputnik’s Loud and Clear on Wednesday to review some lesser-known tidbits of anti-nuclear history on the anniversary of the bombings of Hiroshima and Nagasaki.

Between the recent US withdrawal from the 2015 Iran nuclear deal, the Intermediate-Range Nuclear Forces (INF) Treaty, and US Secretary of Defense Mark Esper’s spitballing the idea of placing intermediate-range missiles in Asia “sooner rather than later,” Kamps told hosts Brian Becker, John Kiriakou and Sputnik news analyst and producer Nicole Roussell that the world has turned into a “nuclear-armed Wild West saloon”

In the first night of CNN’s Democratic presidential debates on July 30, moderator Jake Tapper questioned Massachusetts Senator Elizabeth Warren’s anti-nuke stance and unwillingness to launch the first nuclear weapon in the event of an international conflict.

“What’s happening right now with Donald Trump is they keep expanding the different ways that we have nuclear weapons, the different ways that they can be used, puts us all at risk,” replied Warren. “We don’t expand trust around the world by saying, ‘Y’know, we might be the first ones to use a nuclear weapon.’ That puts the entire world at risk and puts us at risk, right in the middle of this.”

There has been mainstream pushback against the US flexing its nuclear might, and Kamps noted that one good thing that has come about in recent years is the Treaty on the Prohibition of Nuclear Weapons, which was formalized in 2017 and seeks to “prohibit nuclear weapons, leading towards their total elimination.”

The treaty currently has 70 signatories and 25 state parties. A total of 50 nations must ratify the treaty for it to enter into force.

During the Tennessee-based Oak Ridge Environmental Peace Alliance’s Sunday commemoration of the Hiroshima bombing, there was a reading of a petition sent to US President Harry Truman and signed by dozens of atomic scientists that urged the US government to not go through with the bombings, lest the nation “bear the responsibility of opening the door to an era of devastation on and unimaginable scale.”

Instead, the scientists suggested US leaders compile footage of the nuclear tests and send it to Japan as a warning, so their government could have a chance to surrender and spare the lives of innocent people.

Kamps pointed out that many of the atomic scientists on the Manhattan Project were Jewish refugees from Europe and offered their knowledge to prevent Adolf Hitler from developing Germany's own nuclear bomb.

Kamps noted that more than a year before the Nazi surrender in May 1945, “an advanced scout team of the Normandy invasion got deep behind enemy lines in Germany and had conclusive proof that the German atom bomb program was abandoned. It was not happening.”

After discovering Germany had scrapped their nuclear program, Joseph Rotblat and other like-minded Manhattan Project atomic scientists requested permission to do the same with the project. Soon after, Rotblat in particular was dubbed a Russian spy in an FBI dossier. The document was eventually debunked by Rotblat’s personal evidence, but the fabrication shined a light on the desperation of the time and possible US paranoia.

“If you were to adjust for inflation,” Kamps said of the Manhattan Project’s $2 billion pricetag in the 1940s, “that’s more like 20-plus billion in today’s dollars. So Leslie Groves decided, ‘Once Congress finds out about this, we had better have a good reason for spending that kind of money.’ And the reason he gave was, ‘Well, we had to use these two bombs to end the war.’ But they didn’t - that’s the truth of the matter.”