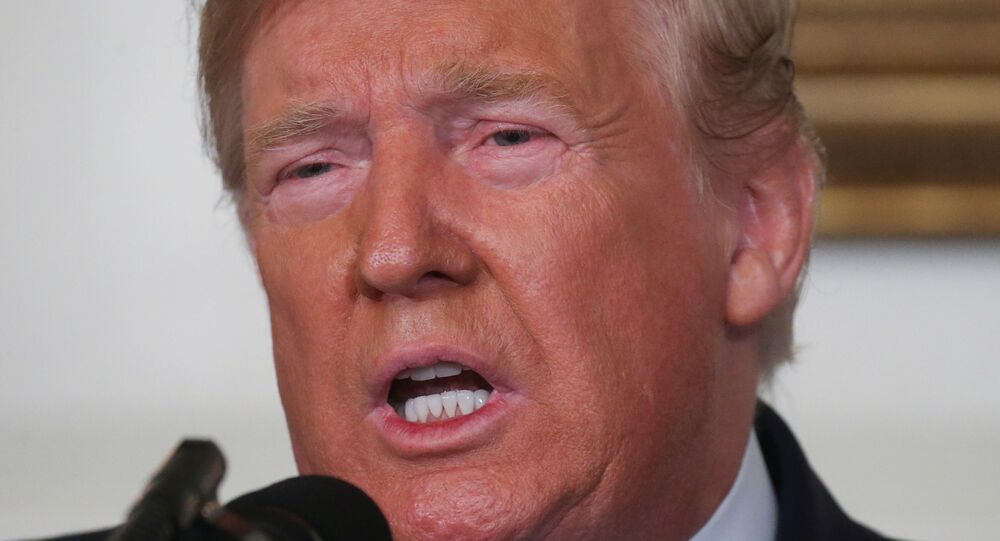 US President Donald Trump should acknowledge his role in inciting acts of violence such as the El Paso, Texas, terrorist attack Saturday through his racist rhetoric and policies, Juan Carlos Ruiz, cofounder of the New Sanctuary Movement, told Radio Sputnik’s Loud & Clear Tuesday.

A mass shooting outside a Walmart in El Paso Saturday left 22 people dead and dozens wounded in the worst anti-Latino attack in US history. The gunman, 21-year-old Patrick Crusius, who is now being charged as a domestic terrorist, is reported to have posted a manifesto online.

The document, titled “The Inconvenient Truth,” was published on the website 8chan about 20 minutes before the shooting and was replete with white supremacist langauge, adopting phrases commonly used by Trump and Fox News such as “Hispanic invasion.” The manifesto also claimed that Democrats are using “open borders” to provide “free healthcare for illegals.”

“We know that El Paso is 84% Latino, so Mexico, I can say, is in mourning,” Ruiz told hosts John Kiriakou and Brian Becker.

“[Mexico is in] mourning because it sees how its [people] are being attacked, are being targeted by the political campaign of this administration. Also, this morning, the Mexican president has basically said that Democrats and Republicans have not dealt with … the trafficking of weapons,” Ruiz explained, referring to Mexican President Andrés Manuel López Obrador’s statement Monday urging the US administration to “control the indiscriminate sale of arms.”

“So, we are dealing with the result of a political campaign by the 45th president of the US. And people in Mexico are basically saying, ‘You know, the president is racist, and he has to take responsibility.’ He is deflecting responsibility to social media, to other means of communication, but he has not himself acknowledged his direct participation,” Ruiz continued.

“People here in Mexico are saying it’s not mental health [that results in mass shootings] - it’s rhetoric and racism, and he [Trump] is utilizing this as a political platform to feed his supporters so he can be reelected. He has to acknowledge his responsibility in terms of causing a hate crime against the Mexican and Latino communities in the US.”

Trump vowed on Monday to “act with urgent resolve” and admitted that the US needs to “condemn racism, bigotry and white supremacy.” However, the president then steered the conversation to video games, the dark web and the internet as a whole, which he claims have provided a “dangerous avenue to radicalize disturbed minds and perform demented acts.”

“We can say that it [the El Paso shooting] is a direct result of the racist rhetoric that we keep listening to. I think we need to initiate a boycott of the Fox [News] channel, because that really is the one channel magnifying the voice of this president. And not only that channel, [but Trump’s] Twitter account as well. He talks about social media being responsible. He really contradicts himself,” Ruiz told Sputnik.

Ruiz called the shooting “a direct result of a political campaign that targets minorities, that targets those who are more vulnerable in our society. We need to boycott. We need to somehow cut off his microphone, his megaphones. We really need to do something about putting policies in place that really protect and uphold the dignity of every human.”

White House counselor Kellyanne Conway confirmed on Tuesday Trump’s plan to visit El Paso this week. However, the president may not be welcomed in the city left severely rattled by the mass shooting, Ruiz told Sputnik.

“This president, who helped create the hatred that made Saturday’s tragedy possible, should not come to El Paso,” former Texas Congressman Beto O’Rourke, who hails from El Paso, tweeted Monday. “We do not need more division. We need to heal. He has no place here.”

“They [officials in El Paso] are talking about crocodile tears coming out of his [Trump’s] eyes. It’s really hypocritical to have somebody come mourn the loss when that person does not acknowledge his responsibility in terms of his words, his rhetoric,” Ruiz said.