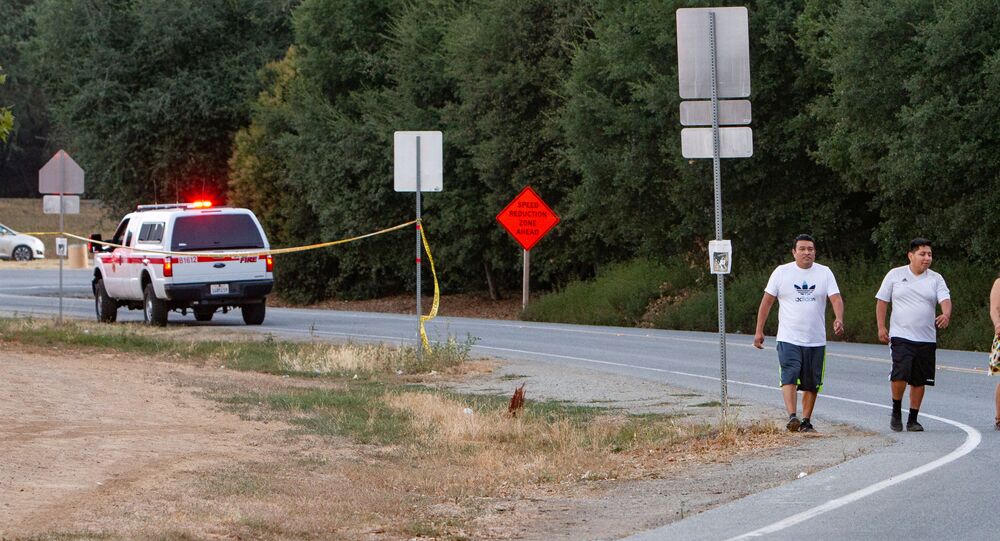 California Shooting: Stricter Gun Control Would Not Change Anything - Pundit

Three people have been killed and 15 injured after a gunman attacked a food festival in California. The gunman was shot dead by police shortly after he began firing, although police are investigating reports that a second suspect may still be at large.

President of the Crime Prevention Research Centre, Nikki Goeser, believes that stricter gun control would not have changed what happened as California already has the toughest gun control in place.

Sputnik: Three people have been killed and 15 injured after a gunman attacked a food festival in California. Firstly how significant is this most recent attack and how could it have been prevented?

Nikki Goeser: Well I think people are asking 'would more gun control has changed anything' and my own personal opinion is no. California already has incredibly strict gun control - it has some of the strictest gun control in the US and I'll just give you a few examples of that. In order to buy a gun, delivery loan or transfer of any firearm, a person has to obtain a five-year firearm safety certificate, they have to pay a fee, submit applicant data to the state and they have to pass a written psychological test by a DOJ certified instructor. The so-called assault weapons or high capacity magazines, no more than 10 rounds, they're already banned in California and California is also what's called a may-issue state. That means that you cannot get your handgun carry permit to protect yourself and your loved ones. And in that particular part of California, Santa Clara County, where the attack occurred at the Gilroy Garlic Festival - very few people are allowed to have their permits to carry and to protect themselves. I think it’s one permit issued for every 14,300 people. They have very, very strict gun control there.

Sputnik: Taking into account that this shooting happened in a strong Democrat area with strict gun laws what effect will this have on the US Presidential Race?  Would gun control have changed anything?

Nikki Goeser: I think it's definitely going to be a prevalent policy bullet point for the Democrats but I truly believe that adding more gun control walls around the nation, like those that are already in place in California, which apparently we don't know for sure, about this gunman and how he obtained the gun and maybe exactly what the gun was, I'm hearing it was a rifle, but the gun control apparently failed here. I don't believe it will change things. What I believe will change things is to allow good law-abiding citizens who obviously passed a background check and had the proper firearms training to be allowed to protect themselves and their families. I know what people feel like - it's horrific. It's awful. I have been through it myself; my husband was brutally murdered, shot six times right in front of me, by a man that was stalking me and it changes your life forever. I feel for these people because I know what this feels like. It is awful but I truly believe that good people should never ever be made vulnerable. I believe that they should be able to protect themselves.

Sputnik: Looking at how guns legislation has been implemented, regulated and controlled in the US; could we see a similar approach being adopted in the UK, where, as you know, the country is in the midst of a knife epidemic? Could self-defence laws be effective in the UK?

Nikki Goeser: Most of the mass public shootings that happened here in the United States occur in what we call gun-free zones that is where regular everyday good citizens are not allowed to protect themselves. The media fails to tell the public this, mostly we just hear there's been a horrible mass public shooting and the media does not inform the public 'Oh, by the way, everyone that was in this facility, or at this venue, or at this movie theatre at the school, what this college campus; everyone here was basically helpless - they weren't allowed to carry.’ So the gunman, who's the only person with a gun, is able to kill a large number of people and get a high body bag count.

I think to take away that incentive to be able to stop the shooter almost immediately that's very important because I think a lot of these killers do this for attention. They do this for media attention. They know that if they get a high body bag count, they're going to get that attention, and it's sick. It's disgusting. But somehow you've got to stop that - you've got to take away the incentive for them and that is by stopping them very quickly. I also believe that we need to address mental health in this country but you also have to be realistic about these things. This man was dangerous with or without a gun. Obviously, when you look at what has happened in Britain they're grappling with horrible knife killings and look at what happened in France... a man drove a truck into a huge crowd of people and killed 86 people with a truck. Evil is always going to be evil no matter what tool is used.

You can pass as many gun control laws as you want but these people will still be dangerous and deadly and it's unfortunate that we have people like this in society and I believe that we all want a safer society. Nobody wants people to be murdered. But we don't always agree on the way to best go about that and I believe that law-abiding citizens should be able to defend themselves. I don't believe disarming good people is the answer.

Views and opinions, expressed in the article are those of Nikki Goeser and do not necessarily reflect those of Sputnik.