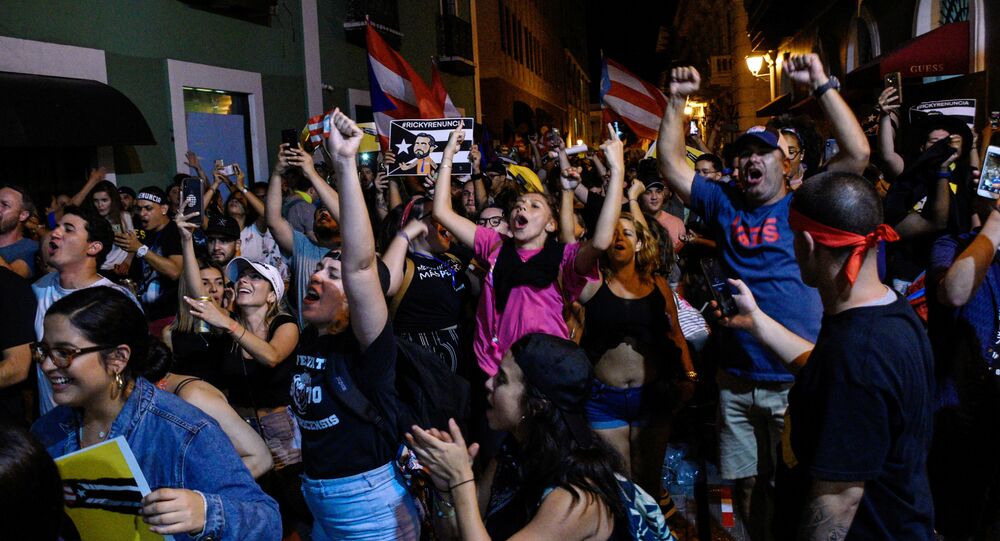 Puerto Ricans are more united than ever before, following the early-morning resignation announcement by Governor Ricardo Rosselló Thursday, and the possibility of the island, a colony of different countries for over 500 years, becoming independent is suddenly on the agenda again, experts told Sputnik.

Dr. Maritza Stanchich, a professor of English at the University of Puerto Rico, and Dr. Adriana Garriga-López, department chair and associate professor of anthropology at Kalamazoo College in Michigan, joined Sputnik to discuss how Rosselló’s resignation represents a historic consolidation of popular sovereignty on the island.

Rosselló resigned after hundreds of the governor’s messages while communicating with his associates were made public. The chats revealed hateful, homophobic and misogynistic comments against Rosselló’s opponents, journalists and even victims of Hurricane Maria. Meanwhile, the island has seen the largest demonstrations in its history this week.

“There are protests in the financial district. I understand that the main roads are paralyzed, and I believe that the activists are trying to take this to the second level. Ousting Rosselló is a clear victory, but obviously those systemic problems here are much more profound, and I think now they’re [activists] aiming their [sights] on the fiscal control board and also making sure that whoever gets appointed doesn’t continue business as usual, which has been a problem for at least 50 if not 100 years in Puerto Rico,” Stanchich, who is also an award-winning journalist and a longtime activist in the areas of human and civil rights, told Loud & Clear hosts John Kiriakou and Brian Becker.

Thousands of people rallied in the streets of San Juan this week chanting: “Ricky renuncia y llévate a la junta” or “Ricky, resign and take the board with you.” The junta refers to the unelected Fiscal Oversight Management Board established by the US Congress under the watch of then-US President Barack Obama in 2016 to restructure Puerto Rico’s $72 billion debt. The board’s budget cuts have led to public school closures and a faltering healthcare system on the island.

“We’re in a beautiful but extremely fragile and delicate moment where what we have seen is the consolidation of popular sovereignty as against the legal, political sovereignty held by the US Congress. The people of Puerto Rico have asserted our popular sovereignty and our right of self-determination, and we began by removing Rosselló, but our sights are set on the fiscal control board as well as on the other corrupt government officials. The movement is very strong. There’s a lot of ecstatic celebration. The city is alive with a sense of its own power, but also we have seen demonstrations all over the island. We really have seen a massive mobilization of Puerto Rican political power. We are aware that the world’s eyes are on us. There’s clearly a sense that we’re not done, that there’s more to come,” Garriga-López told Sputnik.

“You have to understand that throughout our 120-year history of being a US colony and 400 years of being a Spanish colony before that, there has been a sense that we are not able to stand up ... to enact self-determination. So what has been broken is that sense of impotence. That has now gone. Puerto Ricans are aware that we now have the power to transform the situation. So, how this is going to proceed, who the next target is going to be is likely … the secretary of justice, who is in line to take the governor’s chair [as outlined by the] constitution. She would be the next one in line to replace [Rosselló],” Garriga-López explained, referring to Puerto Rican Secretary of Justice Wanda Vasquez.

“The movement has clearly started to shift in the direction of starting to attack her because of her well known involvement in corruption. So, we are going piece by piece, but I know there are a lot of people also reflecting, discussing and debating what the next step should be. There’s a deep sense of victory, but also every single person that I've talked to is completely aware that there’s a lot more work to be done. This is a moment in Puerto Rican history where there is potential for massive changes to occur. This is a beautiful, democratic awakening that is happening in Puerto Rico,” Garriga-López said.

In addition to bringing hurricane victims and people of the LGBTQ and feminist movements together, one of the most striking features about the protests in the streets of Puerto Rico this week is that they have been “leaderless,” according to Garriga-López.

“The leaders have been the young people. Very young people have been at the forefront of this intersectional revolution. And those of us who are a little older have been following their lead. There hasn’t been a single person that has been the voice or the one making the calls or the one making decisions or standing in front of cameras. We haven't seen any of that protagonism, and that is anathema, completely opposed to the way everyday politics works. There hasn’t been a single political figure that has been able to crystallize in themselves or in their political proposals the energy of this movement. And in a sense, that is has been why the movement has been so successful: because there hasn’t been those divisions. We have felt what it’s like when we are all together on the same side,” she said.