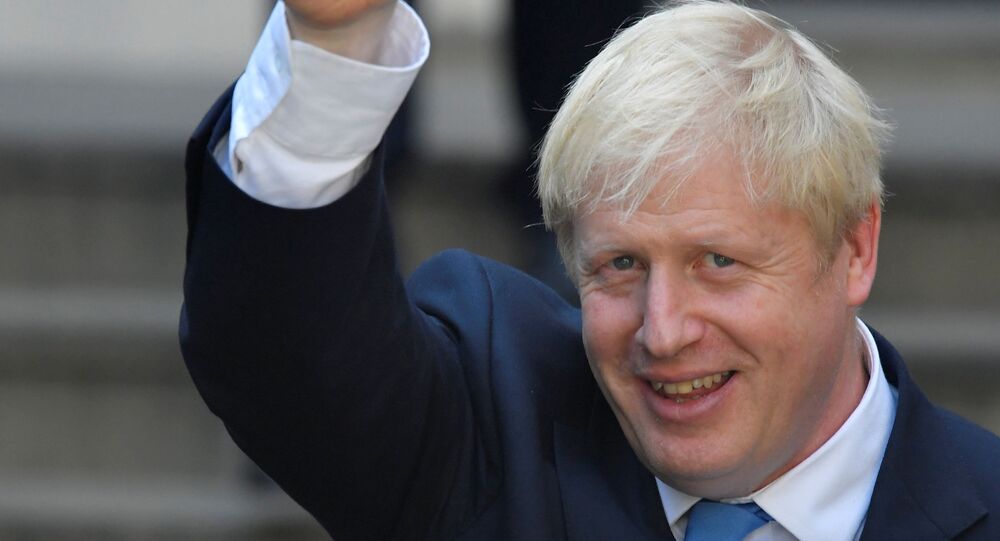 Former Foreign Secretary Boris Johnson, who resigned in July 2018 after disagreements over former-Prime Minister Theresa May's Brexit vision, has made a political comeback as the UK's new prime minister.

On 23 July, Boris Johnson became the UK prime minister after coming out on top in the Conservative leadership race, outpacing his rival, Foreign Secretary Jeremy Hunt, by a large margin.

According to John Curtice, professor of politics at the University of Strathclyde in Glasgow, the catalyst for Johnson's victory is that he was "the best known face of the leave campaign".

Dr Ben Williams, a tutor in politics and political theory at the University of Salford, believes that Tories voted for Boris Johnson "because they see in him a different kind of a leader than the Conservatives have had before and (because) they have had Theresa May for the last three years."

"And also you can argue he is the more well-known candidate, he is more recognisable, he is more known by the public, he has a higher media profile," Williams added.

Johnson, who is due to assume office on 24 July, has now just 100 days to deliver on his Brexit promise by the 31 October deadline either with or without a deal with the European Union.

According to Professor Curtice "it looks extremely unlikely" that the new prime minister will deliver on his vow, given the recent "rebellion" in the House of Commons over his candidature and the EU's stance on a hard Brexit.

Theresa May's cabinet failed to reach a compromise with British lawmakers on the UK's withdrawal from the bloc. It appears that Johnson's hardline position may be similarly challenged by pro-EU MPs and Brussels. The Financial Times claims that the new British prime minister may be even forced to call a general election to implement his vision of Brexit.

"His promise to deliver Brexit by 31 October is a bold promise, but this is the promise that most of the Conservative party want to be delivered," Williams said, suggesting that Boris Johnson’s election "does make a no-deal more likely."

"I would argue that the EU is not particularly impressed by his comments about Brexit," said Williams. "We could ultimately face a deadlock between Britain and the EU. So a no-deal now, I don’t say it looks inevitable, but I would say it looks more likely".

Nick Griffin, former Member of the European Parliament, insists that "Johnson's victory does of course give the anti-Brussels majority among mainly older, indigenous British voters renewed hope of getting the Brexit we voted for" however, "whether he can or will actually deliver this remains to be seen".,

When it comes to foreign policy, observers agree that Johnson is likely to seek further rapprochement with the US.

"Trump sees himself as Boris’s greatest and most natural ally and will almost certainly offer him a big free trade deal," said Alan Sked, emeritus professor at the Department of International History of London School of Economics, referring to Donald Trump's vow on US-UK post-Brexit trade relations voiced during his June visit to London.

According to Sked, Johnson's cooperation with Trump may help sort out the ongoing UK-Iranian crisis over the seizure of Iran's Grace 1 and Britain's Stena Impero on 4 and 19 July, respectively.

"Regarding Iran, both sides wish to de-escalate the crisis", Sked opined. "The only possible solution is for both tankers to be released under some form of fudge. After that Boris will have to decide how closely to cooperate with Trump on Iran."

​According to John Curtice, it will be interesting to see whether or not the UK PM will be able to solve the tanker crisis "given Mr. Johnson’s alleged closeness to Donald Trump," since previously the US signalled to the Europeans that they are on their own.

"That is certainly the immediate crisis that he is going to have to deal with right now and his relationship with the United States may be important in dealing with that," Curtice added.

For his part, Dr Williams casts doubt on Johnson's expertise in foreign affairs "even though he was a foreign secretary for the short period".

So, what will the new prime minister do first?

"The first steps taken by Boris will have to be to construct a new cabinet and install a new team of advisers in 10 Downing St", Alan Sked asserts.

According to him, the string of resignations among the Theresa May cabinet officials prompted by Johnson's victory "is quite meaningless".

"They are merely resigning before they get sacked," the professor said. "Boris will now appoint a new cabinet of Brexiteers who are prepared to leave without a deal. I don’t think he can afford to keep Remainers in the cabinet. He needs a united one".