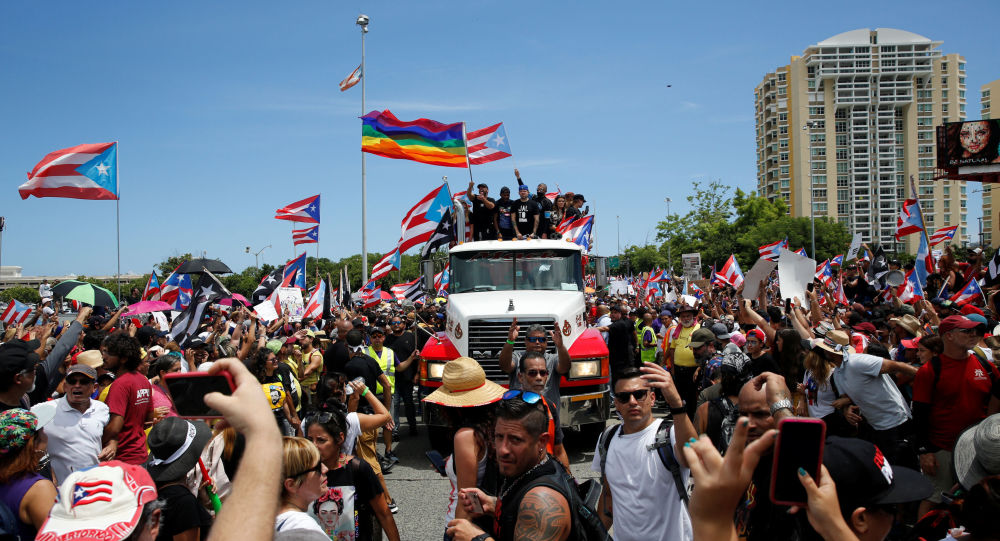 Boricuas erupted in a general strike Monday, with hundreds of thousands going out into the streets in by far the most powerful demonstration yet against Governor Ricardo Rosselló.

“I think what’s incredible is that people today, by closing down Highway 18, it’s led to the closing of the largest mall on the island as well as a lot of the economic commerce and trade. And for people that are already struggling,” Bob Schlehuber, a producer of Radio Sputnik’s By Any Means Necessary, said on the show Monday, noting that 40% of the population lives in poverty. “For people to actually put their own economic interests on the line to get Rosselló out shows how deeply they are committed to this movement.”

Protesters have sought Rosselló’s ouster for over a week, following the publishing of damning Telegram chat logs in which he and other Puerto Rican elites denigrated a host of Boricuas, from pop star Ricky Martin to San Juan Mayor Carmen Yulín Cruz and even those who died in Hurricane Maria in 2017.

BREAKING: Protesters gave an ultimatum to the Governor after his address. “You have until 11:59pm to leave. If you refuse, we will make this country unmanageable” - @ja0m26 pic.twitter.com/OOkXSIrEWS

​“You have until 11:59 pm to leave,” protesters said Sunday night, following news that Rosselló would stay in office, but not seek reelection in 2020 as he had planned. “If you refuse, we will make this country unmanageable.”

The following morning, a statement by the progressive coalition Power 4 Puerto Rico said that “the legislature of Puerto Rico must now commence an impeachment process based on the ample evidence corroborated by many jurists of Rosselló breaking the law."

Boricuas, as the saying goes, turned up. By the hundreds of thousands.

Wow. Puerto Rico.
You don’t get this perspective from the ground.
They are Loud.
Determined.
United. pic.twitter.com/3JMmbc8NY2

​Eyewitness estimates placed the crowd’s numbers at 400,000, even as a driving rainstorm struck, and in their strength they shut down key highway arteries to draw further attention to their cause. With a population of only 3.1 million, that’s a sizeable portion of the island’s people taking part in a demonstration aimed explicitly at ousting Puerto Rico’s governor.

While Puerto Rico elects its governor, it is not a US state. Seized in 1898 during the Spanish-American War, the island’s burgeoning national identity has fueled resistance movements and sometimes violent uprisings that aim to end US rule over the island, which they say is colonial in nature.

​In 2016, as the territory’s finances entered dire straits, the US Congress passed the Puerto Rico Oversight, Management, and Economic Stability Act (PROMESA), putting an appointed panel in charge of the island’s finances in order to oversee drastic cuts to social programs. The catastrophic Hurricane Maria, which killed thousands in late 2017 as both the US and Puerto Rican governments bungled the recovery effort, only inflamed tensions further - tensions that are boiling over now in an explosion of anger at what millions of Boricuas in Puerto Rico and the US mainland see as mismanagement and a deeply unfair relationship with the United States.

Schlehuber traveled to San Juan last week to report on the protests first-hand. He spoke with show hosts Eugene Puryear and Sean Blackmon Monday about what he saw and heard from locals demanding change, and they were joined by Jamarl Thomas, a political analyst and host of the "Progressive Soapbox."

“Thanks to the work by the Puerto Rican Center for Investigative Journalism, we now have learned Rosselló and his close allies were manipulating media outlets and ramping up public relations efforts after Hurricane Maria to make it look like his government was doing all they could for the Puerto Rican people, while at the same time directing government funds and private donations to their friends and those who were paying them big lobbying fees,” Schlehuber said, summarizing what protesters had told him during the demonstrations.

Thomas noted that with millions in the streets all around the world, it seemed like the question of whether or not Rosselló would be impeached was a foregone conclusion, even as Rosselló tries to defend himself by saying that using homophobic slurs is not a crime.