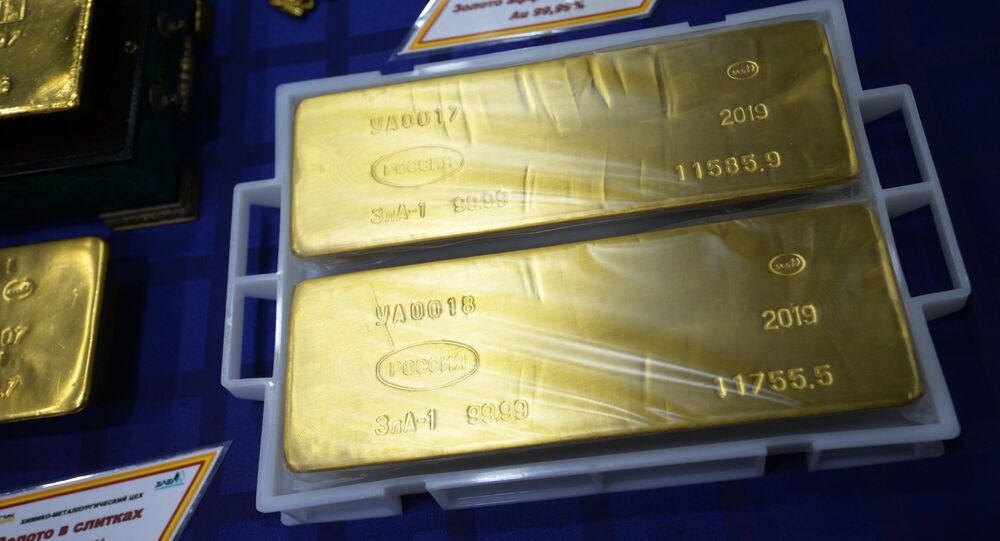 On 2 July, US Donald Trump named his economic advisor Judy Shelton as his pick for one of the Federal Reserve Board governor vacancies, prompting a great deal of anxiety among liberal economists and MSM pundits.

The president's decision to nominate Shelton was called "a new tactic in Trump’s war on the Fed" by ex-Vice Chairman of the Federal Reserve Alan S. Blinder. "He can’t fire [Chair of the Federal Reserve Jerome] Powell, so he’s sending over dreadful nominees to make the chairman’s job harder", Blinder suggested in his op-ed for The Wall Street Journal.

According to Quartz, the situation is far more appalling for liberals, as Trump and Shelton may have been planning nothing short of reinstating the gold standard nixed by Richard Nixon by unpegging the dollar from the precious metal in 1971.

Is the Gold Standard Idea in the White House's Air?

"As Judy Shelton has long been known as an advocate for sound money in general and gold in particular, Trump's decision to nominate Shelton is indicative of what could well be Trump's own enthusiasm for a managed return to the gold standard", said Adam Garrie, a geopolitical analyst and director at the think tank Eurasia Future, who believes that the idea to return to the gold standard is not so bad.

He elaborated that even if Shelton gets on the Fed board, she won't immediately change "the nature of America's addition to fiat money", adding that "even gold advocates admit that transitioning back to a full classical gold standard might take a decade".

"However, her voice on the Fed board could influence a pivot in the long term thinking of the Fed", Garrie presumed. "This would be particularly true if she becomes increasingly public in her vocal support for sound money".

Why Gold Standard is a 'Good Thing' for US Economy

The analyst believes that a return to the gold standard would be a step in the right direction, as "gold brings stability and promotes honesty from both government and the private sector".

"What's more is that it is good for the working man and the average saver", Garrie pointed out. "When one is dealing with sound money, both prices and wages stabilise over the long term. Right now, by contrast, prices are always jetting ahead of wages (in spite of government interventions) as a dollar that loses value over time forces products to be priced higher and higher in order to stay ahead of the dead man's curve of fiat money losing its value".

According to the analyst, "if one is buying and selling goods on a global free market using gold, trade deficits automatically shrink because governments cannot artificially manipulate their currencies to suit their short term trading aspirations".

Additionally, "gold would make housing bubbles largely a thing of the past", he opined, referring to the fact that the global financial crisis of 2008 was particularly caused by the burst of the housing bubble.

"When countries like the US practised sound money principles, a house was something that just about every decent working person could afford", Garrie noted. "Now, entire generations have been priced out of the housing market due to a monetary system that acts more like a giant casino than a normal economic order".

'Defenders of Fiat Money are Ready for Fight'

The very fact that Fed Chair Jerome Powell went out of his way to defame the gold standard after Shelton was nominated might mean that something is really brewing in the White House and that "the defenders of fiat money are getting ready for a fight", the analyst believes.

On 10 July, Powell warned the US Congress that returning to the gold standard would be "damaging" for the US economy.

“You’ve assigned us the job of two direct, real economy objectives: maximum employment, stable prices", the Fed chief told American lawmakers. "If you assigned us [to] stabilise the dollar price of gold, monetary policy could do that, but the other things would fluctuate, and we wouldn’t care. We wouldn’t care if unemployment went up or down. That wouldn’t be our job anymore".

According to Garrie, "Powell's remarks clearly indicate that even the idea of gold being discussed puts pressure on a fiat dollar that is effectively built on the house of cards that is debt monetisation".

"The Wall Street crowd likes fiat money for the same reason that a gambling addict likes to visit Las Vegas", the analyst highlighted. "But for everyone else, gold is the solution to multiple problems".

Gold in a Post-Fiat World