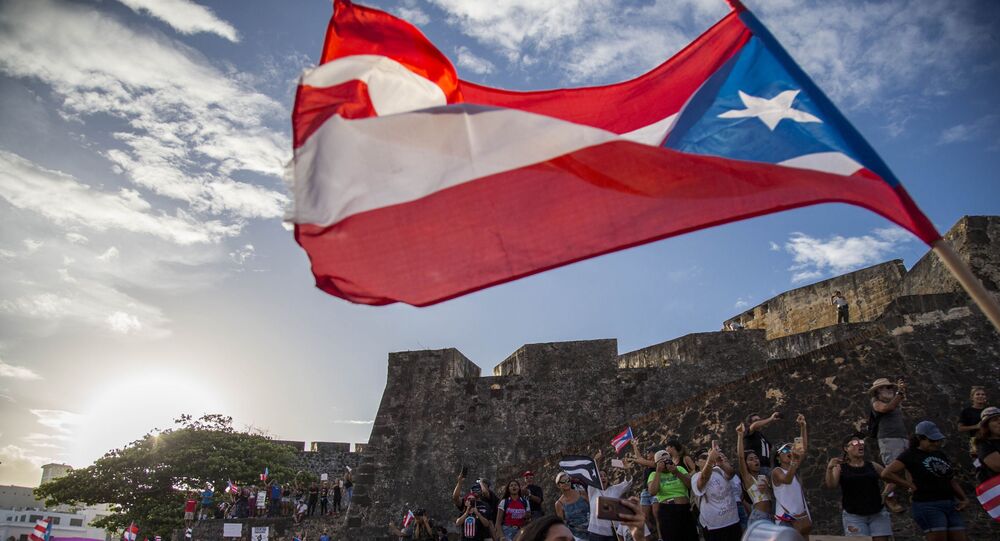 Protests in Puerto Rico have entered their sixth day, following violent clashes between demonstrators and police in the capital of San Juan on Wednesday night.

Far smaller numbers of people have turned out Thursday compared to earlier in the week, likely reserving their energies for a massive show of force on Friday. Likewise, police turned out in more standard gear to control the protests and not the gas masks and armor they brought the previous night.

A large caravan has emerged in front of the Capital building in #PuertoRico heading towards the Governors mansion #puertoricomarcha #RickyVeteYa pic.twitter.com/1Md9XTJPbV

​The protests were sparked earlier this week by the publication of a trove of personal messages sent by Ricardo A. Rosselló, governor of the US territory, and members of his inner circle in private chats. Those Telegram messages, published by Puerto Rico’s Center for Investigative Journalism, showed Rosselló and fellow officials denigrating numerous Boricuan figures, including singer Ricky Martin, in addition to former New York City Council Speaker Melissa Mark-Viverito and many others.

Tweets in which netizens used vulgar language against San Juan Mayor Carmen Yulín Cruz, who is challenging Rosselló for his office in 2020, were also shared by the governor.

However, the “chatgate” messages revealed more than an uncouth tongue: they pulled back the veil on the Rosselló administration’s attitudes about the Puerto Rican public and its problems, such as mocking victims of the September 2017 storm that struck the island.

The revelations were the straw that broke the proverbial camel’s back for an island wracked by one crisis after the next, the most dramatic of which was the catastrophic 2017 Hurricane Maria, a Category 5 storm that killed thousands on the island and so destroyed its infrastructure that nine months later, many places were still without power.

The period since has revealed the inadequacy of Rosselló’s administration, who was elected in the months before the cyclone hit. In the days after the storm, which caused a 100% power blackout on the island, Rosselló’s administration awarded Montana-based Whitefish Energy a $300 million contract to restore power. Outrage caused the government to cancel the agreement, once it became known that Whitefish had no idea how to handle disaster recovery.

In the days after the tempest, the Trump administration initially signaled it was unwilling to lower trade restrictions imposed by the 1917 Jones Act, which forces Puerto Ricans to trade with the US instead of other countries, but ultimately suspended those restrictions for 10 days amid popular pushback.

Two of the governor’s top former officials have already resigned in shame after being implicated in the chat logs, and his former education secretary and five others have been arrested on corruption charges related to the hurricane recovery effort, the Independent noted. Nearly a dozen others have been summoned to the Puerto Rican Department of Justice in connection with the leaks.

“The main focus is on Governor Rosselló resigning his office,” Bob Schlehuber, a Sputnik News analyst and producer of the Radio Sputnik show By Any Means Necessary, reported on a Facebook livestream Wednesday evening in San Juan. “I asked several people, they were also upset with [US President] Donald Trump, Wall Street bankers who have run amok on this island. They’re upset at the US government and the colonial rule.”

Schlehuber spoke with show hosts Eugene Puryear and Sean Blackmon Thursday by phone from the island as well.

The crowds chanted a slogan that arose on the streets of San Juan the first night of the demonstrations and has now become the rallying cry of the protests: “¡Somos más y no tenemos miedo!” There are more of us, and we are not afraid.

They waved Puerto Rican flags, both the traditional red and white stripes with a blue triangle, as well as a gray and white version that represents mourning. Protesters also waved rainbow flags, a specific gesture of solidarity with Martin, about whom Government Development Bank for Puerto Rico director Christian Sobrino Vega made homophobic comments in the chats and who joined the protests Wednesday.

Rosselló’s administration has also overseen thousands of layoffs, slashed public services’ budgets, closed schools and increased tuition rates, all while burdening the US territory with even greater debt.

That debt caused the creation in 2016 of the Puerto Rico Oversight, Management and Economic Stability Act (PROMESA), an unelected body chosen by the US Congress to oversee harsh austerity measures on the island. The hated body is known popularly as “la junta,” and Rosselló isn’t seen as posing a serious challenge to its dictatorial authority over Boricuan affairs.

“¡Ricky, renuncia, y llévate a la junta!” - Ricky, resign, and take the board with you - has become another popular chant at the protests.

Puerto Rico was seized by the US in 1898, during the Spanish-American War, and turned into a US territory. Nationalists and critics have accused the US of colonialism, and multiple uprisings in the 20th century sought to shake off US rule over the island. A parallel social movement has sought Puerto Rico’s admittance as a US state.

The protesters on Wednesday converged on the Capitol Building in San Juan, which houses the island’s legislature. But as their numbers swelled into the tens of thousands, so did their militancy, and the crowd soon began the mile-long march toward La Fortaleza, where Rosselló resides.

Footage shows streets packed with people chanting and singing, pressing up against concrete barriers placed by riot police. During one climactic event, fireworks were seen shooting into the streets from behind police lines.

Police storm over the barricades and into the crowd - throwing tear gas into the crowds as people tried to get away - some too overwhelmed from the gas they fall over in pain, rubbing their eyes #PuertoRico #PuertoRicoMarcha #RenunciaRicky pic.twitter.com/S1dc7Gty1Z

​While initial reports were that a lit box of fireworks had been thrown at the police, prompting them to immediately fire tear gas into the crowd in response, video shot just above the confrontation shows a small object resembling a water bottle being cast at the police, not a crate of fireworks. Observers on Twitter speculated the police may have brought the fireworks themselves to use as justification for their offensive.

​More alarmingly, Police Commissioner Henry Escalera Rivera reported Thursday that someone had broken into the police station in the southern town of Guayama the previous night and stolen 30 pistols, 18 rifles and 4,000 rounds of ammunition, leaving behind a threat against Rosselló.