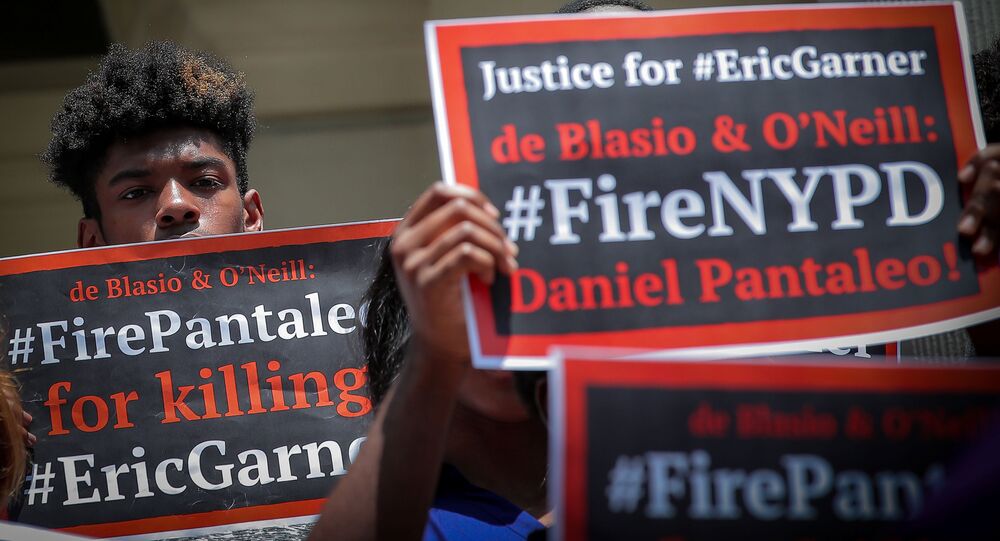 A day before the five-year anniversary of the death of Eric Garner, the US Department of Justice (DoJ) announced it would not pursue federal charges against a New York Police Department (NYPD) cop whose chokehold is said to have caused an unarmed Garner to go into cardiac arrest. Unfortunately, this delayed ruling comes as no surprise to many.

On Tuesday, US Attorney Richard P. Donoghue of the Eastern District of New York said in a press release that DoJ could not prove beyond a reasonable doubt that NYPD Officer Daniel Pantaleo acted in willful violation of the law.

The federal prosecutor also claimed Garner’s size, weight and actions in resisting arrest, coupled with the NYPD cop’s “training and experience,” played a role in the government’s decision that there was insufficient evidence to bring federal charges against Garner.

Garner, a 43-year-old husband and father of six, was spotted selling “loosies” - untaxed, single cigarettes - by NYPD officers on Staten Island on July 17, 2014. Within minutes of the encounter, Garner was brought down by cops, and Pantaleo placed the unarmed civilian in a chokehold that has been banned by the NYPD since 1993. Garner lost consciousness and was pronounced dead at a hospital shortly afterward.

The altercation, which was caught on video, spurred the notorious plea “I can’t breathe,” which was uttered 11 times by Garner and became a rallying cry for organizations protesting racial inequality, such as the Black Lives Matter movement.

Kofi Ademola, an activist and organizer with the Black Lives Matter movement, and Joel Northam, an activist with the Justice Center en El Barrio, joined Radio Sputnik’s Loud and Clear on Tuesday to discuss the DoJ’s announcement and how this particular ruling measures up to other federal cases that have recently come across the desks of US attorneys.

“This is another situation where the federal government is refusing to hold police accountable,” Ademola told hosts Brian Becker and John Kiriakou.

“We will not find justice in these courts. Period. Hands down. There is no real institutional legitimacy beyond just like the violence that the state exercises against brown and black people in this country,” Northam explained, pointing out that it took federal prosecutors 1,825 days to investigate a murder that was captured on camera.

“Crime is manufactured. Poverty is manufactured. Whenever you have an unequal, unjust system in society, you need an enforcement. This isn’t just on the police level; we’ve seen people go through military trials recently that have committed heinous crimes overseas, and they’re not being held accountable,” Ademola noted, perhaps referring to Special Operations Chief Edward Gallagher, who was recently acquitted of the murder of a wounded Daesh militant and the attempted murder of two unarmed civilians in Iraq.

“They’re able to kill people, call them insurgents, call them terrorists, et cetera, and get away with that murder in the name of this country,” the BLM organizer asserted.

Northam built on Ademola’s statement by bringing up the fact that the DoJ head, Attorney General William Barr, has a legal history that speaks for itself, considering how he supported then-US President George H.W. Bush pardoning Caspar Weinberger, who served as defense secretary under Ronald Reagan, in 1992 after he was indicted on multiple felony charges relating to the Iran-Contra affair.

“This is part of a historical continuum,” Northam explained. “It’s not surprising that this cop, Daniel Pantaleo, gets to walk free; meanwhile, in New York City, right now, there is a judge who’s thinking about allowing bail for a billionaire child sex trafficker who has a private plane and a fake passport.”

The alleged child sex trafficker described by Northam is none other than Jeffrey Epstein, who is currently awaiting US District Judge Richard Berman’s bail decision, which is slated for a Thursday announcement.

“Whether it’s local through police or abroad through military, this country will justify those murders in order to have an apparatus in place in order to suppress us,” Ademola told the hosts.