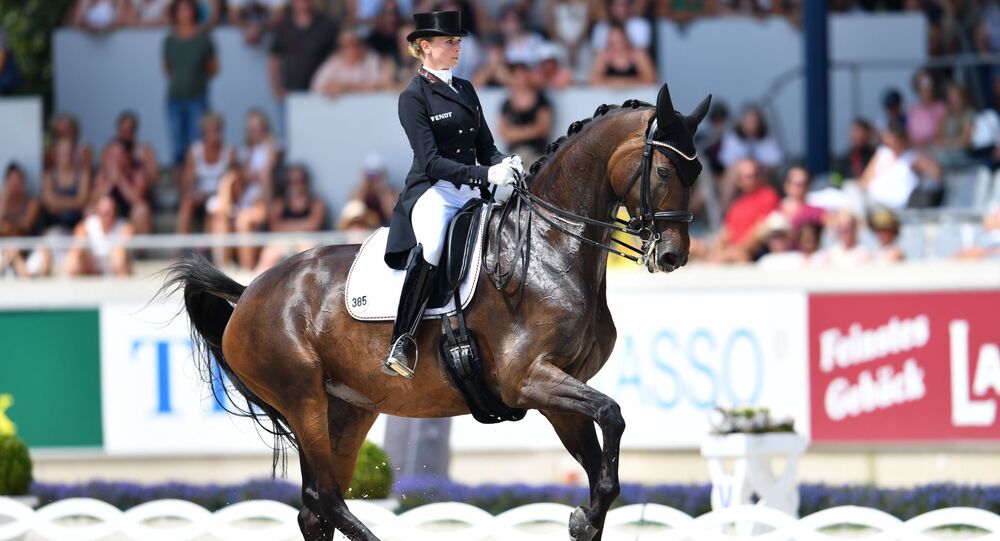 On 11 July, Reiter Revue International, a German monthly for equestrian sports, reported that special "information stewards" to liaise with the public would be deployed at CHIO Aachen 2019, Germany's largest international horse festival that takes place between 12 and 21 July, citing a 2018 scandal over "bad riding" covered by West German Broadcasting Cologne (WDR) last year.

In October 2018, the WDR programme Quarks raised concerns over poor horse protection at the country's biggest equestrian tournament. The Quarks editorial team conducted an investigation following the firestorm on Facebook, depicting horses in too tight head and neck posture with their mouths open.

The inquiry indicated that 25 out of 28 horses seen on the recordings were ridden in too close a head and neck posture. The horse experts approached by the broadcaster confirmed that this style of riding commonly known as "Rollkur" causes pain to horses and in the long run can be harmful to their health, bemoaning the lack of supervision at Germany's biggest annual equestrian event.

The Olympic equestrian dressage competitions have their own dark side with prizes and medals won at the expense of horses' health and life expectancy, say longtime horse trainers Hector Carmona Jr and Carel Eijkenaar.

"Rollkur and LDR provide a rider with an extreme domination over the horse where its neck and head is hauled in with chin on chest and or shoulders while 'training'", explained Carmona, a trainer and clinician, while describing one of the most controversial horse riding techniques called "Rollkur" and LDR ("Long, Deep, and Round").

He stressed that "the horse cannot literally see where he is going and becomes under complete domination of the rider instead of the 'happy athlete through harmonious education' as stated in the International Federation for Equestrian Sports' (FEI) Rule Book".

Carmona highlighted that electrocardiography, as well as endoscopic, skeletal, and behavioral research has shown the physical and psychological damage done to horses subjected to Rollkur-like techniques. According to him, this style of dressage may lead to continuous injuries, premature retirement, and in many cases to the animal’s death.

The equestrian sport is a lucrative business. According to the European Horse Network, the total impact of the horse industry on the European economy amounts to about 100 billion euros a year bringing in at least 5 billion euros in taxes into EU states' coffers annually.

According to Carmona, those involved in the horse industry make major profits through sales and breeding which makes competing "essential for the marketability".

Tough training methods, including Rollkur or LDR, are used to gain immediate results and quick submission of an animal instead of spending a lot of time and effort to build trust and harmonious connection between a rider and a horse, Carmona elaborated.

Rollkur and LDR advocates argue that horses routinely trained in "hyperflexion" do not experience acute stress and that getting better submission of an animal cannot be condemned as this is a centerpiece of dressage. They insist that many horses strained using hyperflexion successfully compete and win medals in Olympic Games.

Olympic medals, however, come at a price for a horse, Carmona said.

​"Young talented horses have a very rigorous training and showing schedule to maintain in order to qualify for regional then national championships which in turn qualify them for the World Young Horse Championships and out of consequence the majority of the horses are never heard from again", he noted, specifying that due to the exhaustive training the life expectancy of a dressage horse could be reduced to eight years.

He believes that the actual shift occurred when Sjef Janssen, a Dutch national Olympic team dressage coach, dubbed "one of the most controversial figures who set about revolutionising the sport" by The Horse Magazine, joined the FEI Dressage Commission in 2003.

"He entered the FEI Dressage Commission to make decisions around what can and what cannot be accepted in his way of thinking in the modern dressage", Eijkenaar noted, adding that prior to that Janssen served as the president of the International Dressage Trainers Club (IDTC) between 2001 and 2002.

Janssen is known as a proponent of the LDR (Long, Deep, and Round) technique that according to the trainers does not differ much from Rollkur, which was banned by the FEI in February 2010. Both techniques put pressure the neck of the horse in a very deep bending manner. However, while Rollkur has been prohibited, "the technique known as Long, Deep and Round (LDR), which achieves flexion without undue force" has been recognised as "acceptable" by the FEI.

Rolkur or not? #dressage pic.twitter.com/VnIppwANIO

​EU Animal Rights Groups Should Team Up to Fight Rollkur/LDR

On 22 June 2019, The Hill reported that American animal rights activists are pushing Congress to adopt The Prevent All Soring Tactics Act (H.R. 693), aimed at stopping “soring”, or techniques that involve "intentionally inflicting pain on a horse’s hooves and front limbs to produce an exaggerated high-stepping gait known as the Big Lick" at US dressage tournaments.

Praising American equine groups for the initiative, Eijkenaar and Carmona suggested that European veterinarians and animal rights groups may follow their US counterparts and exert pressure on European lawmakers to nix both LDR and Rollkur. European activists, however, need to be brought together first, the trainers opined.

"There are many groups in the world and they all talk about taking care of the health of horses and specifically against Rollkur", Eijkenaar said, bemoaning the fact that there is no unity among these activists. "People can only put things forward when all come together", he stressed.

Hector Carmona Jr is a horse trainer and clinician who was a member of the International Federation for Equestrian Sports (FEI) up until the mid-1990s as a competitor. Carmona was born in 1957 in Chile. He is known for training high-score gaining horses Santana, Lillen, Jasmine and others in the US. In Europe Carmona has been retraining Rollkur/LDR horses for students over the last several years. He is a son of Major Hector Carmona (1925-1987), a retired Chilean cavalry officer, who founded the Los Alamos Dressage Centre in the US in 1966 and took part in the South American and Pan American Games, and the Olympic Games. Major Carmona coached the United States Equestrian Team dressage riders and trained five Grand Prix horses.

Carel Eijkenaar is a FEI Dressage Trainer & Instructor FNRS and FEI international dressage judge. He was born in The Netherlands in 1946, and was in charge of running the stables of the Dutch Cavalierly between 1966 and 1968. Eijkenaar owned and managed the Riding School and Dressage Training Centre ‘Osterbeeks Ruiter Centrum’ in The Netherlands between 1976 and 1990. In 1996, Carel became a member of the International Dressage Trainers Club. He works as a freelance dressage trainer in Israel (since 1990); Cyprus (since 1994); Greece (since 1995). Eijkenaar is Member of Honor of the Israeli Equestrian Federation (IEF) since 1985. He has been working as coach and trainer for upper level riders including Grand Prix since 2006 in the United States.