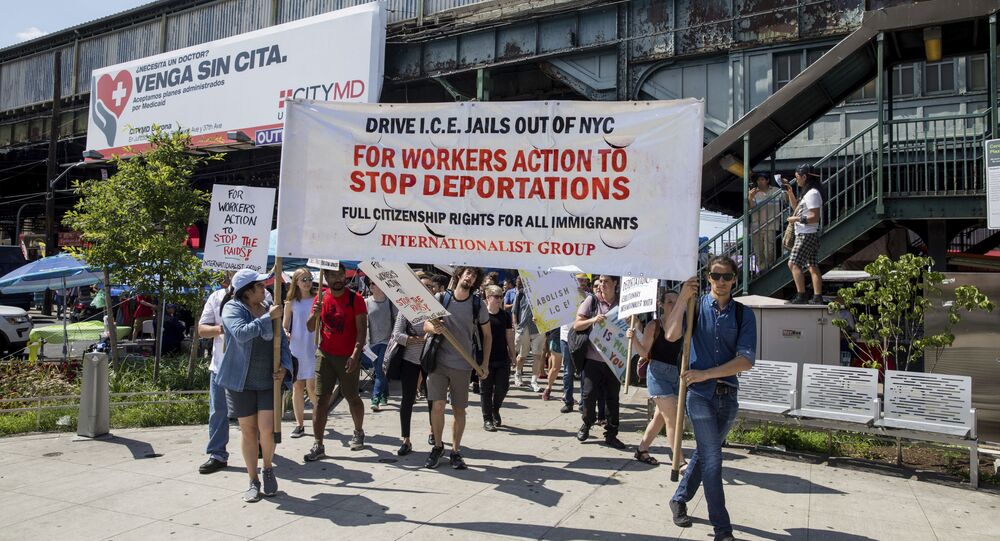 While communities in cities across the US came together to make sure “nobody opened the doors” for US Immigration and Customs Enforcement (ICE) agents over the weekend, the continued threat of such raids serves to instill fear in immigrant communities as well as among would-be migrants.

Anti-immigrant raids planned by ICE over the weekend largely failed to materialize, but still spread fear in immigrant communities across the country. Meanwhile, the Trump administration rolled out a new, hardline policy making it more difficult to apply for asylum.

“I think one of the things that’s important to note is that it’s not [like] these kind of arrests and detentions were not happening before,” Barón told hosts John Kiriakou and Brian Becker.

“There has been very heavy-handed enforcement and separation of families when people get arrested, and so I think that’s going to continue. We anticipate that, and we need to monitor that regardless of what the administration is saying. I think what we were anticipating and fearing [over the weekend] was this dramatic escalation of arrests and particularly the arrest of whole families. And so far, in some ways, the fact that there has been so much attention on this has potentially helped get the word out to people about ‘know your rights’ information. A lot of good work has been done on that front, and we’ve also seen examples of immigration agents try to go to someone's house and [the people being targeted not opening the door],”  Barón told Sputnik.

According to a report by the New York Times last week, ICE agents were expected to arrest thousands of migrants in 10 major US cities including Los Angeles, San Francisco, New York, Chicago, Miami, Denver, Atlanta, Baltimore and Houston, beginning last weekend. The operation was expected to last several days.

However, despite the fact that immigrant rights advocates say there are few signs that the ICE raids have materialized, Trump insisted Monday that the raids over the weekend were successful without revealing any information about the number of arrests that occurred.

"People came into our country illegally," Trump said at the White House Monday. "Many were felons. Many were convicted of crimes. Many, many were taken out on Sunday. You just didn't know about it."

According to Ruiz, there haven’t been many signs that the ICE raids occurred in his community, either.

“I am calling from the heart of Sunset Park in Brooklyn [New York]. They came in twice into this community. Nobody opened the doors for them. And basically they went away empty handed. I have to say that this is a frontal attack and a continuation of a system that has been in place for quite a while. So, we need to emphasize that. They are vile, they are violent, and they are abusive. It is part of this political platform by the president. I think he wants to please his supporters,” Ruiz said. “This is, I think, solely [for] the purpose of sowing fear in our communities, terrorizing our immigrant brothers and sisters in the nation.”

Barón agreed, also noting that the ICE raids are just a continuation of Trump’s anti-immigrant policies.

“I think it’s a continuation. This has just been the pattern and practice of the administration, and not only the actual actions … which is having a dramatic impact on communities, but fear is part of their tactics. There’s this pattern of creating fear and terror in the community, and their idea is that somehow this is going to deter people from coming to the US, people who are seeking protection. This morning we heard about this new proposal to try to restrict people from seeking asylum, even though the courts have shut down very similar proposals in the last few months. It’s just a continued pattern. The administration is just [hell bent] on trying to make sure people are not allowed to seek protection here,” Barón explained.

On Monday, the Trump administration introduced a new rule which requires asylum-seeking immigrants who enter the US through the southern land border to apply for refugee status in the country “through which they transited.” The interim file rule will take effect on Tuesday, after it is published in the Federal Register, the US Departments of Justice and Homeland Security confirmed.

“The Department of Justice and the Department of Homeland Security are adopting an interim final rule governing asylum claims in the context of aliens who enter or attempt to enter the United States across the southern land border after failing to apply for protection from persecution or torture while in a third country through which they transited en route to the United States,” the rule states.

"This new rule is patently unlawful, and we will sue swiftly," Lee Gelernt, deputy director of the American Civil Liberties Union’s (ACLU) Immigrants' Rights Project, said in a statement Monday.

“We do have to understand that there is this phenomenon of criminalizing the refugee and asylum seeker that is in full effect nowadays. So it’s being played out as we speak … Unfortunately, this political climate creates a lot of confusion and fear,” Ruiz said, referring to “mispresented” claims by Kenneth Thomas Cuccinelli II, acting director of the Citizenship and Immigration Services office, that the immigrants being targeted in the raids have immigration removal orders.

“You can look at their records … of lawyers. It basically tells you that 99% of those [immigrants] who are in court proceedings continue to go to their court, and they submit to the process,” Ruiz explained.

According to Barón, the separation of immigrant families is still occurring.

“The separation of families is happening and continues to happen in multiple ways. When we have these arrests by ICE in the community, we have longtime residents who have been here, who have families who get pulled away and arrested every single day. The raids have been happening. What the president is talking about, is increasing [the raids] … They are still separating children from parents on very flimsy grounds, on the fact that maybe the person [parent] had a criminal conviction long ago or because there is some suspicious, vague suspicion of the person being involved in a gang, which is totally bogus,” Barón explained.