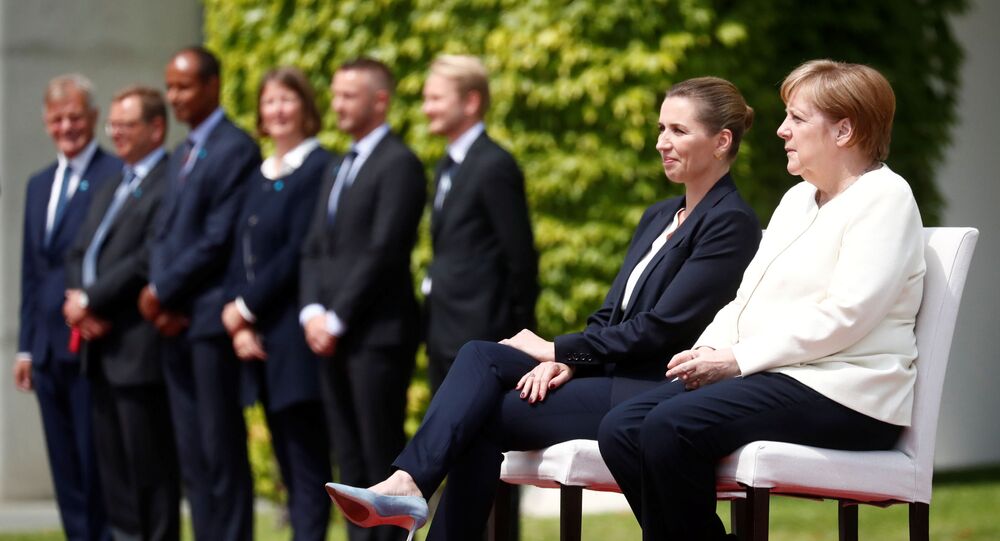 BRUSSELS (Sputnik) - German Chancellor Angela Merkel has had three bouts of shivering in a month, triggering a frenzy of speculation about her health.

Merkel, who turns 65 on Wednesday, leads the world's fourth-largest economy, so the tremors have made headlines beyond Germany. The chancellor has been at the helm of the German government since 2005. She has already announced that this term, ending in 2021, will be her last. Should she leave the job earlier than expected, the implications could be felt across the European Union and possibly globally.

The first episode in mid-June, when she could be seen shivering next to Ukrainian President Volodymyr Zelenskyy, was explained by her team as dehydration on a hot day. However, about a week later she was filmed shaking at a meeting with German President Frank-Walter Steinmeier.

Last week, Merkel suffered a new bout of tremors at a meeting with Finnish Prime Minister Antti Rinne in Berlin. Shortly afterwards, the German chancellor and Danish Prime Minister Mette Frederiksen sat down for national anthems although the protocol would usually require them to be standing. Media reports suggested that Merkel was the one to have asked for a change.

The chancellor's office and Merkel herself assured journalists and public that she was fine, but did not provide any further details on what caused the shivering. Merkel suggested only that the reason for tremors may have been psychological.

Merkel's shivering episodes gave rise to the debate on whether state leaders owe it to the people to disclose details about their health. In the United States, for instance, there is an almost century-old convention under which presidents and candidates for the top office do an annual physical exam and make a physician statement public.

Almost 60 percent of Germans, however, consider that Merkel's health is her private matter, with 33.8 percent in contrast suggesting that the chancellor's condition should be made public, a poll by Civey pollster showed on Saturday.

Jean-Frederic Poisson, the French Christian Democratic Party leader, who also sought a nomination in the 2016 presidential race, in turn, believes that it is vital to make sure that a leader of a great nation "is in full control of his/her intellectual faculties when negotiating or simply managing the country."

"The Americans give every year or even more often, details by an independent physician, of the health bulletin of the president. Not many other countries do it. It is not systematic in Russia, China or Japan for example," Poisson said.

Referring to the experience of France, he cited the "bad example" of Francois Mitterrand, who had been demanding as the leader of the Socialist opposition in 1973-1974 that then-President Georges Pompidou step down over cancer that the latter was hiding to the French but who had been seeking to keep in secret his prostate cancer when he took the top office.

"Mitterrand’s cancer was diagnosed in 1981 but it was hidden to the French until the terminal phase in 1992. That is a very bad example because, at the end of his tenure, President Mitterrand was very diminished. He could not be the president of France anymore. In my view, Mrs Merkel cannot continue to feed rumours by her refusal to say what she suffers from. She must give a clear medical explanation to her fellow citizens," Poisson concluded.

The Reason Could be Indeed ‘Very Benign’

As German and world press have been buzzing with questions and looking for a possible diagnosis, Sputnik consulted a specialist in neurological diseases, Dr. A. Letroye, in Brussels, who agreed that the shaking bouts were likely to have been caused by stress and busy schedule.

"The reason for her shaking could be very benign and linked to her heavy work schedule under permanent stress. I really don’t think Parkinson [disease] is involved. Parkinson’s tremor is continuous and has other neurological symptoms, such as difficulties to walk. Mrs Merkel walks straight and fast when leaving the stage, visibly without any problem," Letroye said.

The doctor noted that such bouts were usually triggered by either sudden high fever due to an infection or sudden drops in blood pressure, or essential tremor.

The main opposition political parties in Germany have been rather subdued about Merkel’s trembling, mainly choosing not to invade her privacy.

While noting that Merkel is a "shy person who does not like to speak about herself" and seems to prefer avoiding the perspective of having to abandon her position earlier than expected, Pierre Vercauteren, a political sciences professor at UCLouvain University in Belgium, insists that she still had better have an independent physical exam to dispel rumours.

"The other facet is the need in a democratic society to know if the leader is still capable of carrying out his/her functions. Transparency is expected at that level. To take extreme examples, a nation such as Germany could not keep a person suffering from Alzheimer at its helm, or somebody suffering from heavy neurological disorders or epilepsy crises. It would be good if an independent physician, designated by the Bundestag, for the balance of powers, examined her, and declared, even keeping most elements about her health private, that she can carry out her functions without any problem. That would clear the air and stop the wild rumours," Vercauteren said.

Merkel’s bouts of shivering indeed come as the German chancellor has been under great pressure. Her favourite, Annegret Kramp-Karrenbauer, was rubber-stamped by the party as leader of the ruling Christian Democratic Union (CDU) but does not seem to be popular with the Germans as Merkel has been in her four terms as chancellor. Hence, Merkel appears to be reluctant to step down earlier than planned and thereby possibly trigger snap elections.

Concurrently, the German coalition government has been at odds over the Social Democrats’ refusal to support the nomination of Defense Minister Ursula von der Leyen to lead the European Commission. On top of this, it is still unclear whether the nomination of the CDU’s der Leyen will ultimately be approved by the European Parliament in a Tuesday vote.

One thing is certain: the media are merciless, with no weakness going unnoticed.