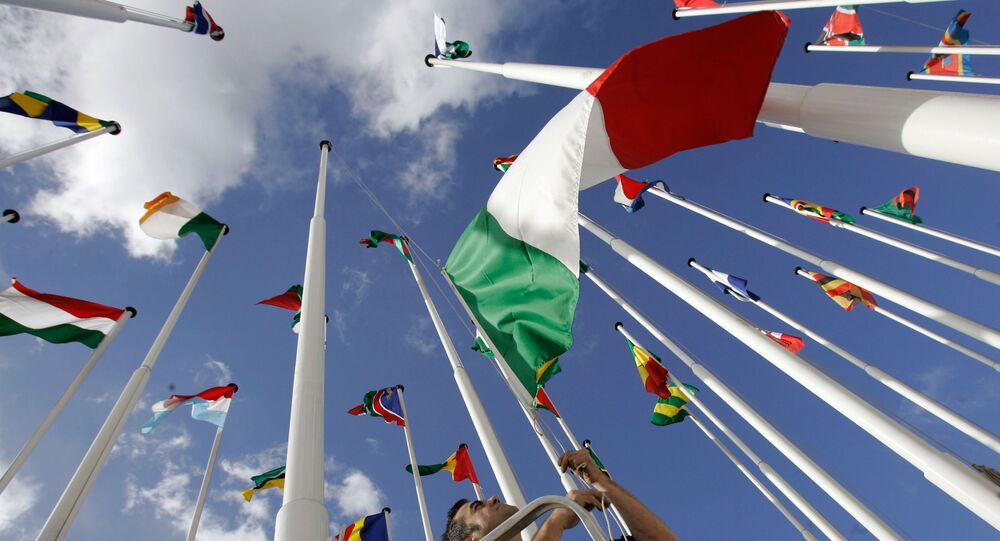 Rome has managed to escape EU sanctions over massive public debt, with the decision by the European Commission coming after PM Giuseppe Conte said Italy's public deficit is "perfectly on track" to reach 2.04 percent of gross domestic product in 2019. German economist Marc Friedrich has spoken about Italy's prospects in the Eurozone.

Sputnik: Mr Friedrich, how after long-lasting intimations and warnings, in your opinion, has Italy managed to convince Europe and escape heavy sanctions over massive public debt? Why has Brussels backed down? Do you have your personal explanation?

Marc Friedrich: The problem is that Italy has big leverage. Italy can blackmail the European Union and Brussels because they know the fate of the EU and the Euro depends on Italy. It is the third largest economy in Europe and if it steps out of the European Union Monetary system, the euro and the whole system would collapse. That’s why Brussels does not want to escalate the whole situation. Italy is a very important country for the euro and for the European Union in general. Despite all the problems, the EU has not started disciplinary action against Italy and Italy just gained more time.

Sputnik: Italy is said to have promised to push its deficit down to 2.04 percent by cutting its 2019 budget deficit by €7.6 billion, or 0.42 percent of gross domestic product. Rome has also vowed to stick to EU finance rules in 2020. How is Italy, whose economy is now in a technical recession, going to solve this puzzle?

Marc Friedrich: Its shenanigans. The Italian government has a lot of tricks. For example, they froze the promise to pay a basic income for the citizens and also the pension reform. But they will need to do it in the future in any case. In addition, I would like to mention the one-time back payment from the luxury company Gucci of over 1 billion euros. This amount represents one of the biggest tax settlements ever by a company in Italy. All these factors together brought them down to 2.04 percent. But it won’t happen next year that Gucci pays another billion and Brussels knows that.

Sputnik: Italian debt now stands at 132 percent, and is the second largest in the eurozone after Greece. The Commission forecasts this figure will rise further to 135 percent next year. How should we read this data? Does that mean that disciplinary action against Italy is still possible? Does Italy have a chance of becoming the second Greece?

Marc Friedrich: Definitely! To be honest, I love Italy but Italy is bankrupt and is already in a recession like you said. Within the eurozone, within the euro and with the low-interest rate, Italy will never recover. Mark my words! It’s going to get worse and worse. We already have a very high unemployment rate, especially young people under 25 years old (over 30 percent), 165,000 young people have already left the country to find a future in a new place. This is a horrible sign for the economy because they won’t pay any taxes and pension contributions, they won't make their contribution to the rebuilding of the economy. I have to admit, that Italy is bankrupt and within the EU they will never, never, never recover! Italy needs its own currency.

Sputnik: Speaking to Bloomberg at the G20 Summit Dutch leader Mark Rutte has claimed that Italy’s debt crisis risks causing a rupture within the eurozone, warning that there has been a breakdown in trust between the member states. Do you agree with this vision?

Marc Friedrich: Yes, I do agree with Rutte. I’m just wondering, why the EU approves certain laws if it never uses them. The first two countries who broke the Maastricht criteria were Germany and France. This is actually a bad example, but the other countries joined and followed them. This is just more proof that the European Union is not working. Twenty-eight countries under one law, it’s not going to work. We still have different taxes all over the union, we have tax paradises in Ireland, in the Netherlands where Mr Mark Rutte governs. It’s not going to work because every country has its own agenda and we will see it pretty soon.

Marc Friedrich: Italian politicians realise that the country has no chance of survival within the euro and with the euro, that’s why they're looking for alternatives. Many companies are already looking forward to the introduction of minibots. Minibots is smart way for the soft exit of Italy out of the eurozone which will happen anyway, sooner or later. So, in my opinion, the alternative currency is a first step to abandoning the euro, something which only made the Italian people suffer.

Sputnik: You said that Italy would leave the EU sooner or later. Do have any concrete previsions regarding Italexit?

Marc Friedrich: Obviously I can’t give you any concrete date. It’s impossible. However, I think as long as Italy will have the leverage and will blackmail the European Union, they will use it. But maybe at one point in the future then the debt will be too high and the people will unemployed and will feel the recession, which is coming pretty soon, all these factors would escalate the situation. I guess the euro is not going to survive the next four years, by 2023. And we already see the recession on the horizon and we see that the banks have a very serious problem. Perhaps before that Italian politicians will decide to get out of the euro, like the UK did.

The views and opinions expressed in this article are solely those of the expert and do not necessarily reflect Sputnik's position.