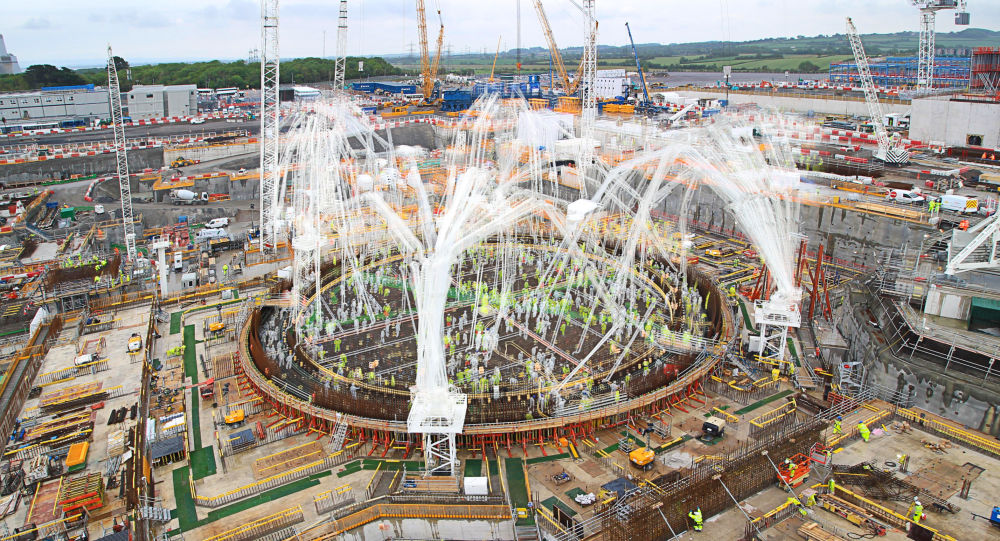 Burgeoning supplies of renewables like solar and wind have pushed the price of energy in the UK down to 0.04 pence per megawatt hour. UK energy expert Victor Collins spoke about the consequences of such low energy prices.

Construction is surging ahead at Hinkley Point C, Britain’s newest nuclear power station, which is due to come online in 2025 and has been estimated to provide seven percent of the UK’s energy needs for the next 60 years.

Nuclear Minister, Andrew Stephenson visited the site in Somerset last week, when the concrete base of the first reactor was completed, and said: “This is a huge achievement for Hinkley Point C and a major milestone for the UK’s nuclear new-build industry, which as a low-carbon electricity source is key to meeting our ambitious target of net zero emissions by 2050.”

The best view of #Hinkley Point C? How about from over 70m up, at the top of the world’s strongest crane in its class!#BuiltByUs pic.twitter.com/L83mbB2NhR

​The project is being built by the French company EDF Energy, with financial backing from the Chinese government.

The construction of the £18 billion Hinkley Point C was given the go ahead in September 2016 by Prime Minister Theresa May and her Cabinet - which included the then Foreign Secretary Boris Johnson.

Mr Johnson is now the strong favourite to defeat his rival, Jeremy Hunt, and win the race to be the next leader of the Conservative Party and Prime Minister.

If Mr Johnson is elected as the new leader of the Conservative Party on 23 July and becomes Prime Minister he could conceivably cancel Hinkley Point C as well as another unpopular and expensive “white elephant”, the HS2 high speed railway.

Supporters of renewable energy have criticised the Hinkley Point C deal because of the “strike price”, which guarantees EDF Energy £92.50 per megawatt hour for 35 years, which is much higher than current UK energy prices, which have rarely gone above £67 per megawatt hour.

Victor Collins, a UK energy expert, said: “It is the most expensively procured object in the history of mankind. They inflation-linked it to that price for 35 years when the energy price is actually collapsing. It’s like when Gordon Brown sold the UK’s gold when it was at an all-time low.”

When the deal with EDF was announced in 2016 the Labour Party criticised it as a rip-off. Ten months later EDF said the project would cost an extra £1.5 billion.

In 2017 Labour Party leader Jeremy Corbyn said he would not rule out a Labour government pulling the plug on Hinkley Point C unless it was "already built and in operation."

Cancelling Hinkley Point C would inevitably lead to an expensive lawsuit from EDF and their Chinese backers, but some have argued it could still be worth it in the long term.

Hinkley Point C under development. Pass this major construction site everyday and can’t help but wonder what Anglesey is missing out on. Local economy is booming with the 4000 workers on site. Wylfa B needs to happen for our own economy and for the future of the island. pic.twitter.com/3SWaInqy4D

​Mr Johnson has already proved, with his recent remarks about Huawei, that he is not afraid of upsetting Beijing.

Mr Collins said: “It’s never too late to stop Hinkley. It’s a question of balancing the cost of the damages they would have to pay out, compared with the cost of the subsidy, which could be £10 billion compared to £100 billion.”

Mr Collins added: "The delivery date of 2025 is highly unlikely based on previous track record at Flamenville in France and Olkiluoto in Finland. These delays were public knowledge during the time of award of Hinkley Point C and the flaw in the reactor design is well publicised, even leading to the resignation of the EDF CFO (Thomas Piquemal) and opposition by French unions against the Hinkley C deal."

Right here's the plan. #RevokeArticle50, call a General Election, stick it to HS2 and Hinkley Point C, scrap the new coal mine, sort out the climate crisis and then we all go to the Winchester and have a pint.

​He said the production of renewable energy, especially solar and wind, in the UK was booming.

Analysis from Ofgem last year showed how profitable renewable projects were compared with nuclear and conventional fuels like gas and oil.

Mr Collins said: “The whole paradigm of demand is changing due to self-generation which is removing demand from the grid. Solar in the daytime is reversing the energy price.”

Fossil fuels are rapidly going out of fashion in Europe and are being replaced surprisingly quickly by renewables.

In May it was reported that Britain had not used any coal to generate electricity for two weeks - the longest period since the 1880s.

​Fintan Slye, director of the National Grid Electricity System Operator, said May had also broken the record for solar power in Britain.

Mr Slye said: “As more and more renewables come onto the system, we're seeing things progress at an astonishing rate."

Currently there is still a need for some coal to be used during the winter months but the UK government plans to phase out the UK's last coal-fired power stations by 2025 to reduce carbon emissions.

The views and opinions expressed by Victor Collins are solely those of the expert and do not necessarily reflect Sputnik's position.