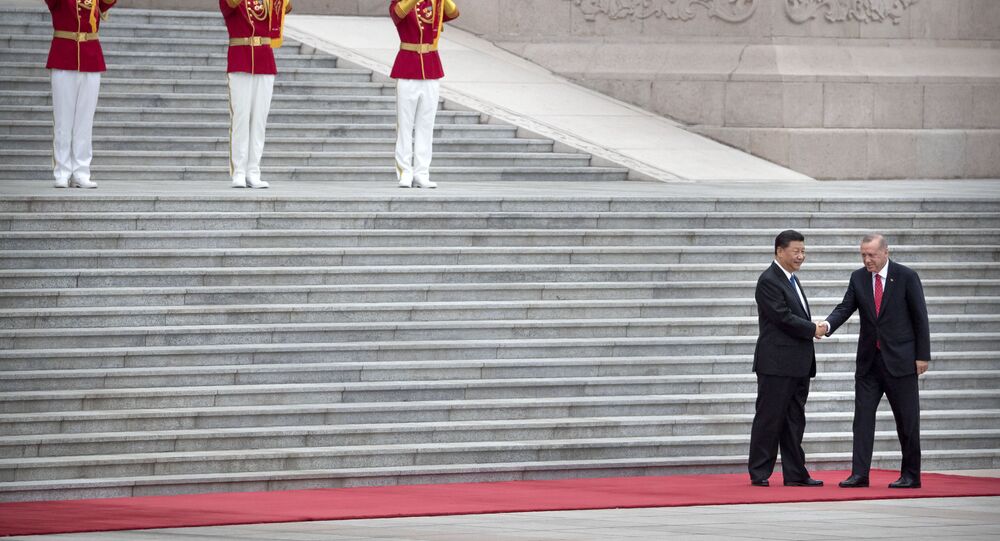 Turkey and Malaysia, both two large Muslim countries almost simultaneously gave a signal to the United States and other Western countries that they do not intend to play against China in the Xinjiang issue.

The hard call was made by Turkey’s President Recep Tayyip Erdogan during Beijing talks with China’s President Xi Jinping, and by Malaysia's Religious Affairs Minister Mujahid Yusof Rawa, who reported on the results of his trip to Xinjiang.

President Recep Tayyip Erdogan stated that "it was uncontested that all ethnic groups living in Chinese Xinjiang live happily in the conditions of development and prosperity of China”.

These words, voiced during the meeting with Xi Jinping, sounded four months after the Turkish Foreign Ministry called the situation of the Uyghurs in Xinjiang "a great embarrassment for humanity".

At that time this statement turned out to be the loudest criticism against China on the issue of Xinjiang by the Muslim world.

The change in Ankara’s position is the result of Beijing’s patient diplomatic efforts, said Li Bingzhong, director of the Centre for Turkish Studies at Shaanxi Normal University (SNNU).

“Turkey has previously criticised China’s policy in Xinjiang, but in fact, it was a statement only by the representative of the Turkish Foreign Ministry. It has been voiced not at a high political level and not necessarily reflected the position of President Erdogan.

Turkey, indeed, subsequently changed its position. The reason is that China’s Foreign Ministry and the Chinese Embassy in Turkey have done a great job. Chinese Ambassador to Turkey Deng Li clarified and conveyed the truth on this issue in an interview. On the other hand, the domestic policy and the diplomacy of Erdogan’s government are currently experiencing a very difficult period. The visit of Turkish President Erdogan to China is one of the ways to find a solution to their domestic and foreign policy problems. For the sake of its own interests, Turkey draws attention to issues of concern to the Chinese government, which are affecting the fundamental interests of China”.

A number of observers believe that Ankara’s past assessment of the human rights situation in Xinjiang could have been influenced by and even under pressure from the United States. Now the Turkish president at the talks with the Chinese leader assured that “the Turkish side will not allow anyone to drive a wedge into the Turkey-China relations”.

“Erdogan begins an active game with China. He, of course, is leading behind-the-scenes diplomacy, trying to influence Beijing for solving the Uyghur issue. Nevertheless, he is preparing to take a loan from China from which he had previously refused. Apparently, now the economic situation in Turkey is not easy, moreover, the Americans use sanctions against the Turks. Entering an alliance with China, Erdogan is simultaneously being friends with Russia. That is, he positions himself against the backdrop of Beijing and Moscow as a representative of a great Power. He also stresses that the Americans do act towards Turkey not quite how Ankara expects. By playing a big game with China, he, obviously, is trying to obtain the support of the adherents of Islam in Southeast Asia, which also is of considerable importance to him”.

Malaysian Minister of Religious Affairs Mujahid Yusuf Rava came under fire from politicians and human rights defenders in his country for photographs about Xinjiang after a seven-day visit to the area last week. The photos tell about the activities of vocational education and training centres in Xinjiang.

Amnesty International Malaysia Executive Director Shamini Darshni Kaliemuthu has been “deeply disappointed” by this trip photo report. She obviously expected to see on photos scenes from "concentration camp" about which there is so much noise in the West.

Blindly supporting West criticism of China, as well as equating the separatists as fighters for the rights of the Uyghurs in Xinjiang, is hardly in Malaysia’s national interests. The country itself faces a terrorist threat from the Islamists, who are trying to find refuge within the country and make it a platform for organising and carrying out terrorist acts.

Turkish president statement on Xinjiang was made on the day of the closed-door discussion by the UN Regional Centre for Preventive Diplomacy for Central Asia (UNRCCA) with the participation of members of the UN Security Council.

During the discussion, according to anonymous sources, representatives of the United States and Germany accused China of mistreatment of Muslim minority groups in Xinjiang.

In response, Ambassador Ma Zhaoxu, Permanent Representative of the People's Republic of China to the United Nations, stressed that the United States and Germany have no right to raise this issue in the UN Security Council since it is an internal affair of China.