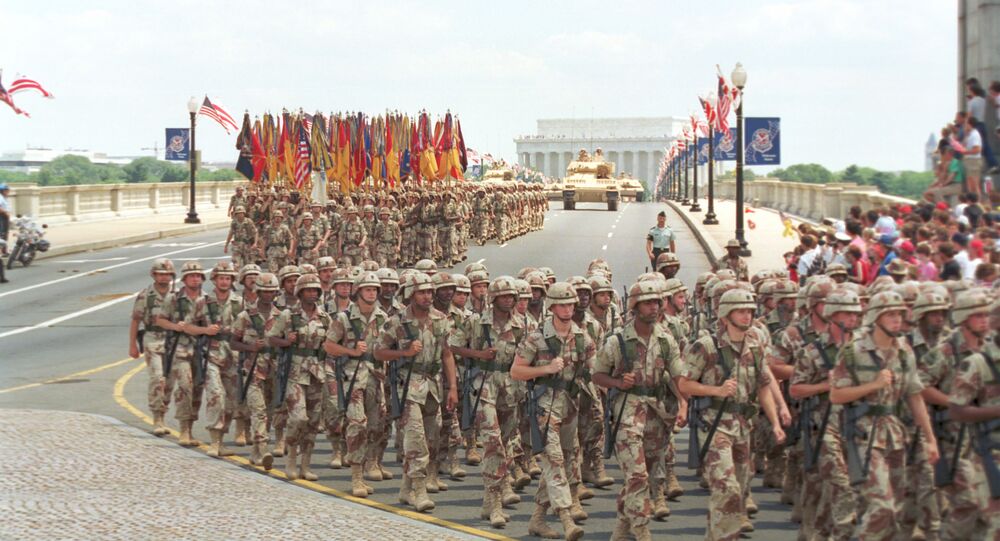 US President Donald Trump has yet to release the complete details of his military-centric Fourth of July event, but those against him are denouncing the move, claiming the president is being more self-serving than patriotic. History, however, may beg to differ.

A number of demonstrations are slated to take place alongside Trump’s “Salute to America” celebration in Washington, DC. Social justice, anti-war NGO CodePink in particular has scheduled a four-hour protest which originally planned to include a parade featuring the “Trump Baby Blimp.”

“We will bring together people opposed to the pain and suffering caused by this administration, from concentration camps at the border to supplying weapons used by Saudi Arabia to kill Yemeni children. We want to celebrate the power we have as Americans to work toward peace,” CodePink co-founder Medea Benjamin said in a Wednesday release from the organization.

While the NGO received a permit for their blimp, CodePink was told Tuesday that they would not be allowed to fill the balloon with helium. Speaking on the matter, National Park Service spokesperson Mike Litterst clarified to the Washington Post that the National Mall’s no-fly zone extends to downtown Washington, DC, too.

As a result, CodePink plans to feature the blimp west of the Washington Monument. Nevertheless, there will be a number of other organizations, groups and impromptu demonstrations, both by those against and in support of Trump.

[Segment starts around the 3:00 mark]

On Wednesday, Radio Sputnik’s Loud and Clear was joined by human rights and labor lawyer Dan Kovalik to make sense of the US president’s desire to have such a military-focused event, for which he has been pushing since viewing France’s Bastille Day military parade in 2017.

“The truth is the US is not being threatened by any other country; there’s no need for a show of force. It just seems, frankly, like a narcissistic, you know, display by Trump,” Kovalik told Loud and Clear hosts John Kiriakou and Nicole Roussell.

Roussell agreed with the lawyer, but also highlighted how the US has always touted its armed forces’ perceived excellence and that Trump is somewhat unintentionally pulling back America’s “mask,” revealing the historical parallels that date back to the signing of the Declaration of Independence in 1776 and how that was a “show of force over native peoples here in the US.”

“This is what this holiday represents, anyway. And it was a show of force of white, wealthy, slave-owning and property-owning men who had all of the power,” Roussell said. “While it is completely ostentatious, which is Trump’s style, it is actually, you know very much within … the framework of July 4th.”

Trump’s removal of the US’ said “mask” and exposure of the ruling class, Kovalik argued, result from his loud and crass way of leading the nation, especially when compared to his immediate predecessor, Barack Obama.

“Obama did terrible things,” the human and labor rights lawyer noted. “Obama and Trump could go toe-to-toe, at least, on many things, including warmongering and oppression of immigrants. But Obama did it quietly, with style and grace, which, frankly, benefited the ruling class, because, you know, we were able to maintain this pretense of decency.”

“Our country is not decent. And frankly, Trump represents that. I mean in many ways Trump is the president we deserve,” Kovalik added.