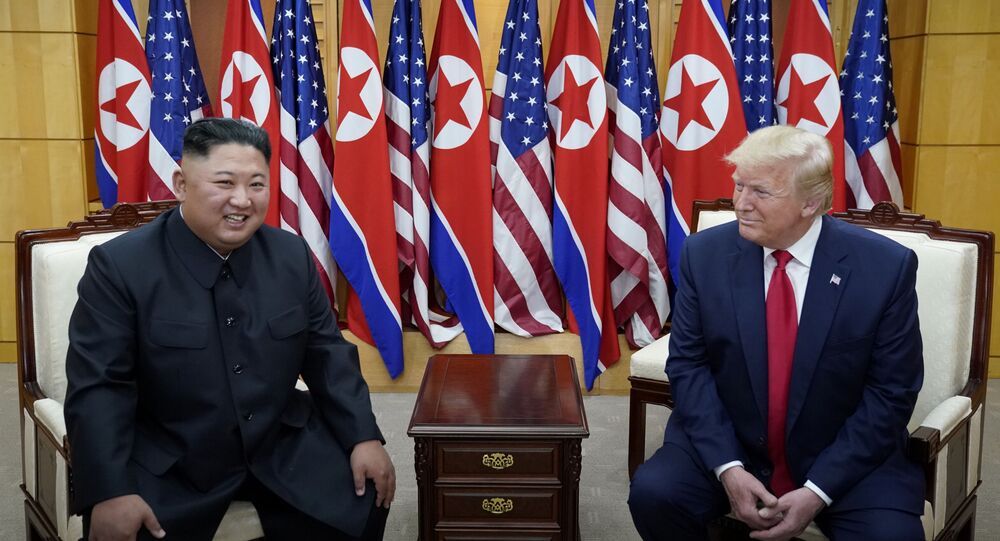 The New York Times reported on Sunday that the Trump administration is considering a nuclear freeze whereby the United States would accept North Korea's status as a nuclear power in exchange for Pyongyang agreeing to not increase the number of its nuclear weapons.

Trump and Kim held their first meeting in Singapore in June 2018 and their second meeting in Hanoi, Vietnam in February of this year. The Hanoi talks fell apart because North Korea wants sanctions relief before denuclearizing.

In contrast to his North Korea policy, Trump has taken a much harder line against Iran, including imposing several rounds of sanctions after exiting the nuclear deal in May 2018, along with a military buildup in the Persian Gulf.

Historian and political commentator Dan Lazare said that a constructive process towards a freeze agreement was possible and achievable.

"I think there's a good chance negotiations will move forward simply because everyone wants them to", he said. "This includes Kim, who's obviously looking for relief from US sanctions, and Trump as well since he's looking for a distraction from the unholy mess he's created in the Persian Gulf".

Seoul would also like to see some sort of resolution of the issue, as would Beijing, Moscow, and Tokyo, Lazare pointed out.

"This is a highly realistic goal on the administration’s part and I would be surprised if Kim doesn't grab it if it puts an end to the economic blockade", Lazare said. "With everyone so strangely reasonable, how can reason not go forward?"

Progress in the negotiations still faces formidable opposition on both the right and left sides of the US political spectrum, Lazare observed.

"Not that everyone's on board, of course. [US National Security Adviser] John Bolton is in a panic while [Senator] Chuck Schumer and other Democrats are none too happy because a rapprochement with North Korea could lead all too easily to rapprochement with Russia, their bete noir", he said.

However, Lazare said he doubted whether figures such as Bolton and Schumer would be able to do much to stop the process.

Easing tensions with North Korea would reduce and potentially eliminate the reason Pyongyang was determined to retain its own nuclear deterrent, Lazare explained.

University of Pittsburgh Professor of International Affairs Michael Brenner said that no mention has been made of the Singapore agreement that laid out a step by step plan for normalization of relations and the denuclearization of the entire peninsula.

Either the Trump administration, Brenner suggested, would agree to return to the Singapore deal reached at the first of the president’s three meetings with Kim or settle for a new deal that leaves North Korea in possession of its present nuclear stockpile but inhibits missile development.

"That may satisfy Kim since what he's wanted is a deterrent against possible US aggression or intimidation, and he already can hit Seattle", Brenner said.

"Seoul desperately wants normalcy, and doesn't care whether Kim could level Seattle or not", Brenner said. "Japan has a different viewpoint".

Brenner warned, however, that Bolton and US Secretary of State Mike Pompeo will try to sabotage any such agreement.

On Monday, the South Korean Unification Ministry said Seoul hopes that the third Trump-Kim summit last Sunday will serve as a "turning point" in the dialogue on denuclearization and promote inter-Korean ties.

Brenner said no one can predict whether or not this is a turning point, because Trump is impulsive.

"Nobody has any idea, including Trump. Nobody can since there is no logical process or coherent design in the White House: Just contradictory impulses", Brenner argued.

One of Trump’s impulses, Brenner explained, is to obliterate anyone who gets in the way. The other impulse is to make a grand gesture such as a North Korea nuclear deal that could win a Nobel Prize.

Lazare also observed the contrast in approaches to North Korea and Iran and their consequences.

"The more optimistic I am about one conflict, the more pessimistic I become about the other", Lazare concluded.

Views and opinions expressed in this article are those the speakers and do not necessarily reflect those of Sputnik.

US Not Discussing ‘Nuclear Freeze’ by North Korea - Bolton