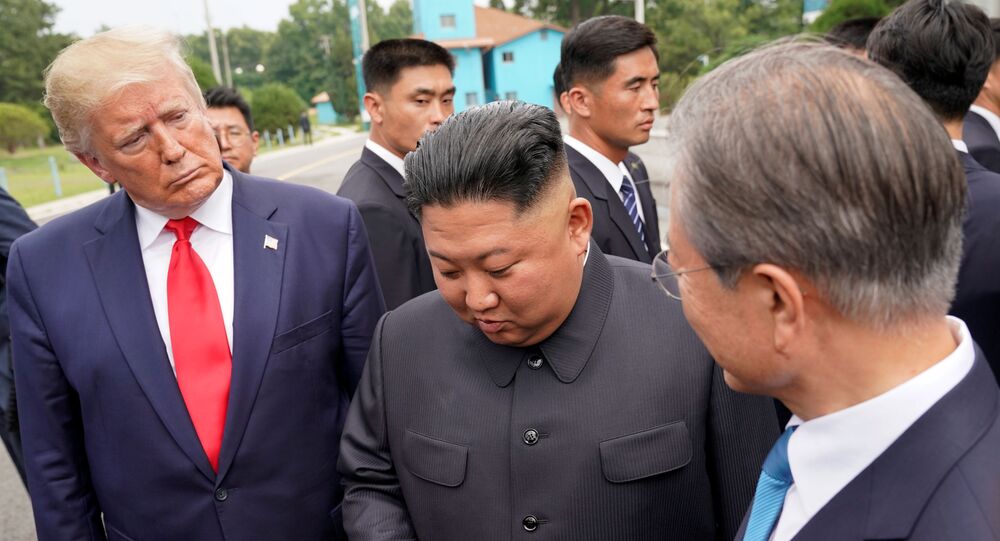 The impromptu but historic meeting between US President Donald Trump and his North and South Korean counterparts in the Korean demilitarized zone (DMZ) marked a number of firsts for the three nations, but Trump could see this as just another cog in his political machine.

Following a failed summit in Hanoi, Vietnam, many skeptics were proven wrong when Trump, North Korean leader Kim Jong Un and South Korean President Moon Jae In met at the DMZ for the first time on Sunday.

It was there that Trump became the first US president to set foot on North Korean land.

However, this meeting was much less formal than the previous summits in Hanoi and Singapore, with the US president appearing to first float the idea via Twitter.

It would later be revealed that DC-based news outlet The Hill spoke with Trump on June 24 concerning the planned meeting, but ultimately delayed its report per a White House request that cited “security concerns,” according to a clarifying tweet from reporter Jordan Fabian.

Phoning in from Seoul, South Korea, Sputnik News analyst and Radio Sputnik producer Walter Smolarek spoke with Loud and Clear on Monday to explain what this meeting means for diplomacy and communicate the South Korean public’s perception of it.

“The extreme, conservative element of South Korean politics are less happy about it, but really, almost across the spectrum, it’s a positive reaction,” Smolarek told host John Kiriakou, though he did note that Moon Chung In, President Moon’s national security adviser, did seem more cautious than hopeful when he discussed the DMZ meetup with Sputnik on Friday. In fact, the adviser had his doubts about Kim even showing up.

The news analyst added that coverage by South Korean media presents a “stark contrast of how the media of the United States is talking about it,” due to many mainstream US outlets’ consistent opposition to anything diplomatic from Trump’s administration.

Smolarek went on to note that improved relations between the Koreas and the US reduces the power of war hawks such as US National Security Adviser John Bolton, who was prepared to make a preemptive strike against North Korea.

Getting into the details surrounding reunification of the Korean Peninsula, the Radio Sputnik producer noted that both Pyongyang and Seoul seem determined to end the decades-long separation between their peoples and reunify families ripped apart by the 1950-53 Korean War.

“A peace treaty, I think, is sort of like one of the big milestones along the road to reunification,” Smolarek explained. “A lot of people in the United States don’t know that in 1953 the Korean War ended with an armistice, not a peace treaty, and that means that the United States is, technically, still at war with North Korea.”

Smolarek predicted Trump will use this technicality for the purpose of advancing his campaign ahead of the 2020 presidential election, selling himself as a peacemaker in the Korean Peninsula.

With US officials and mainstream outlets holding quite different approaches and attitudes toward the peninsula’s reconciliation efforts, it remains to be seen whether these showings of unity are the seeds of lasting peace or if they will disappear as quickly as they are being made.

Trump in the DMZ: Who Blinked and Who Won?