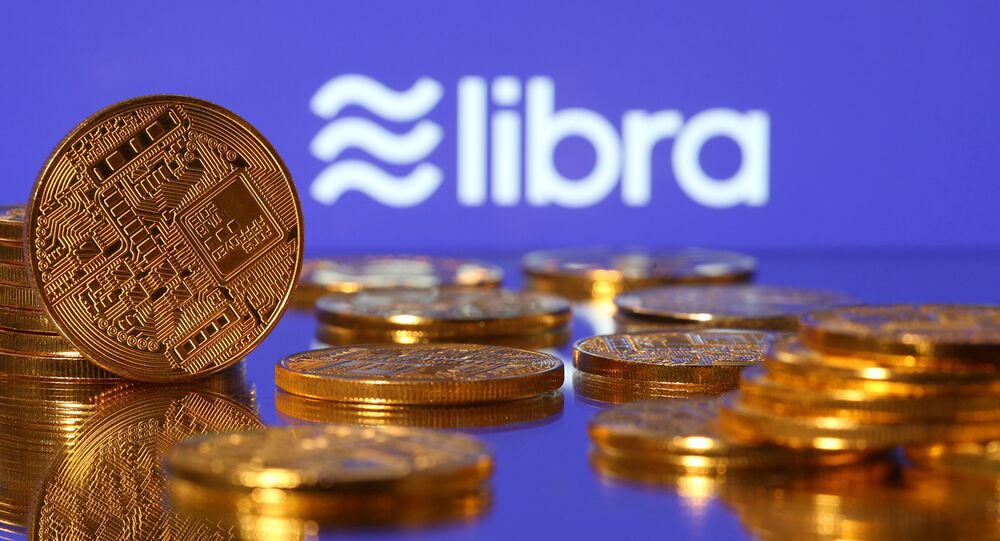 Facebook's Libra has an opportunity to come out on top due to the tech giant's highly-developed commercial ecosystem and a huge client base, says Chinese economic expert Liu Dongming, explaining the main differences between Libra and Bitcoin.

The People's Republic of China cannot afford to be left out in the era of global digital currency competition, argues Global Times, a daily Chinese newspaper, on the heels of Facebook's announcement of its new cryptocurrency named Libra.

"China must be involved in this round of the digital economic competition, given the fact that digital currency will become an inevitable trend, bringing profound changes to the digital economy, global technology, finance, capital and economic structure", the newspaper wrote on 24 June.

The tech giant's new digital currency has one serious advantage over its predecessors, most notably Bitcoin- it will be backed by a reserve to keep its value stable. Facebook also has 2.4 billion users which will give Libra an immediate boost. A digital wallet for Libra called "Calibra" is due to become operational in 2020.

​"Facebook has a very strong commercial ecosystem", said Liu Dongming, head of the Centre for International Finance Studies of the Academy of Social Sciences of China. "Actually, JPM Coin and IBM's Stablecoin could not make so much noise because of the lack of a client base. Libra from Facebook has attracted the attention of the whole world because Facebook as the global giant of social networks, brings together 2.4 billion users".

According to Liu, once Facebook introduces cross-border payments the volume of transactions could very soon reach $700 billion. Libra will be supported not only by stable public means of payment but also by an extensive commercial ecosystem, he explained.

The economic expert recalled that initially a digital currency was considered legal tender only if it was issued by the central bank of a country. Later, stablecoins – asset-backed cryptocurrencies – began to emerge. Stablecoins could be pegged to a currency, or to exchange-traded commodities, which transform the very concept of legal electronic transactions, according to Liu.

"It has turned out that there is an alternative," he noted. "Stablecoins, including Facebook's Libra, have begun to develop in Western countries. They are an alternative to crypto-currencies issued by central banks. This is a cryptocurrency secured by legal means of payment and government securities. There are some "stable-coins" which are 100 per cent-backed up by sovereign funds".

The People’s Bank of China (PBOC) had earlier discussed the idea of a Chinese cryptocurrency. Furthermore, the PBOC possesses 78 cryptocurrency-related and 44 blockchain patents. Besides, in late 2018, the PBOC announced that it would hire cryptocurrency, programming, economics and juridical specialists.

What's Behind China's 'Change of Heart'?

China's growing interests in digital currency mark a shift from Beijing's earlier distrust in electronic money. For years the Chinese authorities have tried to curtail the development of a cryptocurrency sector inside the country.

In September 2017, the PBOC declared initial coin offerings (ICOs) illegal saying that some ICOs could be financial scams and pyramid schemes. According to Chinese regulators, cryptocurrency transactions could potentially open the door to the capital flow out of the People's Republic. Under current rules, an individual cannot export more than $50,000 per year from the country. However, the Chinese authorities cannot control the volume of transactions for the exchange of fiat money to cryptocurrency.

So, what's behind Beijing's apparent change of heart?

"In the past, the US established dollar hegemony to have global finance and currency circulation under its control", Global Times underscored. "What would happen if the same story repeated itself in the digital currency era? If China cannot participate in this new phase of the digital economic revolution, then it may find itself in a passive position within currency competition, not to mention it could lose its advantages within the internet and financial technology sectors".

At the same time, the media outlet warned that tough regulations of digital currencies would also be needed to ensure the country's financial stability.

While Facebook's Libra is likely to remain stable being supported by top global corporations such as Visa, Mastercard, Paypal, eBay, Uber, and Lyft which would form the Libra Association, a Geneva-based entity, the newly-proposed digital coin has raised concerns among US lawmakers.

"Facebook is already too big and too powerful," Democratic Senator Sherrod Brown tweeted on 18 June. "We cannot allow Facebook to run a risky new cryptocurrency out of a Swiss bank account without oversight".

Facebook is already too big and too powerful, and it has used that power to exploit users’ data without protecting their privacy. We cannot allow Facebook to run a risky new cryptocurrency out of a Swiss bank account without oversight. https://t.co/IjZOFNai3r

​US Congress has already scheduled two hearings on the Libra digital currency, with the Senate Banking Committee scheduled to discuss Facebook’s Libra on 16 July, and the House Financial Services Committee following-up on 17 July.

The views and opinions expressed by Liu Dongming are those of the speaker and do not necessarily reflect those of Sputnik.

Is Facebook's 'Libra' Coin a Mechanism to Control Your Behavior?