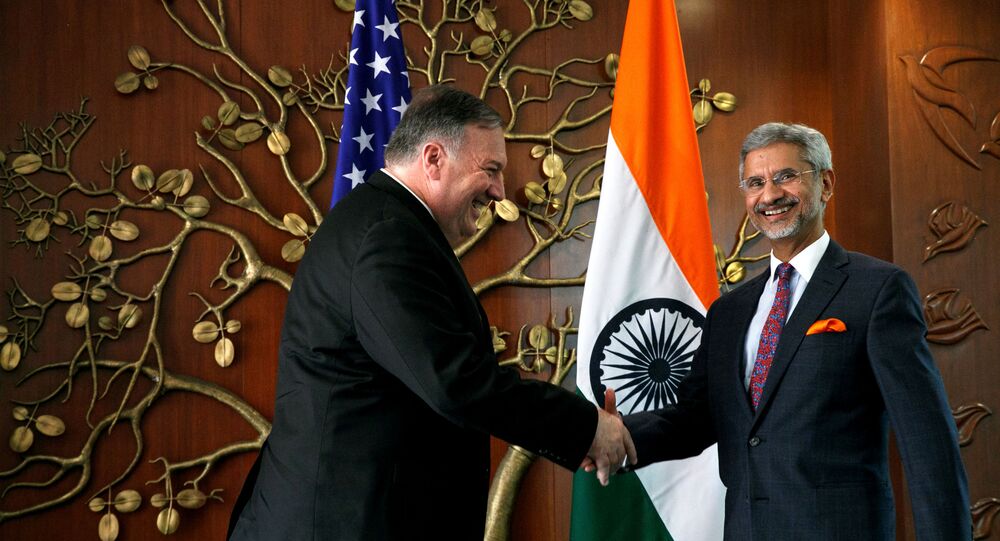 US Secretary of State Michael R Pompeo flew in to New Delhi on 25 June night for a day-long interaction with the Indian leadership. Ahead of the visit, Pompeo had said Washington is working to ensure a level-playing field for American companies operating in India.

New Delhi (Sputnik) - Dr Samir Saran, President of the Observer Research Foundation (ORF), an Indian think tank, said that the Indo-US relationship is at a critical point even though both sides have shown a willingness to sort out their differences.

Sputnik: Do you think the US sees India as an equal partner on the basis of the joint statement released today?

Dr Samir Saran: Yes, there is a new maturity in India-US relations. Despite disagreements, both India and the US are aware of the significance of their relationship for global affairs. The tone at the joint statement suggested a willingness to negotiate differences rather than respond through tariffs or sanctions.

Sputnik: What are your thoughts about the perception that the US wants to dictate India's energy and defence policies? For instance, the Iran oil issue and buying S-400 missiles from Russia...

Dr Samir Saran: The US is accustomed to partners mirroring its security choices. India will be different—and Washington is internalising this fact. Just last week, the chairman of the US House Foreign Affairs Committee wrote to Pompeo seeking an end to sanctions and calling for clarity and predictability in India-US bilateral relations. India will likely negotiate for space to manoeuvre around American sanctions—and Washington will concede with some conditions.

Sputnik: How do you see the Pompeo visit in geopolitical terms and its impact on India's neighbourhood, especially China, Pakistan, and Afghanistan?

Dr Samir Saran: Pompeo's visit is more about arresting bilateral friction rather than about South Asia. However, India and the US are indeed coordinating their postures towards both China and Pakistan. Both see the former as a geopolitical rival and the latter as a disruptive regional actor.

Afghanistan, on the other hand, is a more complicated situation given that India and the US have misaligned interests on some core issues. It is essential for both to make choices that minimise costs to each other's interests in Afghanistan.

Sputnik: Do you see India having clarity in positioning itself in the emerging new world order?

Dr Samir Saran: An emerging clarity, yes. India is doing well in defining its geopolitical ambitions—in terms of institutions, partnerships and geographies. However, it is still not a geo-economic actor. New Delhi is yet to identify and act on its economic interests even though most large states are now securitising their industries and markets.

Sputnik: What should India's stand be on the Huawei issue on 5G rollout, which the US is opposed to?

Dr Samir Saran: A full ban on Chinese telecom companies may not be financially feasible or even necessary for India. However, total dependence on Chinese infrastructure is a security risk. India must model a regulatory environment that allows China to invest, but with greater scrutiny and oversight.

Sputnik: How critical is it for India and the US to build a better relationship?

Dr Samir Saran: The transatlantic relationship defined the 20th-century international order. Given the realignments that are underway around the world, it is the Indo-US relationship, which among a few others that carries the potential to replicate this feat in the 21st century. This thinking must underline all future negotiations between India and the US.