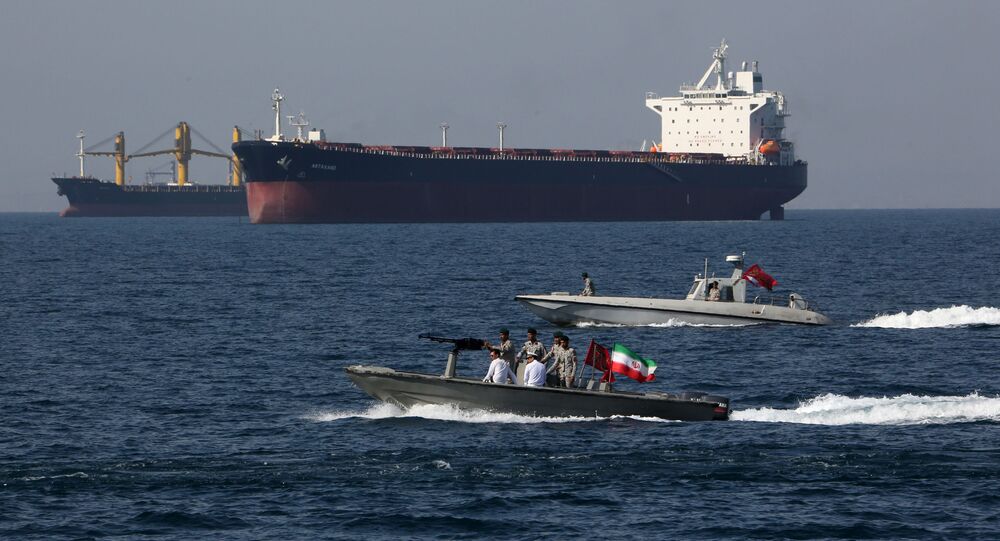 World fears of war between the United States and Iran have intensified after a US spy drone was shot down by Iranian forces. Zalmay Gulzad, a Professor of Social Sciences at Harold Washington Community College in Chicago, expressed his opinion about latest developments around escalating US-Iran tensions in the Persian Gulf.

Sputnik: According to media reports, while advisers to Trump were calling for a military strike against Iran in response to the downing of an American drone that Tehran claimed violated its airspace, the president’s favourite Fox News anchor, Tucker Carlson, told him that the use of force would be "crazy". In your view, how significant is it that the advice of the news anchor stopped the military operation just 10 minutes before they were supposed to be started?

Professor Zalmay Gulzad: Well, you have to understand that “terror hawks” in the Trump administration – John Bolton, Mike Pompeo – they want war but the only media in the United States that’s in support of Trump is Fox, Tucker Carlson and the rest of them. So the idea, the main reason that the United States changed its mind in 10 minutes is because [of] the following reason - Iran is not Afghanistan, Iran is not Iraq. It is a big country, 80 million people, and they have very sophisticated rockets. And this not be between Iran and the United States. It will be [an] all Middle East war because you have to understand the alliance between Tel Aviv and Riyadh and Pakistan. And then also Iran has proxies in the region that could harass the United States military in the area, what they call terrorist activity, against American soldiers because we have almost 70,000 troops in that area, American troops in the area. So, the idea that the Fox media has a lot of influence over the thinking of Trump because this is the only friendly media he has.

Professor Zalmay Gulzad: This is a very unique administration that we have ever seen in American history. This is very different. If you could see that the total administration is not…we don’t have a defence minister, we don’t have money. Things that we get in appointed, the people in those areas. Because of the lack of support from the rest of the media, the total American media is against Donald Trump. The only friendly media that is supporting Donald Trump is Fox and anchormen there have a lot of influence. And plus you have to understand that election is coming very soon. And the election is requiring, because Donald Trump promised that he will handle all the American wars in Afghanistan, in Iraq, in Libya, in Syria and all this. So that’s a promise that he wants to keep because he doesn’t want to jeopardise his election in 2020.

Sputnik: In your view, who in the White House would have benefited from a US military strike against Iran?

Professor Zalmay Gulzad: You have to understand that the Israeli lobby is very, very strong in the United States and that the Israeli lobby is dictating American foreign policy. You have to understand that if you look at the invasion of Iraq, invasion and conflict in Syria, overthrowing of the Libyan leader and all of this, this was beneficial for Tel Aviv, for Israel. So Israel is playing a major role here in American foreign policy. The Israeli lobby is making decisions, so the benefit goes back to Israel. Because we are doing the dirty work for Israel. Israel doesn’t want Assad in Syria. Israel doesn’t like Libya’s Gaddafi. Israel doesn’t like Saddam Hussein. So these are all taken care of. There is an alliance between Tel Aviv and Riyadh, Saudi Arabia. Even though they are two different groups but yet against Iran they can make this coalition. And in that coalition, Pakistan is there too because of autocratic regimes such as in Israel, Saudi Arabia and Pakistan.

Sputnik: In your opinion, what message did Iran want to send to the United States by downing the drone?

Professor Zalmay Gulzad: Well, Iran is being punished very badly economically. So Iran is suffering from that. And also historically Iran will never forget what the United States did in 1953. They overthrew the democratic regime of Mohammad Mosaddegh and they brought the Shah, practically, decide the total society. So Iran will never forget it. And there are many countries that will not forget what the United States has done. Like in Afghanistan they created the Taliban and Mujahideen. And this will take time for people to digest it and think about it. So Iran is suffering economically but Iran is going to resist because Iran knows that they are capable, that it is not easy for the United States [to do] like what they did in Iraq and Afghanistan.

Sputnik: I totally agree but at the same time Iran wanted to show: “please, don’t touch us” and to show their reply, what it would be if a military escalation started, maybe that kind of thing?

Professor Zalmay Gulzad: What you saw is that if Iran is going to war, it will go this way. Just like what Saddam Hussein did. Iran – it will also attack Riyadh, and also attack Israel. And also the proxies of Iran are going to harass Israel and Saudi Arabia. So it will be an [all-out] war in the Middle East. It won’t be between the United States and Iran alone. Because you have to understand that Saudi Arabia is the leader, considers itself the leader of the Sunni sect of Islam, which is the majority of Muslims. And then Iran is claiming that they are the leader of the Shia sect of the Muslims in the Middle East. So there are a lot of minorities here living in Saudi Arabia and other Muslim countries. So all this will be helping the proxy war with the United States. So it is not that easy.

Sputnik: Has the "maximum pressure" policy succeeded in pressuring the Islamic Republic?

Professor Zalmay Gulzad: The economic sanction – yes. They have succeeded in that because Iran is suffering and also they cannot sell, the only source of income they have is the oil and they cannot sell that. So that pressure, if it continues, that will really destroy Iran. But also the United States is still careful about that. If there is a war, the Strait of Hormuz will be closed and many countries will suffer because the oil cannot be transported from the Persian Gulf to different countries. Like, for example, we saw the two tankers that were on their way to Japan, they were destroyed. They will affect the total world economy if this war in the Persian Gulf continues.

Sputnik: [You have already mentioned frequently but] anyway what consequences can be expected if an armed conflict between such strong military powers breaks out?

Professor Zalmay Gulzad: Well, as I said that economically it won’t be a very good idea because the Persian Gulf is producing oil and supplying oil to many countries: China, Japan, Europe, and all these places. So, if there is a war there, they will not be able to supply their oil, the Strait of Hormuz will be closed and economically the price of oil will grow in the market. That will affect the total world economy. So it is a very difficult situation there.

Sputnik: Do you think the recent escalation will still lead to a military conflict?

Professor Zalmay Gulzad: It is possible because you see this administration is not very stable. And even though that election is coming and all this, it is not a very stable administration. And the Democrats are demanding that Donald Trump has to get an OK from Congress to go to war with Iran. But the Congress is not going to approve that war for Donald Trump because the Democrats are against the war in that case. But it’s not because the Democrats do not like war. If you remember Obama destroyed three or four countries: Libya, Yemen, Syria, and all these. But because of the election, the Democrats are a little bit careful about approving the war [with] Iran.