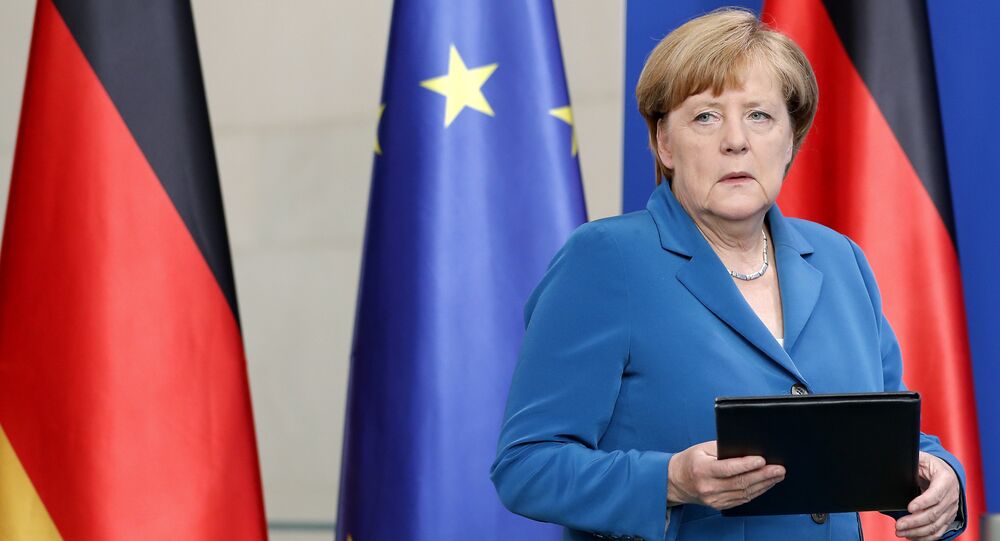 Germany is sending "bound and sedated" migrants back to Italy, La Repubblica, a centre-left Italian daily, broke on 15 June, adding that what's going on looks more like "human trafficking" rather than a transfer under the EU's Dublin Regulation 604/2013.

The Dublin convention stipulates that rejected refugees should be sent to "the responsible member state" i.e. the country through which the asylum seeker first entered the EU.

According to Daniele Pozzati, a Munich-based Italian journalist and political observer, the story published by La Repubblica illustrates how German Chancellor Angela Merkel is making European states opposed to her "open-border policy" take in unwanted migrants.

"Having failed to bully the Visegrad countries (Poland, Hungary, the Czech Republic, Slovakia) into accepting migrants, and not wanting to inconvenience pro-EU countries such as France and Spain by asking them to put their fine pro-immigration words into practice, [Berlin decided that] the obvious place left is Italy, that large Mediterranean country run by 'evil populists'!" Pozzati said.

For his part, Daniele Scalea, the president of the Italian-based Machiavelli Centre of Political and Strategic Studies (Centro Studi Politici e Strategici Machiavelli), accused Berlin of "hypocrisy" by saying that it was protecting the rights of migrants in words and not in deeds.

Shedding light on the root of the problem, Scalea suggested that Italian leftist governments had opened the door to migrants confident that many of them would then illegally move to Northern Europe. According to him, the current flow of rejected asylum seekers from Germany consists of those who entered Italy under the Gentiloni cabinet.

Mauro Indelicato, the editor-in-chief of Infoagrigento.it, echoed Scalea by stating that the sedating practice described by La Repubblica indicates that Berlin does not respect the human rights of those whom it forces to leave the country.

"This inflicts damage to the authority of Germany and this is a serious violation, which is seemingly not given due importance", he stressed, adding that the Dublin Regulation became obsolete.

According to La Repubblica, the number of requests to send refugees back to Italy is on the rise in Germany. In the first quarter of 2019, 4,602 requests were received by German Interior Minister Horst Seehofer, which constitutes 33 per cent of the total of applications sent to all EU partners. It's a 50 per cent increase compared to the previous quarter. Over the last six months Germany has sent 1,200 migrants to Italy by plane.

​"If someone in Berlin or Brussels thinks of dropping dozens of migrants via non-authorised charter flights in Italy, they should know that there is not and there will be no airport available," Salvini tweeted. "We will close the airports like we closed our ports."

The current Italian government – that came to power in June 2018 - has adopted a series of measures against illegal migration including the so-called "Salvini Decree" which substantially reduced migrant sea landings.

In response to Salvini's warning, Berlin denied that it planned to fly rejected refugees back to Italy.

“No transfer flight is planned to Italy in the coming days,” the German Interior Ministry said as quoted by Reuters on 7 October 2018.

However, it appears that the latest article by La Repubblica has proven the opposite.

© AP Photo / Emilio Morenatti
Italian border police officers escort sub Saharan men on their way to a relocation center, after arriving in the Golfo Azzurro rescue vessel at the port of Augusta, in Sicily, Italy, with hundreds of migrants aboard, rescued by members of Proactive Open Arms NGO, on Friday, June 23, 2017

Commenting on the Merkel government's double-standard approach towards migrants, Daniele Pozzati suggested that the problem originates in September 2015, when the German chancellor "invited refugees to Germany" catching by surprise both her political rivals and allies.

"Merkel's popularity quickly fell, and her CDU party went on to lose 7 percentage points in the September 2017 general elections (down to 30 per cent from 37 per cent in 2013) - a sure sign that her pro-immigration policy had not gone down well with the electorate", Pozzati recalled. "Still, Merkel never admitted she made a mistake. She never made an official U-turn on her open-border immigration policy. Instead, she tried to bully the EU’s weaker, countries - notably Hungary, Poland, Slovakia, etc. - into accepting mandatory migrants/refugees quotas".

According to the Italian journalist, Angela Merkel preferred "to outsource" the immigration crisis to other EU countries unable to withstand continuous opposition at home.

Pozzati did not rule out that Germany's decision to "flood" Italy with rejected migrants could be part of a plan to "undermine Salvini’s anti-immigration stance".

"Having damaged the Italian economy with a German-run Euro, which produced Germany's current gargantuan 8-9 percent surplus -  illegal, it must be remembered, under the Maastricht Treaty – Germany and France now aim to further destabilize Italy, and not just its government, by flooding it with migrants", the Italian political observer suggested.

As of yet, Berlin has remained silent over the latest exposure by La Repubblica.

"Germany's media are ignoring the reports, hence, no scandal", Pozzati said. "It is rather another step into alienating the EU among Italian people, and increasingly, elites as well".

Main Problem is Not Refugees, it's Our Own Government - AfD Politician