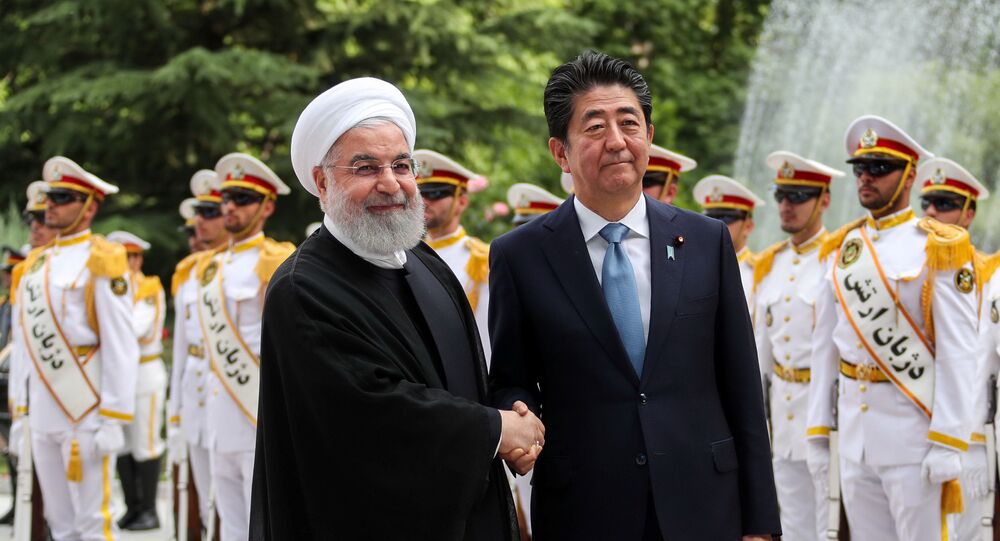 WASHINGTON (Sputnik) - Japanese Prime Minister Shinzo Abe’s visit to Tehran was doomed from the outset given the US offer he delivered was impossible for any reasonable government to accept, former UK Ambassador to Syria Peter Ford said.

On Thursday, Iranian Foreign Minister Mohammad Javad Zarif in a tweet accused Abe - along with with US, Israeli, Saudi, and UAE officials - of engaging in "sabotage diplomacy" through a coordinated effort to blame Tehran for attacks on oil tankers in the Gulf of Oman. Abe reportedly brought Iranian leaders a proposal from President Donald Trump to open talks but with no cessation in Washington’s pressure campaign.

"Abe's attempted mediation was doomed before it began because no reasonable government could take Trump's offers seriously," Ford said.

Abe’s three-day visit, ostensibly meant to soothe US-Iranian tensions, was interrupted on Thursday when two oil tankers - including one owned by a Japanese firm - were hit by explosions in the Gulf of Oman, which the Trump administration immediately blamed on Tehran.

The Pentagon, Ford said, is likely furious with Secretary of State Mike Pompeo and White House National Security Adviser John Bolton for escalating tensions with Iran and putting the US military in a precarious position.

The US military should be worried, Ford argued, because Iran has every right to strike back.

"Iran is being provoked beyond endurance by a reckless US policy of ‘maximum pressure’ which amounts to economic warfare," Ford said. "How could the US aim at stopping all Iranian oil exports and not expect Iran to put into effect its warning that it could close the Gulf?"

On Friday, US Acting Defence Secretary Patrick Shanahan told reporters that the United States is focused on building an international coalition in light of recent intelligence including video clips related to the incident in the Gulf of Oman.