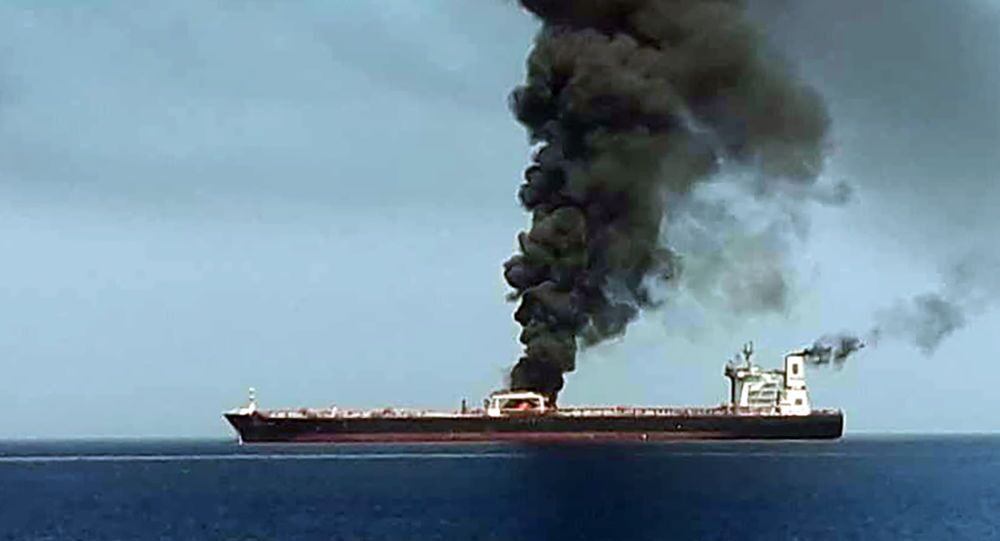 Iran most likely attacked two oil tankers in the Gulf of Oman Thursday as a show of force amid tensions between Tehran and Washington, Peter Ford, the former UK ambassador to Syria, told Radio Sputnik’s Loud & Clear. Oil prices spiked following the attack - just a hint of what economic chaos might follow a US attack on Iran.

"I think… that Iran has been behind all these attacks. Just a couple of weeks ago, US spokespeople were beating their chests and boasting about the policy of maximum pressure [on Iran] and how they were going to apply more pressure. They dispatched a mighty fleet, and now after these attacks, they are retreating, it seems to me," Ford told hosts John Kiriakou and Brian Becker.

https://www.spreaker.com/user/radiosputnik/who-s-blowing-up-oil-tankers-in-the-midd
The "Front Altair" oil tanker, owned by Norwegian company Frontline, and the chemical tanker "Kokuka Courageous," owned by Japanese company Kokuka Sangyo, were attacked Thursday near the Strait of Hormuz, a narrow stretch of water between the Persian Gulf and Gulf of Oman, and one of the most important arteries for world oil supplies.
© AP Photo / Mark J. Terrill
US Senator Graham Calls for More Sanctions on Iran Over Gulf of Oman Attack Allegations

More than 18 million barrels of oil pass through the narrow waterway each day, accounting for 30% of the world's oil shipments by sea, according to the US Energy Information Administration.

In response to the attack Thursday, oil prices rose by 4% with Brent Crude, the international benchmark for oil prices, spiking to $61.99 a barrel.

Following the incident, US Secretary of State Mike Pompeo was quick to blame Iran for the attacks on the vessels.

"It is the assessment of the United States government that the Islamic Republic of Iran is responsible for the attacks that occurred in the Gulf of Oman today," Pompeo said during a Thursday press briefing.

Pompeo explained that the assessment is based on intelligence, weapons used, level of expertise needed to execute the operation and the fact that no proxy group operating in the area has the resources or proficiency to act with such a high degree of sophistication, Sputnik reported. However, Pompeo did not provide specific evidence to support his claims.

Iranian Foreign Minister Mohammad Javad Zarif, however, called the attacks "suspicious," suggesting that they were related to Japan's efforts to advance the peace process in the Middle East.

"It's noticeable that it's the Iranian media who [first] reported the incident. It's not like they were trying to play [the incident] down. Iran would not be so foolish as to brazenly boast about taking out these tankers," Ford explained. "That would inevitably give the US no choice but to react with heavy retaliation, but now with the way things are, [US President Donald Trump] is left in a quandary. He is going to think twice before precipitating yet another mega crisis which would send oil prices surging even more than they are surging already," he said.

On June 7, the US announced that it would be imposing sanctions on Iran's Persian Gulf Petrochemical Industries Company (PGPIC). The move comes after the US ordered the deployment of an additional 1,500 troops, a task force of B-52 bombers and one of its aircraft carrier strike groups to the region last month. Iran responded by threatening to close the Strait of Hormuz.

"The people who will be feeling their collars at the moment is [National Security Adviser] John Bolton and Pompeo, who only seven days ago were boasting about the policy of maximum pressure. If Iran did it [committed the attacks], they just administered a master class of what you get when you boast about maximum pressure," Ford said.

According to Ford, the theory that the attacks were carried out by the US to deter Japanese Prime Minister Shinzo Abe from improving diplomatic relations with Iran can be ruled out.

"A sophisticated, coordinated operation like this would have taken weeks to prepare. But the Abe visit was only set up days ago. There simply wouldn't have been time to mount an operation if it was designed to somehow exploit Abe's visit," Ford noted.

"Iran's message is simple: if you choke off our exports with your sanctions, then we will make sure that nobody else is able to export from the Gulf," he said.

On Thursday, the US Central Command said that US Navy destroyer USS Mason is en route to the Gulf of Oman to defend US interests, including freedom of navigation, after the attack on the oil tankers.