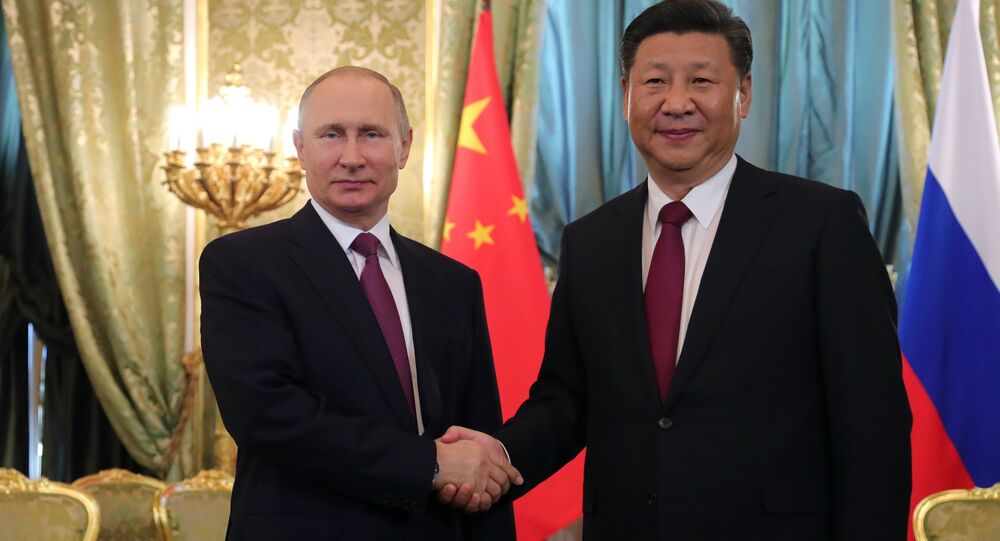 Strategic Partnership: What Message are Xi, Putin Sending to Trump?

The 70-year-long Russo-Chinese diplomatic relations have entered a new era, Russian President Vladimir Putin and his Chinese counterpart Xi Jinping signalled on 5 June. Chinese and Russian scholars have shed light on what is drawing Moscow and Beijing closer together and what signal the two powers are sending to Washington.

"Today the Russian Federation and the People's Republic of China are united by multi-faceted comprehensive strategic partnership based on the immutable principles of respecting each other's sovereignty, national identity and interests, equality and neighbourliness", President Putin stated at the gala marking the 70th anniversary of diplomatic relations between Russia and China on 5 June.

The deepening of Russo-Chinese ties is linked to the new international situation and reflects the enormous potential for cooperation between the two powers, says Feng Shaolei, director of the Academy of International Relations and Regional Development at Guangdong University.

"The historical conditions for the development and transformation of China and Russia have already created great opportunities for their cooperation", Feng emphasised. "In addition, China and Russia have maintained political stability for a long period. Finally, the countries have accumulated a lot of experience of bilateral cooperation, including historical lessons, which provides a solid basis for long-term and large-scale cooperation in the future".

© Sputnik / Michael Klimentyev
Russia, China to Boost Energy, Agricultural Trade Due to US Trade War – Scholars
Ma Youjun, director of the centre for Russian Studies at the Heilongjiang Provincial Academy of Sciences (HAS), believes that Russian-Chinese cooperation may become the cornerstone of global political and economic stability. According to him, the situation on global markets has become largely unpredictable because of the US efforts to implement trade protectionism.

"The international situation makes it necessary for Russia and China to strengthen cooperation", the scholar highlighted.

For his part, Alexander Lomanov, chief researcher at the Institute for Far Eastern Studies of the Russian Academy of Sciences (RAS), underscored that the new wording of the Xi-Putin joint statement clearly indicates a stark difference in Beijing's relations with Moscow and Washington: while US-China relations have hit a new low amid the ongoing trade war, Russo-Chinese cooperation is on the rise.

"China and Russia continue to drift together, as there are no serious contradictions between them; given the deterioration of the international atmosphere, additional prerequisites are created to enhance coordination of cooperation [between Moscow and Beijing]", Lomanov opined.

© AP Photo / Andy Wong, File
Xi Jinping Calls Trump His Friend, Says US Leader Does Not Want to Sever Ties With China
The Russian researcher did not rule out that the further Russo-Chinese rapprochement would prompt the US and its allies to step up pressure on the countries: "The strengthening of Russia and China extremely annoys the West, which is trying to prevent this at all costs", he remarked.

However, Western concerns are largely groundless, as Moscow and Beijing's strategic partnership is unlikely to morph into a military alliance, says Yana Leksyutina, a researcher at St. Petersburg State University.

She drew attention to the Xi-Putin joint statement that underlined the refusal of the two countries to establish allied relations aimed at targeting third parties.

"China and Russia have sent a signal to the world that they are strategic partners, but at the same time, their partnership is not directed against third countries, and they do not plan to conclude allied treaties", Leksyutina stressed. "This principle is designated as one of the basic principles, which will be preserved for the future. It is very important".

© Sputnik / Alexey Nikolskij
Chinese President Notes Moscow-Beijing Ties as Example for Other Nations
Yet another message sent by the heads of China and Russia is that the world can no longer be a unipolar one, remarks Oleg Timofeev, an associate professor at the Peoples' Friendship University of Russia.

"Russia and China have placed emphasis on multilateral cooperation", Timofeev said. "China is going through a rather difficult period amid the US-driven trade war. Previously, [the US and China] had maintained consistent cooperation. Now the situation has changed, and, of course, China needs stronger relations with its traditional partners. In many ways, Russia is China's most important strategic partner".

The US imposed high tariffs on Chinese products in 2018, citing the substantial trade imbalance between the two countries, prompting a tit-for-tat response from the People's Republic. Although Washington and Beijing agreed on a trade truce in December 2018, it was unilaterally disrupted by the US in May 2019, as the Sino-American trade negotiations stalled on 10 May. The Trump administration imposed high tariffs on $200 billion of Chinese goods, signalling that new restrictions were about to follow.

While US-China relations are rapidly deteriorating, the Russo-Chinese partnership is thriving. Bilateral trade between the two countries increased to an all-time high in 2018, reaching $108 billion. China and Russia are expanding energy cooperation, including the Power of Siberia pipeline project and the production of liquefied natural gas (LNG) on the Yamal Peninsula. Apart from this, Moscow and Beijing have boosted aerospace and military-technical cooperation, while at the same time stepping up security ties.

Xi Jinping Calls Trump His Friend, Says US Leader Does Not Want to Sever Ties With China