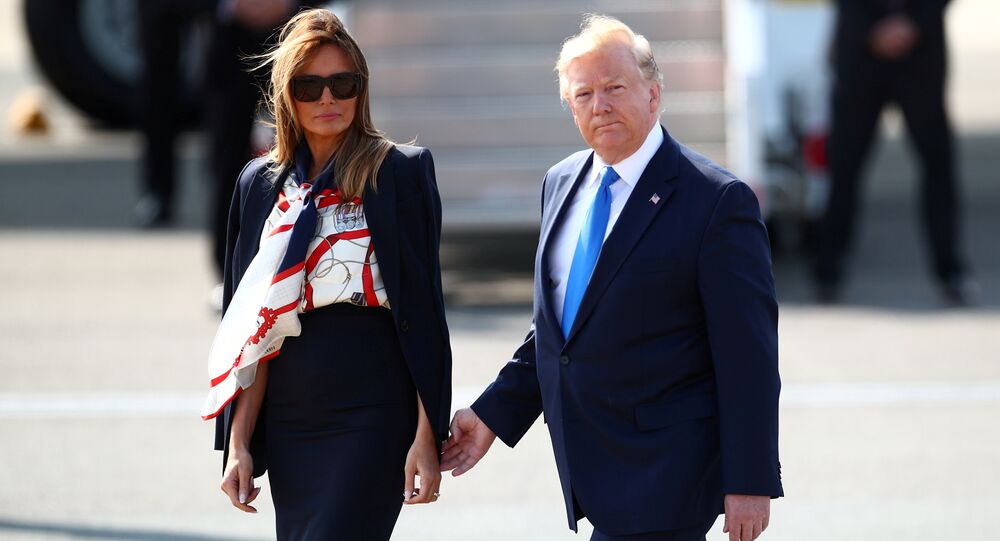 Donald Trump's UK visit coincided with Theresa May's resignation as British prime minister. The future of the UK-US relationship and a potential post-Brexit free trade agreement between the two powers now depends on who will take the reins of UK politics, say British academics.

"As the UK makes preparations to exit the European Union, the United States is committed to a phenomenal trade deal between the US and UK", Trump said during a joint presser with outgoing British Prime Minister Theresa May on 4 June.

According to Kevin Dowd, a British professor of finance and economics, while the UK establishment is largely "in the pocket of the EU", the future of the US-UK bilateral agreement depends on who will replace May at the helm of the government.

"President Trump's comments are very helpful and come at exactly the right time", Dowd said. "All the UK needs now is a prime minister with some backbone who can simply say, 'Let's make a deal'. A deal with the US that is. With a bit of luck, his comments will shame the Conservative leadership candidates into doing what they should have been doing all along, instead of listening to EU blackmail".

Trump Singles Out Johnson as an 'Excellent' Pick for PM

In addition to describing the prospects of a post-Brexit trade deal between London and Washington, Trump dropped a hint about the potential pick for a British prime minister, calling ex-Foreign Secretary Boris Johnson an "excellent Tory leader" during his 2 June interview with The Sun.

"I like him, I've liked him for a long time. I think he'll do a good job", the US president reiterated, during the presser with Theresa May.

© REUTERS / Hannah McKay
How Barr's Spygate Probe May Shed Light on UK's 'Deep State', Theresa May
Yet another British politician praised by the US president was Brexit Party leader Nigel Farage, who came out on top during the European Parliament vote that took place on 23-26 May. Hailing the UK's decision to leave the EU, Trump opined, speaking to The Sun, that Farage should be involved in the Brexit talks.

Dr Mark Shanahan, associate professor and head of the Department for Politics and International Relations at the University of Reading, explained why Trump singled out the two politicians, expressing doubts that the US president "sees very much in their policies".

"Boris Johnson has not revealed his hand fully and Nigel Farage has a party with no MPs and no policies other than to exit the EU", Shanahan said. "That may well be what Trump likes: simplistic, populist ideas that chime with his own rather unsophisticated views. Trump does not like multi-lateral agreements, so if he sees he can lever a bilateral agreement with an old ally by cheerleading for a No Deal Brexit, he will do so. It will play well with Middle America at home, and help forward his America First trade agenda".

With Theresa May stepping down on 7 June without delivering Brexit, the governing Conservative Party is expected to choose a new prime minister among a dozen contenders by the end of July. Johnson is largely seen as the favourite of the contest by the British mainstream press. Previously, on 9 July 2018, Johnson quit as foreign secretary in protest over May's Brexit plan, thus dealing a heavy blow to her government.

Huawei: US 'Economic Imperialism' is 'Inappropriate'

Apart from the prospects of a "big deal", the US president is continuing to persuade Britons to give up cooperation with Chinese telecom giant Huawei, citing security concerns.

© REUTERS / Jorge Silva
Putin: Attempts to Push Huawei Out of World Market is 'Start of Technologic War'
Earlier, May gave the green light to the company to build the UK's 5G networks, prompting criticism from the Five Eyes, an Anglophone intelligence alliance comprising Australia, Canada, New Zealand, the UK, and the US.

Dr Mark Shanahan believes that "whoever succeeds her will almost certainly take a different view on the security of key UK systems if a technology company so close to the Chinese state is involved".

"The pressure from the US to exclude Huawei comes from deeper into the Pentagon and State Departments rather than just from Trump. May's departure is likely to catalyse a change in strategy that will bring the UK and US closer together again as security partners within the Five Eyes (5i) agreement", Shanahan pointed out.

For his part, Dowd bemoaned the American "economic imperialism", stressing that "it is simply inappropriate for the US to pick fights with other countries and then demand that the rest of the world obey the US without question".

The Trump administration blacklisted the Chinese telecom giant on 16 May, giving US companies a 90-day waiver to finish their business relations with Huawei. Washington launched nothing short of an anti-Huawei crusade in 2018, urging its international allies to abandon the company's 5G equipment due to alleged security risks. Huawei rejects the allegations, calling the ban a "lose-lose" decision.