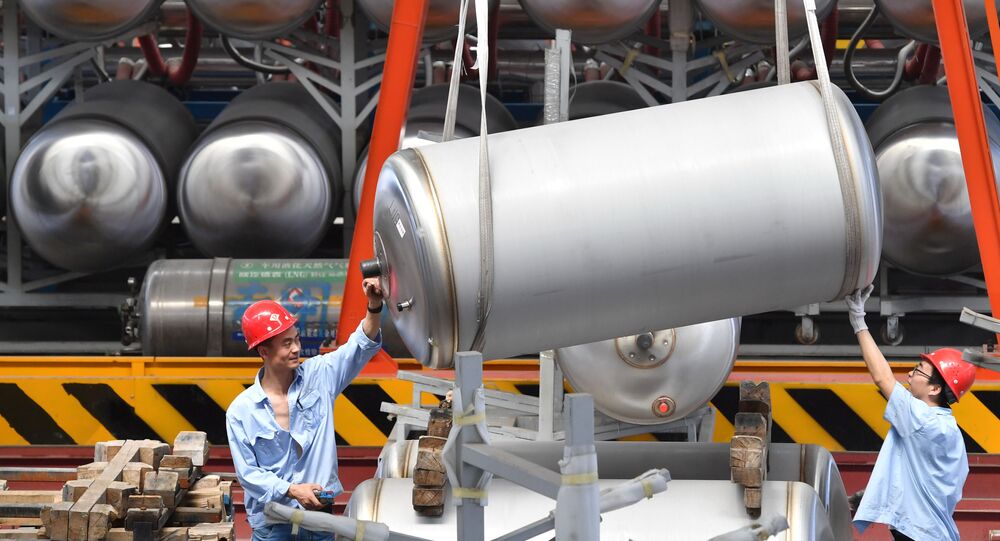 Energy will be one of the main topics at the SPIEF, which opened on Thursday. Over the past two decades, the use of natural gas in the Asia-Pacific region has tripled, making it set to become the global centre for gas trade in the future. China, especially, has an increasing demand for it.

CNPC Chairman Wang Yilin, in an exclusive interview, told Sputnik that global natural gas consumption may reach 4.7 trillion cubic metres by 2030, which is 800 billion more than in 2018 – mostly due to the growth of consumption in APR states. Which countries will become the main consumers and what competitors to natural gas exist? Read in Sputnik’s interview to find out.

Sputnik: What technologies and types of fuel can compete with natural gas?

© Sputnik / Michael Klimentyev
Russia, China to Boost Energy, Agricultural Trade Due to US Trade War – Scholars
Wang Yilin: “Natural gas is a fuel, it is mainly used for heating and energy, indispensable for industrial boilers, household appliances, transport, and so on. In the field of electricity generation wind, solar, hydro, nuclear, and other types of energy are essentially competitors to natural gas. If we talk about the industry, AI can trigger the fourth industrial revolution by changing production methods in the industrial sector. The use of natural gas is highly dependent on a person’s life habits.

Natural gas is expected to be least affected by the technological revolution in this area. In the field of transport, a large number of competitive energy sources have already appeared – steam diesel fuel, electric power, and hydrogen fuel cells – in this area the competition is very high. However, if LNG is used as fuel to provide power output, it can be used on a large scale for commercial purposes, and natural gas will have certain competitiveness in the field of transport”.

READ MORE: China May Regulate Energy Imports from US Amid Trade Row

Sputnik: Which countries of the Asia-Pacific region are potential leaders in gas consumption?

Speaking about other Asian countries, India is now experiencing robust economic growth; very soon it will enter a “golden era” of gas consumption. Pakistan, Thailand, Bangladesh, and other countries, their population is growing, representing a huge potential; gas consumption will surely increase in these countries in the near future”.

© East News / Wei ta/Imaginechina/NYWWP
China May Regulate Energy Imports from US Amid Trade Row
Sputnik: According to Beijing Gas Group forecasts, the demand for natural gas in China this year will increase by 14 percent. The growth of gas consumption is associated with the government of the People's Republic of China’s policy of abandoning coal-based generation and the transition to clean energy. Who can meet the growing demands of China? Which country is most likely to increase the supply?

Wang Yilin: “Promoting a revolution in energy production and consumption, creating a clean low-carbon, and a safe and efficient energy system is the future direction of China’s energy sector. Natural gas is considered to be a relatively clean, low-carbon fossil fuel, and therefore plays an important role in the energy conversion process.

Russia is a neighbour of China; it is rich in natural gas and is the optimal partner of China in the cooperation of the gas industry’s development. According to the “Energy Strategy of Russia until 2035”, we take note of the fact that until this time, the volume of Russian gas exports to the Asia-Pacific region will make up 31 percent.

Russia and China in the gas field have additional advantages, our cooperation has broad prospects. By the end of the year, the construction of the Russian-Chinese gas pipeline will be completed, and in the future, Russia will export gas up to 38 billion cubic metres. Moreover, the CNPC is participating in the Yamal LNG project. So in the near future, Russia will become the largest exporter of natural gas to China.

The views and opinions expressed by Wang Yilin are those of the speaker and do not necessarily reflect those of Sputnik.