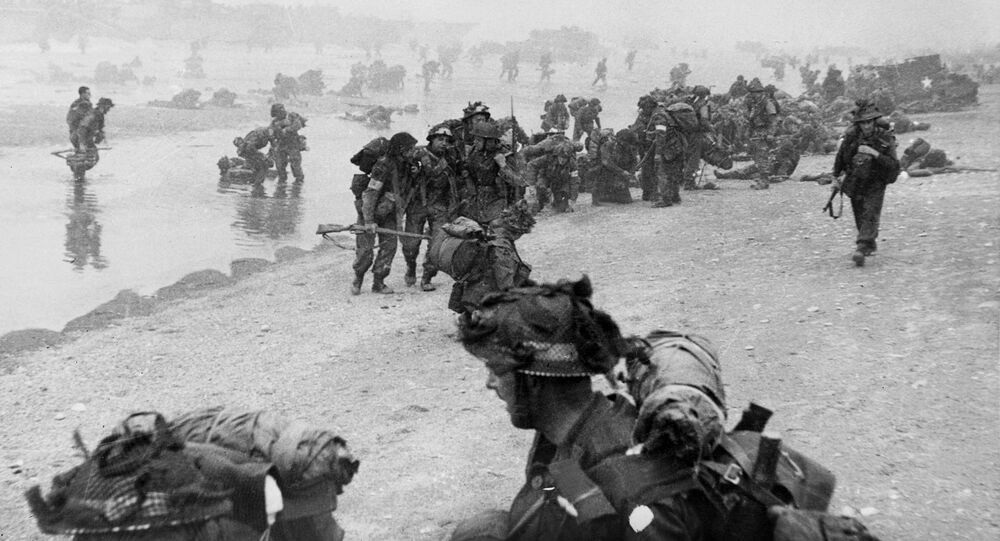 France's President Emmanuel Macron and British Prime Minister Theresa May are at a ceremony to mark the 75th anniversary of the Normandy landings. Sputnik spoke to Ian Kikuchi, a senior curator at the Imperial War Museum, about the importance of the "Second Front".

At a ceremony at Arromanches in Normandy, Theresa May said: "A generation whose unconquerable spirit shaped the post-war world. They didn't boast. They didn't fuss. They served and they laid down their lives so that we might have a better life and build a better world. If one day can be said to have determined the fate of generations to come in France, in Britain, in Europe and the world, that day was June 6, 1944."

May and Macron then watched the first stone being laid at a memorial to commemorate the 22,442 British troops who died in Normandy in the summer of 1944.

On Wednesday, 5 June, President Trump was among 16 world leaders in Portsmouth to pay tribute to the "heroism, courage and sacrifice" of the British, US and Canadian troops who took part in D-Day on 6 June 1944.

Ian Kikuchi, a senior curator at the Imperial War Museum said 159,000 men landed on five beaches in Normandy on D-Day.

D-Day was an international effort with Britain fighting alongside countries including USA, Canada and Poland. To mark D-Day 75, Frank Preston is one of hundreds of D-Day veterans who we are taking back to Normandy. Read his story: https://t.co/2qx7CuxiHh #DDay75 pic.twitter.com/Hpj12U2bgv

​Mr Kikuchi said: "Of the Allied assaulting divisions, more than 4,000 were killed with around 6,000 wounded or missing. Estimates for German casualties range between 4,000 to 9,000,"

Thousands of French civilians who lived close to the invasion beaches were also killed.

The Allies eventually created a beachhead, which slowly expanded as more and more troops came ashore and forced back the German defenders.

The German high command were completely unprepared — indeed Field Marshal Rommel had gone back to Germany to give his wife a present on her birthday, which fell on 6 June, because he felt sure the Allies would not try to land during the bad weather.

#Zakharova: Even if it was late, the opening of the second front was aimed at supporting Soviet troops in their combat missions. In fact, we ended up helping our Western allies who were defeated by the Nazis in the Ardennes. We hope our partners remember this pic.twitter.com/ETHXTJ4kT9

​It was to take another 11 months before Adolf Hitler's forces were finally defeated but D-Day was the beginning of the end for the Nazis.

Mr Kikuchi said: "It's impossible to quantify how close the D-Day landings came to failure. As an amphibious invasion mounted by sea and air, the operation was very vulnerable to bad weather, a risk mitigating by accurate weather forecasting. It's also impossible to know what consequences any failure of the invasion might have had on the course of the war."

Eisenhower asked a soldier if he was afraid: “Well, you’d be a damn fool not to be. But the trick is to keep moving. If you stop, if you start thinking, you lose your focus. You lose your concentration. You’ll be a casualty. The perfect idea, is to keep moving.” #DDay75 #DDay pic.twitter.com/L1RTJ5USf1

​British wartime leader Winston Churchill and the then US President Franklin D. Roosevelt came under immense pressure from the Soviet leader Joseph Stalin to open a "second front" in western Europe.

British and American forces were already fighting the Germans in Italy but Stalin complained throughout 1943 and early 1944 for the Allies to bring forward D-Day.

Mr Kikuchi said: "The D-Day invasion was mounted as soon as the necessary conditions were in place. These conditions necessary for a successful cross-channel invasion included control of the air and sea, and the build-up of sufficiently large numbers of fully trained and equipped forces. The time needed to achieve these conditions led to constant complaints from Stalin, who demanded the opening of a ‘second front' soon after the invasion of the Soviet Union by Hitler in 1941, with whom Stalin had signed a non-aggression pact in 1939."

​Once the Allied supreme commander, General Eisenhower, and the British, Canadian and Free French generals had plumped for June 1944 and Normandy it was a matter of trying to keep the date and location a secret from the Germans, who were defending thousands of miles of French and Belgian coast.

Mr Kikuchi said: "To keep the site of the invasion secret, the Allies knew that operational security was paramount. A wide range of diversionary exercises and deceptive operations were used. A fake army group complete with dummy vehicles and false signals traffic was generated in Kent, as if to invade at Calais. Targets across France were bombed, and not just in the immediate invasion area. Double agents fed false information to German intelligence, such as plans for an invasion of Norway. Air and sea supremacy prevented German reconnaissance efforts."

The Tragedy of Operation Tiger explores the disastrous series of events that led to the deaths of over 1,000 men during rehearsals for the #DDay landing at Utah beach.https://t.co/fdaTbRxdgO pic.twitter.com/7cKa1C3K81

​On 6 June 1944 hundreds of ships and landing craft left the south coast of England and headed for the five D-Day landing sites — the British led the assault on Sword and Gold beaches, while the US spearheaded attacks on Juno, Utah and Omaha.

"Bloody Omaha" had the highest casualty rate — with 4,000 men killed or wounded.

One US unit lost 90 percent of its men in its first wave and it was no coincidence that Steven Spielberg's famous sequence in Saving Private Ryan was set on Omaha beach.