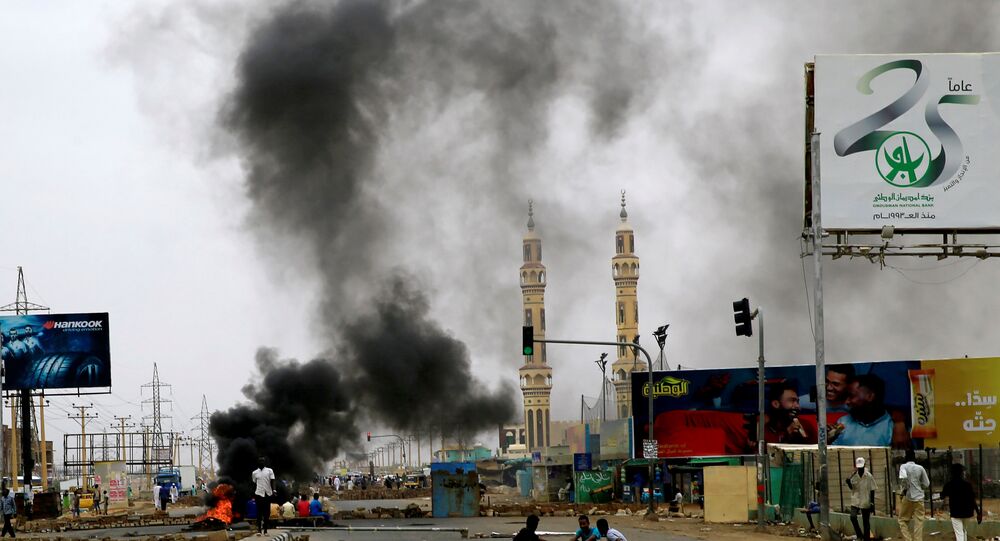 After the Sudanese transitional military government sent troops to disperse a prolonged sit-in protest outside military headquarters on Monday, support for the regime has collapsed once it became known that the troops were the infamous Janjaweed militia, a protester injured in the clashes told Sputnik. Now, protesters have called a general strike.

On Monday, Sudanese security forces attacked the roughly two-month-old sit-in protest outside of military headquarters in the capital of Khartoum, seeking to disperse the thousands of demonstrators occupying the space. At least 35 people were killed.

While the protests have been snowballing since December, key victories were scored in early April when they forced long-reigning dictator President Omar al-Bashir to resign from office, as well as his successor, Ahmed Ibn Auf, just a day later, Sputnik reported. Now they've set their sights on the Transitional Military Council, a collection of high-ranking officers who formed the core of Bashir's brutal regime, in an effort to force the military government to surrender power to civilian rule.

Support for that council collapsed on Monday, one protester told Sputnik, once it became known that the soldiers who attacked the protesters were not just ordinary troops, but the Rapid Support Forces — successors to the infamous Janjaweed tribal militia, which Bashir's government used to perpetrate the Darfur genocide in 2003, killing upwards of 350,000 people in western Sudan.

Following the attack, the opposition alliance Forces for Freedom and Change (FFC) announced a general strike and "full civil disobedience… until the overthrow of the regime," the Sudan Tribune reported.

"The leaders and members of this Council bear criminal responsibility for the blood that has been shed since April 11, 2019," an FFC statement said. "We will work to bring them to fair trials before fair and impartial justice in the victorious Sudanese revolution."

Radio Sputnik's By Any Means Necessary spoke Tuesday with Hajooj Kuka, a filmmaker and member of the Sudanese nonviolent resistance movement Girifna who's been an active part of the protest movement, and with Mac Hamilton, Executive Manager at STAND: The Student-led Movement to End Mass Atrocities.

"So, we started running toward the center of the protest, and we were trying to just like, protect it, and they just kept coming in. Then we started seeing people fall, so we realized that no, they're actually shooting at us. Then, me and a few of us went to — because I do filming and stuff — so we tried to get to our office… to get my hard drive and a few important stuff. And then we got surrounded within that place, so we hid in the office, and they just surrounded us, and we had to come out, and 30 people just went around me and then they hit me in the head, and I started bleeding, and the bleeding was a lot, so they thought I was going to die or something."

Kuka said he had to find first aid at someone's house, since troops surrounded the large hospitals and were beating people who tried to treat their injuries there, before finding his way to a smaller medical center to treat his head wound.

The activist told Sputnik hosts Eugene Puryear and Sean Blackmon that they were attacked by the Janjaweed — a mounted militia that was one of the main perpetrators of the massacres of Fur, Masalit and Zaghawa tribes in Darfur beginning in 2003.

"They were using the same tactics," he said. "They came into the sit-in, they burned the tents, they were beating people up, they were using bullets… they were looting everything.. they took everything I had… they raped a few women, even small kids. I was walking around the end with these kids who were under nine years old, and they were all showing me how they were beaten."

However, despite the ordeal, Kuka said the protesters were committed to pushing the struggle forward.

"What the movement leaders decided is to stop every communication with the army, with the military council, and told everybody there's a general disobedience, so no talking to them. The streets are blocked, nobody's going to work, and the whole country went to a halt. That's what's going to happen until we find out the next movements. I mean, the movement is trying different things, and we're going to have marches, and we're going to try to call for our leadership; we can even try to announce our own government. So we're trying to figure out what we're going to do next."

Kuka said any elections held by the government would be "beyond" fraudulent at this stage. "I mean, we're talking about the Janjaweed. What they did in Darfur, they showed the people in Khartoum, who never actually experienced this, what the Janjaweed really are. So after seeing them, this cannot be a government that can rule us or somebody that we can trust with elections."

"It's not a surprise that they've been able to strengthen themselves in this way to kind of launch this crackdown," she said, noting that Riyadh has hired Janjaweed forces to fight in its brutal war in Yemen. The New York Times reported last December that 14,000 Janjaweed militiamen had been hired to fight "in tandem with the local militia aligned with the Saudis."

Despite US support for those regimes allied with the Sudanese transitional government, there seems to be little tolerance for the heavy-handed crackdown in Washington. US National Security Adviser John Bolton tweeted Monday that the violence was "abhorrent" and that he supported transition to civilian rule, and a Senate Foreign Relations Committee resolution calling for a peaceful transition in Sudan advanced to the Senate floor late last month.

The UK and Germany have also succeeded in starting a closed-door session of the United Nations Security Council on Tuesday.

Hamilton said she hoped the violence would "wake up" potential allies in Washington who oppose US arms sales in support of conflicts like the Saudi-led war in Yemen and convince them to seek an end to US support for the Sudanese military government as well.

Indeed, Kuka said it was meddling by Cairo, Riyadh and Abu Dhabi that caused the Transitional Military Council to "switch" its intentions. "They suddenly became not only interested in real talks… their main thing is they wanted to make sure that Sudan stays in Yemen."

"That's when we realized the Transitional Military Council was just playing us," Kuka said. "In the end they just gave up, and that's when they attacked us." He noted that seven additional protesters had been killed in other areas of Sudan, which because the killings took place on the first day of Eid al-Fitr, the celebratory feasting day at the end of Ramadan, were only enraging Muslims more.