Thousands of protesters gathered for an anti-Trump rally in London earlier on Tuesday as the US president was set to hold a meeting with outgoing UK Prime Minister Theresa May. Sputnik has discussed Trump’s current visit to the UK with former member of the European Parliament Roger Helmer.

Sputnik: First of all, what's your opinion on Trump's state visit to the UK?

Helmer: Well, America is our greatest trading partner, our greatest ally. And we're celebrating 75 years since there were a million Americans here helping Britain to fight fascism. So I think we should be delighted to welcome the President of the United States. I'm aware that some people have concerns about some aspects of his policies. But that really isn't the point at the moment. The point is to celebrate the relationship between Britain and America, which is absolutely fundamental to our security, and indeed, to our prosperity.

Sputnik: What's your opinion about the protests that have been organised against President Trump's visit?

Helmer: I think that's simply disgraceful. I think if you look at Trump's visits around the world, he's been to Japan, he's been to France. There were no major protest then. And I just find it extraordinary that many people on the left in Britain and the Labour Party are prepared to protest against our allies and supporters and friends partners. And yet they will cozy up to dangerous fascistic regimes and to terrorist groups, and seem to have no problem with that. 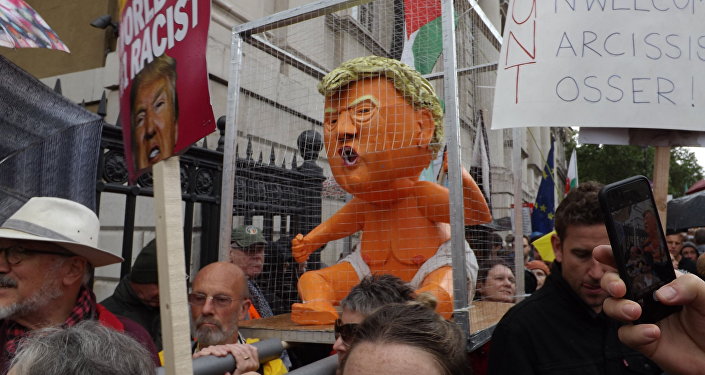 © Sputnik / Demond Cureton
Trump Calls Reports of Protests in London Against His Visit to UK 'Fake News'
It's about the office. And also, if you do politics, you will have to deal with people that you disagree with. There are people in Britain that I profoundly disagree with no doubt they profoundly disagree with me. But that isn't the right reaction. The right reaction is to discuss the issues and debate the issues and in a democracy, to vote about the issues and about the people who are involved. And just to do these childish protests, and especially some of these grotesque caricatures of the President. They seem to be setting out to undermine the relationship which is absolutely critical to our security and prosperity.

Sputnik: Trump's a very outspoken politician, and he's made a few comments about British politicians such as Boris Johnson and Sadiq Khan. Do you think he's within his rights to say these things?

Helmer: Well, let's think back to the Obama administration. President Obama came across three years ago when we were having a referendum on Brexit. And he delivered a speech, I think it was probably written by David Cameron, but he delivered a speech taking one view on Brexit. And you could well have said, hang on what for the American president doing interfering in a British decision of this kind. Nobody did or nobody very much got excited about it. When President Trump expresses a view. I know it's contrary to diplomatic protocol. But I really can't see, you know, we allow President Obama to express his view on Brexit. And clearly, President Trump is expressing his view on Brexit.

Sputnik: Just to touch on something you mentioned, you mentioned the gross caricatures of Trump, I assume you're talking about the inflatable Trump baby.

Helmer: Indeed, which somebody on social media pointed out looks a great deal more like, what's the name Emily Thornberry than it does, President Trump.

Sputnik: What do you think the media's, the mainstream media in the UK, infatuation with this symbol. It's being on Sky News on BBC News. They seem to really celebrate it.

© REUTERS / Peter Nicholls
OUCH! Donald Trump Appears to Snub Theresa May's Handshake
Helmer: Well, they do. And I think that's a reflection of the left wing tendency of so much of the media. I mean, I think it is disgraceful. He is not only Trump is not only the president, but as president, he is the head of state. Can you imagine the reaction is the queen we're going to America and people put up caricatures of the Queen and criticize her? You know, it's just, it's just shocking.

He represents the country, which as I said earlier, sent a million men and women to help us during the Second World War, to fight against fascism. And we are partly at least remembering those who fought and those who didn't come back, and to use that as an opportunity for cheap and insulting political jibes; I just think is disgraceful. What it does show is that Labor is not fit to govern. Can you imagine if we had a Labour government that took that sort of attitude to our largest ally and trading partner?