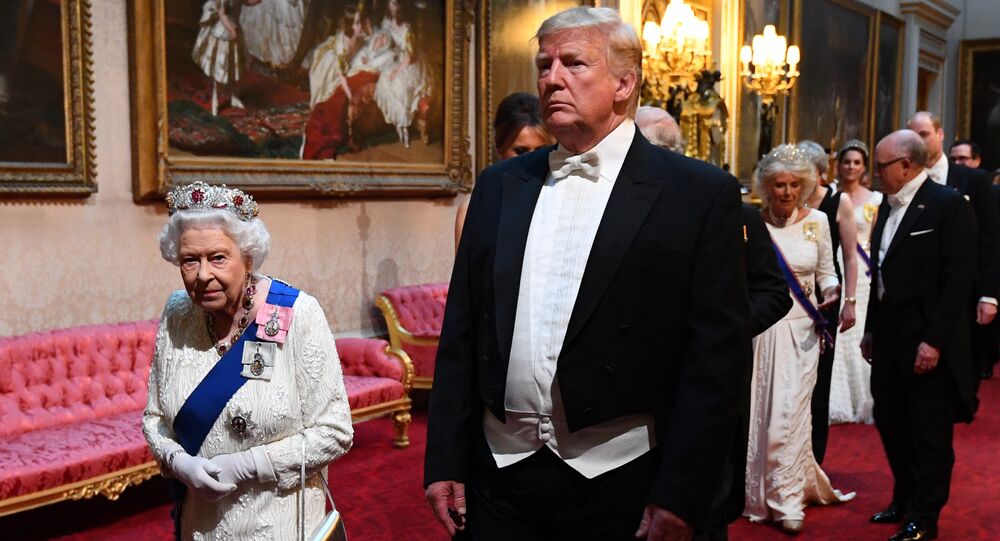 Monday marked the first day of US President Donald Trump’s state visit to the UK, but between backing Boris Johnson, dissing London’s mayor and dodging droves of protesters, Trump’s enigmatic leadership style continues to set him apart from his predecessors.

"Last time he came it was purely a diplomatic visit. This time they couldn't put off the state visit any longer. I think his table manners have let him down, and he's not been honored with sleeping in Buckingham Palace," anti-war activist and former British parliamentarian George Galloway told Radio Sputnik's Loud and Clear Monday.

After thousands of protesters and the notorious "Trump Baby Blimp" made appearances during Trump's visit to London last year and made the US leader "feel unwelcome," according to his 2018 interview with The Sun, particular precautions were undertaken this time around.

Part of this untraditional visit included foregoing a ride in the golden carriage down the Mall.

"No point in subjecting the president of the United States to the direct protests of people on the horse guards on the Mound, with the soldiers there and so on. So I think an attempt has been made for practical purposes to make a state visit, but as little of a state visit as possible." Galloway said.

"There will be big protests. Many of them will be perfectly justified and clear in conscience as they do so."

Though Conservative Party leadership candidate Boris Johnson has Trump's support today, host Brian Becker pointed out that was not necessarily something Johnson would have always welcomed.

"Boris Johnson used to call Donald Trump an idiot, but now they're best buds. I guess he's all about Boris Johnson."

"He's intervened in British politics in quite an unseemly way. He's actually endorsed the next British prime minister. He certainly does diplomacy in a very unusual way," Galloway noted about Trump, who is expected to meet privately with Johnson during his visit.

The former parliamentarian also highlighted the hypocrisy of some demonstrators.

"I just make the point that very few of them will have picked up placard against the visit of the crown prince of Saudi Arabia. Neither would they have protested Barack Obama, who has killed a lot more innocent people than Donald Trump has — so far. And Hillary Clinton came and went here, without a single protester against her, even though Libya, which she masterminded, is now a marketplace for black people being sold into slavery. So, there's a measure of hypocrisy about it all," Galloway asserted.

"But hey, Donald Trump is a plump and inviting target for those of us who hate imperialism."