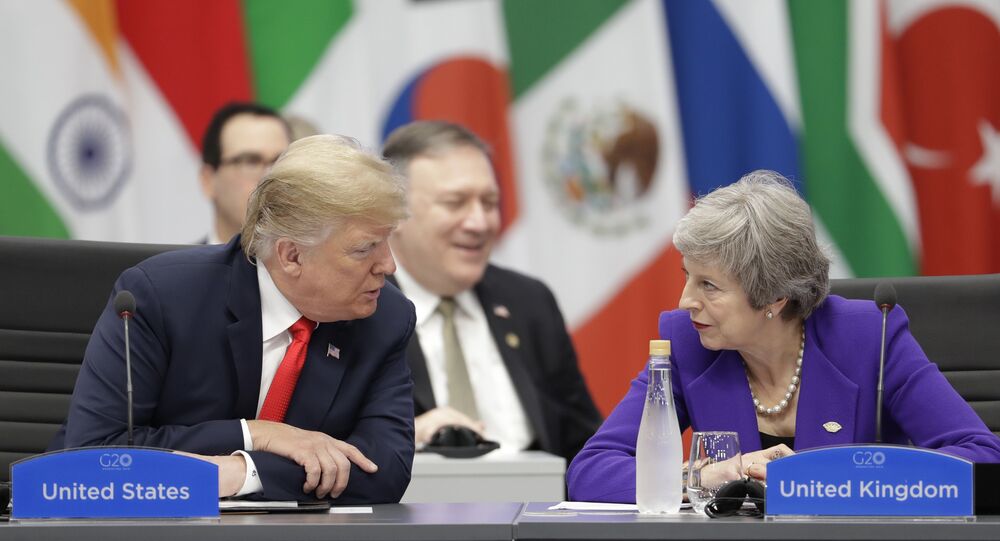 Just before British Prime Minister Theresa May steps down from her post on 7 June, she's got one more important guest to receive in the United Kingdom – US President Donald Trump is coming over for a 3-day state visit commencing on Monday.

Ever since the UK electorate voted to leave the European Union almost three years ago, the inability of the British leadership to deliver Brexit has plunged the country into a deep crisis.

Trump has been one of May's biggest critics for her handling Brexit. The PM eventually fell under the pressure and announced her resignation as the Conservative Party leader on 24 May. The Tories are now in the midst of an intense race that will decide the next party leader and UK PM.

Mr. Parmar noted that the former Foreign Secretary "Boris Johnson is the favourite and backed by Trump." In an interview Friday with The Sun newspaper, the US president reaffirmed his support for him: "I think Boris would do a very good job. I think he would be excellent," Trump said.

These comments didn't go down well with Labour Party leader Jeremy Corbyn, who took to Twitter to criticize the US president for his 'interference' in UK domestic politics:

President Trump’s attempt to decide who'll be Britain’s next PM is an entirely unacceptable interference in our democracy.

The next PM should be chosen not by the US president, nor by 100,000 unrepresentative Tory party members, but by the British people in a general election.

​"President Trump's attempt to decide who will be Britain's next prime minister is an entirely unacceptable interference in our country's democracy.

The next prime minister should be chosen not by the US president, nor by 100,000 unrepresentative Conservative party members, but by the British people in a general election,"  Corbyn said.

The Labour leader has also refused to attend the state banquet at Buckingham Palace in honour of Trump. While Trump, in an interview with the Sunday Times, called this decision a "mistake," adding that Corbyn "would want to get along with the United States" as he might be the next PM.

© AFP 2021 / Oli SCARFF
Establishment Cover Up? Farage Says Brexit Party 'Hidden' in Shock YouGov Poll
Talking about Brexit, Trump advised that the Conservatives include Nigel Farage, head of the Brexit Party, in the negotiations with Brussels:

"I like Nigel a lot. He has a lot to offer — he is a very smart person," the US president said. "They won't bring him in but think how well they would do if they did. They just haven't figured that out yet."

He also suggested that Britain has to "get it done" and "get the deal closed." But at the same time if they don't get what they want they should "walk away," he said.

Inderjeet Parmar explained why Trump is so keen on the UK leaving the bloc.

"Trump aims to weaken EU, slicing the UK away from it, weakening both, and strengthen US position to open up UK markets, especially in finance and NHS, food, amid far less regulation of quality," the professor stressed.

READ MORE: Trump Regrets That EU Being 'So Tough' on UK Over Brexit

Just last month, Trump accused the EU of being "tough on Britain" and being "a brutal trading partner with the United States", amid trade tensions between the US and the EU.

Too bad that the European Union is being so tough on the United Kingdom and Brexit. The E.U. is likewise a brutal trading partner with the United States, which will change. Sometimes in life you have to let people breathe before it all comes back to bite you!

​But as Mr Parmar explained, Washington needs Europe as relations with China deteriorate.

"The trade war on China suggests US needs allies to back its pressure and containment of China's 'Made in China 2025' hi-tech programmes",- Mr Parmar said.

After blacklisting Chinese telecom giant Huawei in America, labelling it a threat to national security, Trump also told the Sunday Times the UK must be "very careful" about involving it in its 5G network and not to jeopardise intelligence-sharing between Washington and London.

The situation in Iran will also be discussed during the state visit.

"Iran is also on agenda as US military and economic pressure grows on Tehran and UK backs up US against so called Iranian military threats," the scholar said.

Mass protests are expected over Trump's visit. Thousands of people are set to take to the streets of central London, but despite it being "a controversial visit with mass opposition expected", Professor Parmar believes that "the UK and US are very close strategically, economically and culturally, and have a deep and long-term alliance even if UK is a junior partner."

The views and opinions expressed by Inderjeet Parmar are those of the expert and do not necessarily reflect those of Sputnik.