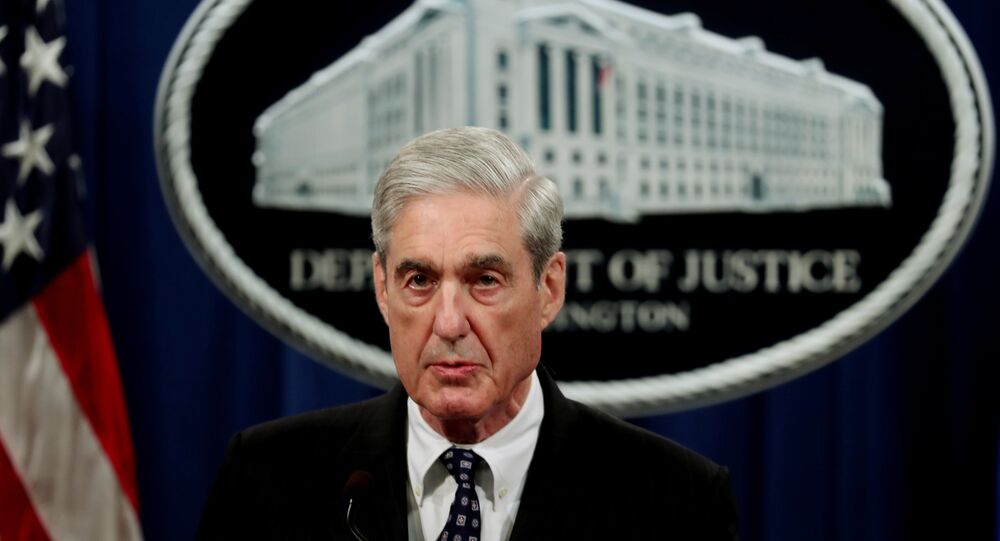 Former US Special Counsel Robert Mueller has stated that he is resigning from the US Justice Department after the conclusion of the Russia investigation. Chadwick Moore, journalist and conservative commentator, explained what were the reasons behind Mueller's public statement.

Sputnik: Did Robert Mueller announce anything new? What were the reasons behind this public statement?

Chadwick Moore: No, he didn't explicitly announce anything new. It is not a prosecutor's job to prove someone is innocent, it is their job to find wrongdoing. Instead, his strange message suggested, where obstruction was concerned, "President Trump is not not guilty." Yet his two year long, $35 million probe, conducted in an office stacked with Hillary fanboys, came up with squat. He seems to be suggesting that an innocent man now needs to prove his innocence. Or perhaps he was dog-whistling to Congress. This is, of course, not how our justice system works, it is how totalitarian governments work. The media and the Democrats are, nonetheless, trying to suck the blood out of this stone.

© AP Photo / J. David Ake
‘Big Stretch’: Mueller’s Claim That Indicting Trump is ‘Unconstitutional’ Sits on Shaky Ground
Sputnik: It's been reported that almost all Democratic candidates (Beto O'Rourke, Cory Booker and Pete Buttigieg) are now officially backing impeachment. Do you think we can expect this legal process from the House of Representatives?

Chadwick Moore: A crime must be committed in order for impeachment proceedings to go underway. What was the crime? Can any of the point to a crime? No, they can't. They are such a worthless bunch of hacks they continue to offer no vision, no leadership, and no palatable alternative to President Trump's policies. They think Democrat voters are stupid, and so they feed them a steady diet of fear, anger, and false hope. Calling for impeachment is an emotional argument with no basis in reality. Therefore, it's perfect for the Left.

Members of Congress, however, can be removed by a process called "expulsion" as laid out in Article 1 of the Constitution if they have been perceived as disloyal to the United States. Adam Schiff directly lied to the American people and said he had solid proof of "Russia collusion." Maxine Waters has called for violence in the streets against Trump supporters. Ilhan Omar is anti-Semitic and asks for leniency for ISIS* recruits. The Russia probe was an attempted coup. That may be treason, and we all know what the punishment for treason is.

Sputnik: Do you think the so called "Russiagate" will become a major topic in the Democratic primaries? How do you explain Mueller's desire to not testify before Congress?

Chadwick Moore: Yes, it probably will. Because their entire party is a race to the bottom of who can virtue-signal their hatred of President Trump the loudest, and drum up the most fear. Mueller is under no obligation to testify before Congress. He's produced nearly 500 pages in a report. Can Democrats read? It's a valid question considering so many who come out of Democrat-controlled public schools can't.

© Sputnik /
Mueller Resigns but the Russiagate Conspiracy Hoax Lives On
READ MORE: Nothing New From Mueller Statement, It's Now Up to Congress

Sputnik: Could Trump and his team use the impeachment card in his 2020 presidential campaign? What will happen if Democrats are unable to get a majority in the House of Representatives?

Chadwick Moore: The Democrats and the media are doing an outstanding job of destroying themselves. Trump doesn't have to lift a finger.

Sputnik: With Robert Mueller having concluded his long-running investigation, how likely is it that both political camps will find common ground in the US?

Chadwick Moore: You're joking, right? We haven't seen anything yet. The Democrats are junkies for power. They are drug addicts who've had their fix taken away. They will lie, cheat, steal, and kill chasing that high. They aren't letting up. They need Jesus, or Candy Finnigan from "Intervention."