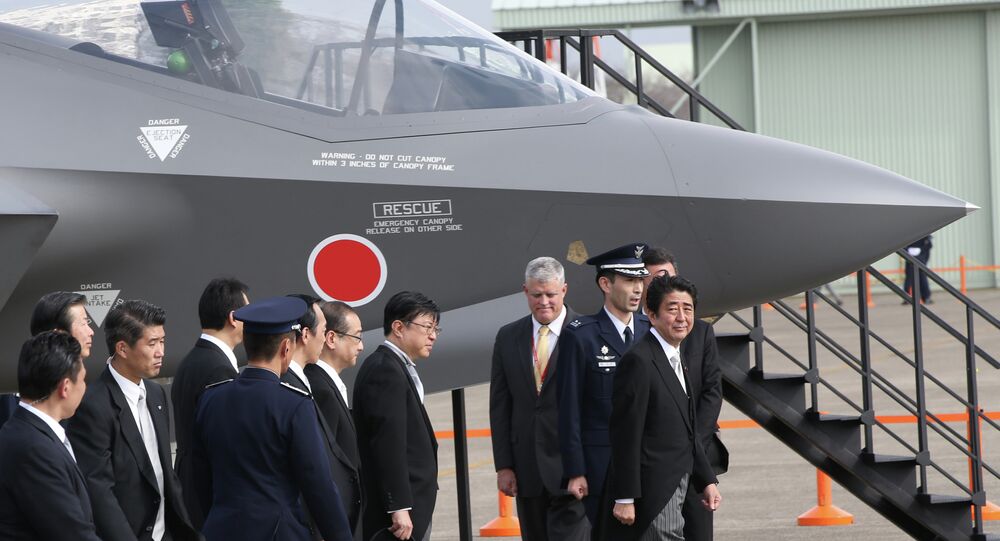 Japan's intention to purchase dozens of US-manufactured F-35 stealth fighters offers Tokyo the opportunity to potentially move away from its Peace Constitution, Emanuel Pastreich, the founder and director of The Asia Institute, told Sputnik.

"I don't know, and, in fact, most of us don't know what specifically they're talking about with trade agreements, but what we did come away from was that the Abe administration agreed to buy 105 more F-35 fighter planes at an extremely inflated cost," Pastreich told Radio Sputnik's By Any Means Necessary on Tuesday.

"In Japan, this is a great opportunity to get away from the Peace Constitution, away from cooperation and increase the role of the [Japanese] military."

"The United States supports Japan's efforts to improve its defence capabilities, and in recent months, we have greatly expedited the sale of large amounts of defence equipment to Japan, made in the United States," Trump said before declaring the duo's latest deal.

"We make the best equipment in the world… This purchase would give Japan the largest F-35 fleet of any US ally."

Pastreich told hosts Eugene Puryear and Sean Blackmon that the F-35 deal is seen by many as "being a sort of payoff at one level or another," and that it shows a shift in how deals between top leaders are being made.

"It suggests the way institutions have changed. That, you know, it's this high level swapping between these top leaders. We don't have any sense that there were mid-level professionals involved in this, and we also see that the trade is being increasingly linked to military issues," Pastreich explained.

Ultimately, Abe's administration and other officials "want Japan to have its own military and its own policy," Pastreich told Puryear. "I think they're probably very enthusiastic about embracing Trump and the US-Japan alliance in that it allows them to break out of their — what they imagine — shackles and remilitarize."

Japan enacted its new post-war constitution in 1947, and under Article 9 of that document, the island nation outlawed using war as a means to settle international disputes involving the state. It effectively barred Japan from maintaining land, sea and air forces, however, the Japanese government eventually established the Japan Self Defense Forces (JSDF).

The Japan Times reported that the matter of whether or not the JSDF violates Article 9 has been debated by experts for years, but that, according to the government, the military force is not unconstitutional because its self-defence capabilities are "less powerful with more restriction that the ‘war potential' mentioned in Article 9."

In the end, Trump walked away from his four-day visit to Japan without any concrete trade agreement with Japanese officials, instead indicating that the US and Japan would "probably" make trade announcements sometime in August 2019.

Trump's remarks, however, were downplayed by Toshimitsu Motegi, Japan's economy minister, who told reporters at a cabinet meeting on Tuesday that Trump's commentary highlighted POTUS' desire for quick negotiations rather than a set timeline.

The US and Japan have been engaged in months-long discussions over potential tariffs on automobiles and car parts. Earlier this month, the Trump administration announced a six-month delay on auto import tariffs with Japan, directing US Trade Representative Robert Lighthizer to pursue negotiations with Tokyo.

When in Rome: Teetotaler Trump Gets Toasted With 'Champagne' in Japan