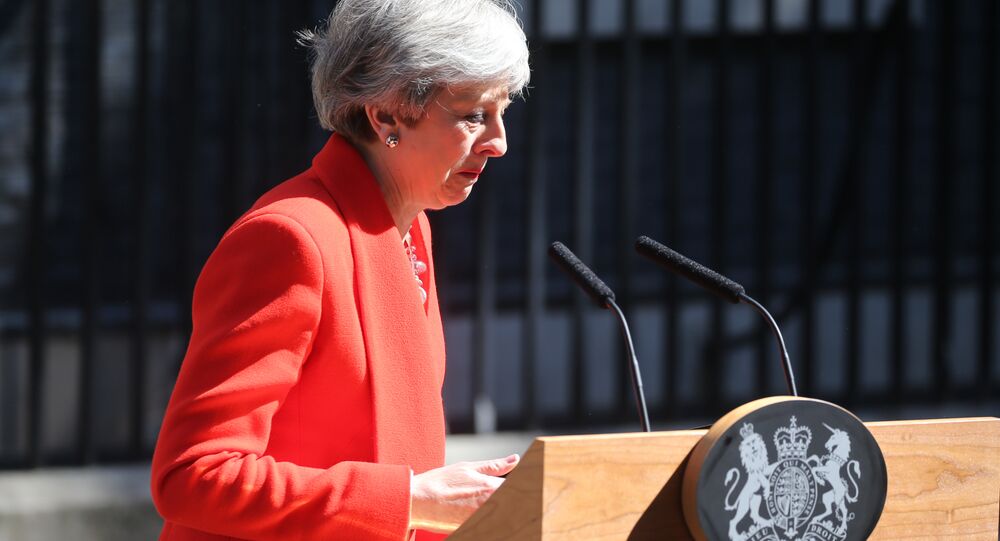 British Prime Minister Theresa May has announced that she will leave office on 7 June. But has her failure to deliver Brexit already damaged the Conservative Party’s reputation with voters beyond repair?

Sputnik discussed the issue with Alistair Jones, an associate professor and teaching fellow in the Department of Politics at De Montfort University Leicester.

Sputnik: Was Theresa May's resignation as prime minister a surprise? Who could her replacement be?

Alistair Jones: It was a bit of a surprise to come now, as I was expecting it to come after the election results after the weekend. But with the Andrea Leadsom resignation, there was a possibility that it would come sooner, and cabinet members had been saying that they were not happy; that there might have been more resignations — but I think that her deciding to go is still a surprise.

© AP Photo / Rui Vieira
Is UK Heading For an Early General Election After Theresa May's Resignation?
As to who is going to take over, it's really difficult to predict. If we were to go on a straight popularity poll, Boris Johnson wins hands down. The problem that we have, though, is the Tory Party rules; so, as many MPs as they want can stand if they get nominated, and then the MPs themselves vote in a series of elections, eliminating the last place person again, again, and again, until there are only two left.

If Boris Johnson is one of those two, he will win. If he is not, it's impossible to guess who it might be. It could be, for example, someone such as Andrea Leadsom, who got to the final pairing last time around; it could be someone like Dominic Raab.

What we're going to see in the Tory Party is the extent to which they are split between hard Brexiteers, the Dominic Raabs, the Jacob Rees-Moggs, the Boris Johnsons, and those that want a much softer approach such as the likes of Amber Rudd, or maybe Jeremy Hunt.

Reuters / Eddie Keogh
Twitter Erupts With Meme Mania Over Prime Minister Theresa May's Resignation
It's going to be impossible to predict. It will depend, maybe,, upon the first round of voting — so if there are 15 to 20 candidates, and a few of them only get, say four of five votes, it's where they take those supporters. Boris Johnson has already been making lots of positive noises about moving back to the centre ground, in the hope of persuading Amber Rudd to bring her supporters in line with him, in return for which she will probably get a senior government post, such as chancellor of the exchequer, or something like that.

It's going to be clear quid pro quos, but this could take the entire summer.

Sputnik: How will the future of Brexit pan out following Theresa May's departure?

Alistair Jones: If it is Boris Johnson who replaces Theresa May, then the likelihood is we will have a no deal Brexit, where we will go on WTO trade rules, and very few countries in the world are actually doing that.

© REUTERS / Simon Dawson
A 'Game of Thrones': What Happens To Brexit After PM May Leaves No 10?
If it is someone such as Amber Rudd, then the likelihood is that it will be a much softer form of Brexit; but the question then comes back to the issue of the backstop for Northern Ireland, and any deal that is being done has that as a problem.

If we leave without a deal, then the backstop is not there, but we have a hard border, and that then has a huge impact upon the peace process in Northern Ireland and relationships with the Republic of Ireland. So there are a lot of issues.

It'll come down to the personality of the person involved, so the more hard a Brexiteer they are,  the more likely we will end up with a no deal Brexit; the more remainer-ish they are, there is a faint likelihood of possibly revoking Article 50.

It may be the case that if the Conservative Party is so split, that a private member's proposal to revoke Article 50 is put to the House, and that may actually get passed.

The views expressed in this article are solely those of Alistair Jones and do not necessarily reflect the official position of Sputnik.