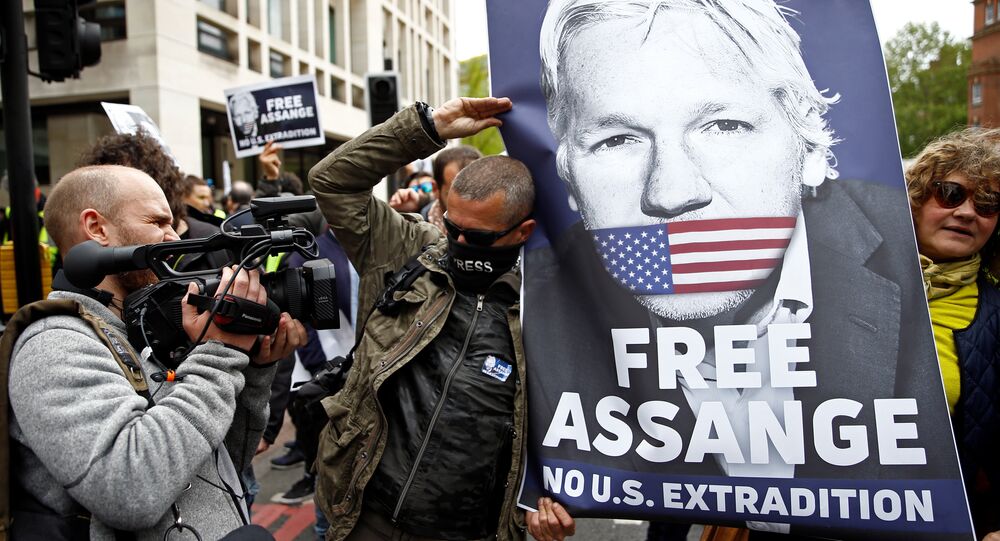 On Thursday, the US brought 17 more charges against WikiLeaks founder Julian Assange, including that he violated the Espionage Act by publishing documents leaked by Chelsea Manning. However, the way the Justice Department broaches the subject, most journalism could be seen as espionage, a reporter told Sputnik.

Assange was charged in April for allegedly helping Manning to break into a US government computer in 2010 so she could steal the files subsequently published on WikiLeaks that exposed how the US government covered up war crimes in Iraq and Afghanistan. However, that indictment carried a relatively small charge of only a couple of years in prison.

This time, however, the slew of charges brought by the US Department of Justice in a superseding indictment on Thursday could potentially put Assange behind bars for 170 years, according to the Washington Post.

The first indictment contained a veiled reference to the Espionage Act, as Consortium News editor-in-chief Joe Lauria pointed out to Sputnik, by citing US Code § 793: Gathering, transmitting or losing defense information.

Prosecutors now allege that by publishing Manning's stolen documents, Assange "put innocent people in grave danger simply because they provided information to the United States." They also allege Assange encouraged people, including Manning, to steal classified information highly sought by WikiLeaks, by creating a "most wanted" list of damning documents.

"This raises the stakes insanely," award-winning investigative reporter Greg Palast told Radio Sputnik's The Critical Hour Thursday. "This is saying he's a spy — it's espionage — and that somehow, he knew this would be used by the enemies of the United States. Well, you could say that about [Bob] Woodward and [Carl] Bernstein breaking the Watergate story that, you know, the rest of the world who didn't like [US President Richard] Nixon or the United States said, ‘Look at Nixon, he's undermining American democracy.'"

​"This is the law used to get people who give away our secrets and sell them to foreign powers," Palast said, noting the Espionage Act was "history."

© AP Photo / Markus Schreiber
‘They Clearly Need Something From Her’: Manning Could Delay US Superseding Indictment Against Assange

By contrast, by publishing the information instead of selling it, a person becomes part of the press, Palast noted.

The act was created in 1917, during the height of World War I, and has been "used, always, to silence dissent," he said, noting that some of the people charged under the act were Socialist Party leader Eugene Debs in 1919 and military analyst and whistleblower Daniel Ellsberg in 1973, after he leaked the Pentagon Papers to the press. However, the judge presiding over Ellsberg's case rejected the premise, saying, "We don't have an official secrets act in the United States," Palast recalled.

Palast said the way the DOJ was defining espionage in this indictment was different from the way it had been defined previously, and now could be read as including the vast majority of journalism — including his own reporting on the US election.

WikiLeaks is "a news service," Palast said. "It's like charging an AP reporter because AP put out a story. The difference is that WikiLeaks has a lot more guts than AP."

Palast noted that Manning released diplomatic cables, not Defense Department cables, which showed the great lengths to which the US government went to cover up bad press about the US and its allies.

"They've had this case now for years. They haven't been able to show a single instance in which all of the material released by Manning through WikiLeaks has harmed the United States' national security in the least," Palast noted, rejecting the idea that someone reading the information could figure out who the sources were.

"I hate to say it, but it's not the job of a journalist to protect secrets of the government, and if they weren't lying to us consistently, systematically, there wouldn't be the need to release these documents," Palast told host Dr. Wilmer Leon. "We have a First Amendment for a reason, and it doesn't say ‘unless it's embarrassing to the US government,' ‘unless Hillary Clinton doesn't like it,' ‘unless it makes it difficult for the State Department to play the games it plays.' I'm sorry, there's nothing in the First Amendment that says it has to be nice or kind or helpful to the US government."

Palast said the effects of targeting Assange would trickle down, noting how it's already having an effect on a leak investigation in San Francisco, where journalist Bryan Carmody recently had his house raided by sledgehammer-wielding police looking for a leaked police report on a public defender's death that had been published by local news earlier this year.

Carmody, like Assange, has had his plight dismissed by being slandered as "not a real journalist," Palast noted.

However, Palast dismissed the idea that US President Donald Trump's administration, or his anti-press rhetoric, represented a sea change for the US state's disposition toward journalists.