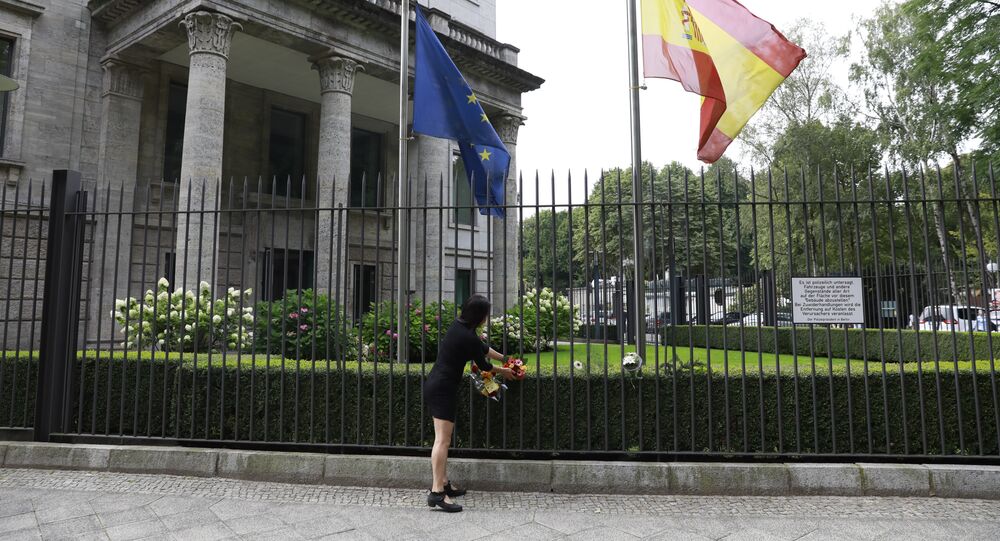 Spanish MP on EU Vote: 'European Identity is at Stake'

European Parliament elections are just around the corner; the vote will be held on 23-26 May in all 28 EU nations. It is slated to demonstrate whether the populist and eurosceptic parties that have been gaining support in national elections will do as well on the European level.

In the UK, Nigel Farage's Brexit Party is expected to gain the most votes, as the country failed to deliver Brexit on time and is required to take part in the EU elections despite its planned departure from the bloc.

Will the establishment parties, as some analysts suggest, lose their majority across Europe? Spanish politician Sergio Pascual, an MP representing Seville who is First Secretary of the left-wing Podemos party as well as an analyst at CELAG (the Latin American Geopolitical Strategic Centre) believes that eurosceptic parties could win a third of the seats:

"European identity is at stake. It is possible that a third of the elected MPs will be eurosceptics, that is, willing to split Europe. This is not a majority, but a significant number. They will be a major force in Italy, France, and Poland," Pascual said.

He also expressed the belief that the eurosceptic parties won't succeed:

"I think that Europe may be faced with a five-year complex blockade in order to be able to work to defend democracy and the ideals that our continent is known for. But I still hope that this won't happen and Europhobia and xenophobia will fail in the elections that will be held on the 26th [of May]."

© AP Photo / Virginia Mayo
Spain Bars Ex-Catalan Head Puigdemont From Running in EU Parliamentary Elections - People’s Party
General elections in Spain last month saw the Socialist PSOE gain seats, making it the largest political party in the national legislature. Another big winner was the populist, anti-immigration party Vox, which won seats for the first time in the elections. However, experts note that in Spain, unlike in other European nations, the rise of the right-wing populist party had to do with the backlash against Catalan independence. Pascual stressed that people voted for unity in the country:

"First of all, Spanish society asked for some reconciliation and someone who would take over the reins of power after a period of considerable instability. Second, the Catalan independence movement didn't gain as much as it expected".

The Spanish politician said that although the Socialists won the most seats, they will need help to form a government:

"The Socialist Party (PSOE) would like to govern alone, but mathematics and arithmetic show that if it doesn't reach a legislative agreement to stabilise its government with Unidas Podemos, it will have a difficult time… Its the start of a period that I call 'collaborative suspicion', when both parties do not trust each other, but they know that they must cooperate", he explained.

Relationships between Spain and Latin America

Amid the ongoing crisis in Venezuela, Spain's Socialist Foreign Minister Josep Borrell has criticised the US's handling of the situation in the country. Despite recognising, not without hesitation, Venezuela's opposition leader Juan Guaido as interim president, Spain's government refuses to condone any attempt at a military coup, and according to Borrell, the solution to the crisis can only be "peaceful, negotiated and democratic".

Pascual said that with regard to Latin America, there's "a continuation of a certain shift in terms of respecting the sovereignty of various countries and determining their future".

© AFP 2020 / Getty Images / Justin Sullivan
'EU is a Joke': European Commission Roasted Over 1984-Style Pre-Election Tweet
Commenting on the poor recent performance of Spain's centre-right People's Party (PP), which lost approximately half of its seats in the recent elections, he noted that "the subordination of the People's Party to Washington's policies is well-known". According to the lawmaker, the Socialist Party (PSOE) has at least demonstrated that it has its own government policy on the matter.

Views and opinions, expressed in the article are those of Sergio Pascual and do not necessarily reflect those of Sputnik.