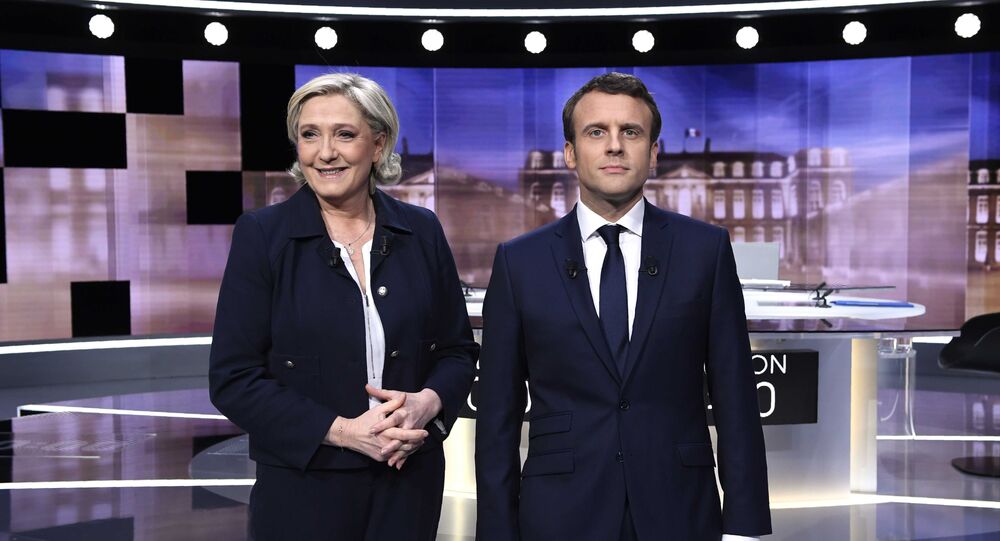 French President Emmanuel Macron's Republic on the Move is projected to lose to Marine Le Pen's National Rally in the upcoming European Parliament elections. Karel Vereycken, vice-president of the Solidarity and Progress Party, has shared his views on the French president's political future and the outcome of the vote.

"By ordering his party to put his picture on their election posters, French President Emmanuel Macron himself transformed a European election into a national referendum on his credibility as a European and a French leader", says Karel Vereycken, a French journalist and vice-president of the Solidarity and Progress Party.

A recent Politico Poll of Polls indicates that Marine Le Pen's National Rally is outpacing Emmanuel Macron's Republic on the Move with 23.6 percent versus 22.74 percent. The potential defeat in the European Parliament (EP) elections, which is due to take place on 26 May in France, would deal a serious blow to the French president's EU ambitions that he outlined in his "Renewing Europe" op-ed on 4 March. Earlier, the French president's approval rating plummeted amid the Yellow Vests protests, which have engulfed the country since November 2018.

"Similar to his attitude towards the Yellow Vests, he denies the simple fact that a Republic is much more than its bright elite and is composed of a majority of hardworking people, tired of Orwellian pep-talk in favour of the kind of neo-liberal reforms driving them increasingly into poverty and despair. History teaches us that revolutions start when rebellions remain unanswered", Vereycken opined.

"Marine Le Pen's 'rebranding' seems successful", the vice-president of the Solidarity and Progress Party said. "Without offering any economic competence, her speech of 1 May focused nevertheless on people's real preoccupations, in order of priorities: wages, housing, unemployment and migration".

© AFP 2021 / ludovic MARIN
Macron Reveals Europe's 'Main Enemies' as He Warns of 'Existential Risk' to EU
While Le Pen and Macron's parties are preparing for the EU election endgame, ex-White House chief strategist Steve Bannon arrived in Paris. Speaking to Le Parisien newspaper on 17 May, Bannon predicted that Le Pen and her party would win.

"The arrival of the American 'religious right' guru Steve Bannon in Paris, not Milan, marks the awareness that a major shift is about to occur", Vereycken opined, adding that the French leadership feels uncomfortable with Bannon's arrival.

Marlène Schiappa, the French secretary of equality between women and men, suggested in an interview with CNBC that Bannon was "helping Marine Le Pen" — something that both the ex-Trump adviser and National Rally's leader have strongly denied.

EPP and S&D Coalition Likely to Lose Majority in EP

© AFP 2021 / TIZIANA FABI
European Elections: Salvini Consolidating Right to Reject Federalism & Return to Europe of Nations – Prof
To date, the largest parties, the centre-right European People's Party (EPP) and the centre-left Socialists and Democrats (S&D), have managed to gain a majority of 407. However, according to recent surveys, the coalition may get only 315 seats in May 2019, with the EPP and S&D gaining 171 and 144 seats, respectively. This opens the door to a reshuffle of the established status quo.

At the same time, the rise of the right does not mean their immediate victory in the EP vote — it all depends on what alliances the Eurosceptics will manage to make in the post-elections parliament.

However, according to the French politician, "if the rise of the populist parties will not play an immediate role, it will play a key role in the nomination of the next head of the EU Commission".

Attacks on the Right Shows That Elites are Desperate

Commenting on the recent scandal involving ex-Austrian Vice Chancellor Heinz-Christian Strache, the head of the right-wing Freedom Party (FPÖ), Vereycken expressed surprise that the affair, which appears to be an FBI style "set-up" and occurred in 2017, was suddenly "discovered" a week before the European Parliament elections.

© AP Photo / Rui Vieira
Political Hit Job? What's Behind Financial Scrutiny of Farage's Brexit Party
The scandal erupted after Der Spiegel and Süddeutsche Zeitung released a video on 17 May showing a woman, an alleged Russian-speaking Latvian citizen, who offered Strache to give the FPÖ money in exchange for government construction contracts. According to the media, the meeting took place in July 2017 in Ibiza, Spain.

Much in the same vein, former Labour Prime Minister Gordon Brown accused Nigel Farage, the leader of the Brexit Party, of receiving money through "undeclared, untraceable payments" and called upon the Electoral Commission to launch a probe into the British right-wing party just three days before the EP vote in Britain.

Earlier, on 8 May, Swedish Prime Minister Stefan Lofven accused Hungary's Fidesz of "right-wing extremism" while delivering a speech on the upcoming European vote in the country's parliament. Before that, Lofven called upon the EU to impose sanctions on Budapest over its unwillingness to adhere to the bloc's migration policy.

"Most of such affairs show how desperate the ruling parties are", the French politician noted. "Voters generally see somebody tries to manipulate their vote and will respond correspondingly".